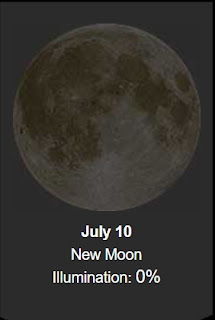 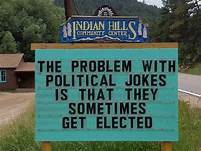 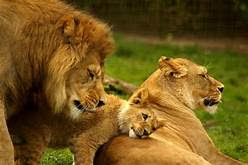 The lion (Panthera leo) is a large felid (a mammal of the cat family (Felidae); a wild cat)  of the genus Panthera native mainly to Africa. It has a muscular, deep-chested body, short, rounded head, round ears, and a hairy tuft at the end of its tail. It is sexually dimorphic; adult male lions have a prominent mane. With a typical head-to-body length of 72 to 82 inches, they are larger than females at 63 to 72 inches. It is a social species, forming groups called prides. A lion pride consists of a few adult males, related females and cubs. Groups of female lions usually hunt together, preying mostly on large ungulates (a hoofed mammal). 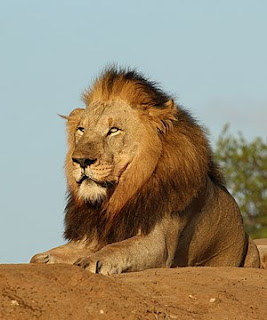 Typically, the lion inhabits grasslands and savannas, but is absent in dense forests. It is usually more diurnal (during the day) than other wild cats, but when persecuted, it adapts to being active at night and at twilight. During the Neolithic period, the lion ranged throughout Africa, Southeast Europe, and Western and South Asia, but it has been reduced to fragmented populations in sub-Saharan Africa and one population in western India. It has been listed as Vulnerable on the IUCN Red List ( The International Union for Conservation of Nature Red List of Threatened Species)  since 1996 because populations in African countries have declined by about 43% since the early 1990s. Lion populations are untenable outside designated protected areas. Although the cause of the decline is not fully understood, habitat loss and conflicts with humans are the greatest causes for concern.

One of the most widely recognized animal symbols in human culture, the lion has been extensively depicted in sculptures and paintings, on national flags, and in contemporary films and literature. Lions have been kept in menageries since the time of the Roman Empire and have been a key species sought for exhibition in zoological gardens across the world since the late 18th century. Cultural depictions of lions were prominent in Ancient Egypt, and depictions have occurred in virtually all ancient and medieval cultures in the lion's historic and current range. 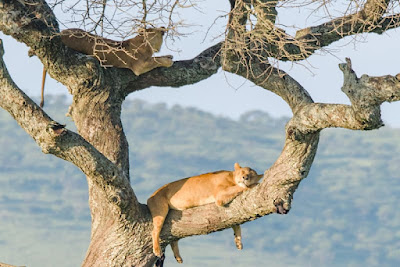 The lion is a muscular, deep-chested cat with a short, rounded head, a reduced neck and round ears. Its fur varies in color from light buff to silvery grey, yellowish red and dark brown. The colors of the underparts are generally lighter. A new-born lion has dark spots, which fade as the cub reaches adulthood, although faint spots often may still be seen on the legs and underparts. The lion is the only member of the cat family that displays obvious sexual dimorphism  (distinct difference in size or appearance between the sexes of an animal in addition to difference between the sexual organs themselves). Males have broader heads and a prominent mane that grows downwards and backwards covering most of the head, neck, shoulders, and chest. The mane is typically brownish and tinged with yellow, rust and black hairs.

The male lion's mane is the most recognizable feature of the species. It may have evolved around 320,000–190,000 years ago. It starts growing when lions are about a year old. Mane color varies and darkens with age; research shows its color and size are influenced by environmental factors such as average ambient temperature. Mane length apparently signals fighting success in male–male relationships; darker-maned individuals may have longer reproductive lives and higher offspring survival, although they suffer in the hottest months of the year.

In Africa, the range of the lion originally spanned most of the central rain forest zone and the Sahara desert. In the 1960s, it became extinct in North Africa, except in the southern part of Sudan.

In southern Europe and Asia, the lion once ranged in regions where climatic conditions supported an abundance of prey. In Greece, it was common as reported by Herodotus in 480 BC; it was considered rare by 300 BC and extirpated by AD 100. It was present in the Caucasus until the 10th century. It lived in Palestine until the Middle Ages, and in Southwest Asia until the late 19th century. By the late 19th century, it had been extirpated in most of Turkey. The last live lion in Iran was sighted in 1942 about 40 miles northwest of Dezful, although the corpse of a lioness was found on the banks of the Karun river in Khūzestān Province in 1944. It once ranged from Sind and Punjab in Pakistan to Bengal and the Narmada River in central India.

If you want to read a lot more about lions, go here: 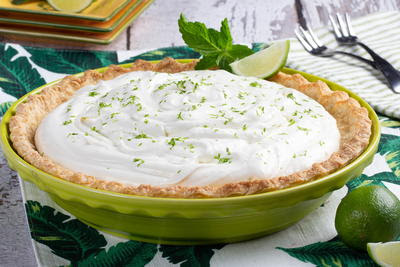 This simple cheesecake recipe tastes as good as Key Lime Pie, but smoother and creamier. Feel those breezes, that warm sunshine? This may not be the same as a few days in the islands but it will sure make dessert time a tropical pleasure.

***Another nice way to serve this is topped with whipped cream or whipped topping and lime wedges; it's sure to look fresh and scrumptious!

Historically this date....
1850 – Millard Fillmore is inaugurated as the 13th President of the United States upon the death of President Zachary Taylor, 16 months into his term.


2005 – Hurricane Dennis slams into the Florida Panhandle, causing billions of dollars in damage. 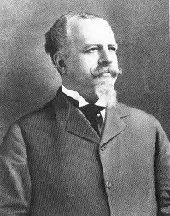 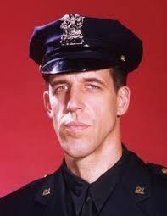 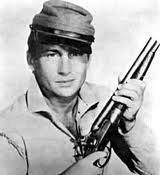 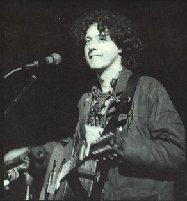 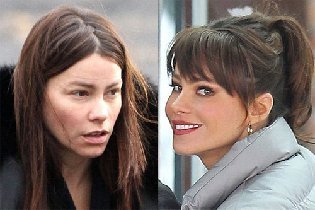 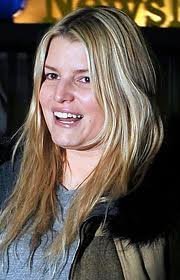 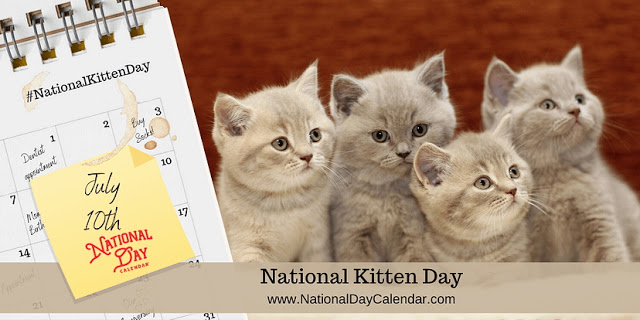 National Kitten Day on July 10th purrfectly celebrates the cuddly warmth of a kitty. The miniature furballs of energy snuggle their way into our hearts with no effort all. Within a flick of their tiny ears, we’re in love.
The day aims to remind us that while kittens are well equipped to find their way into our hearts, many don’t find homes. They’re abandoned at shelters, on the side of the road or wild and feral. Spaying and neutering our pets, including our cats, is vital to their health and keeping the stray population down.
Another goal of awareness campaigns like this one is to encourage adoptions. Instead of purchasing a kitten from a pet store, adopt from a shelter. Many kittens are born in shelters. While their ages may vary, all kittens do become cats.
Follow the shelter’s guidelines. Keep these tips in mind when adopting:
Maybe Fuzzy Bear has health issues or doesn’t get along with children. Perhaps another kitten gets along better with dogs. All these factors will be considered on your application.

Play with your kitten or bring her a new toy. Share a selfie with your kitten. Visit a shelter and volunteer your time. If you are considering getting a kitten, adopt instead of purchasing one.