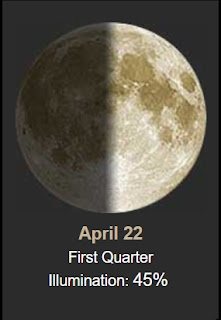 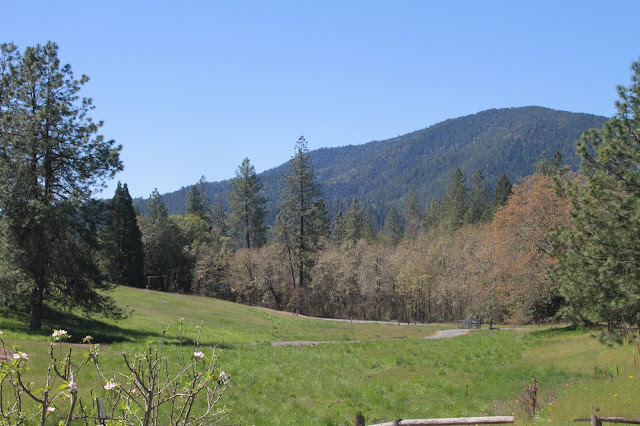 Yesterday the deer were out enjoying this nice weather... 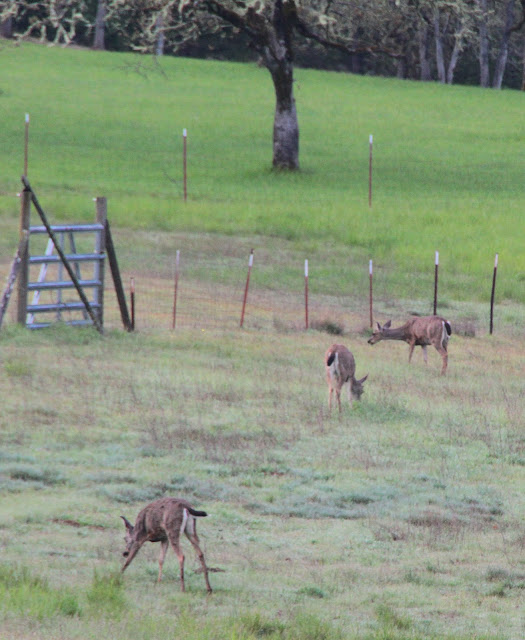 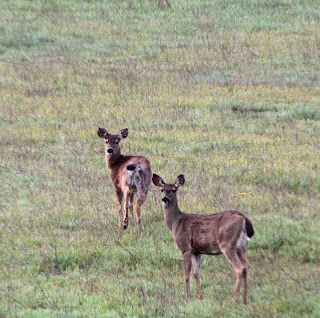 It had warmed to 65º and this deer was resting in the shade! 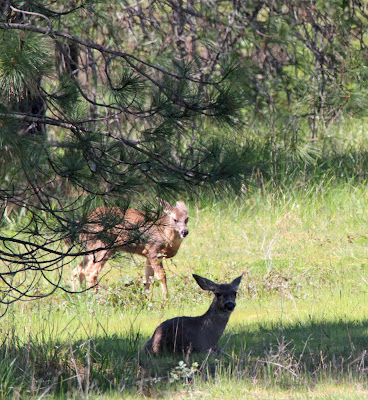 This is a sad story with a good ending. There was this dog in Honduras whose owner ran over him. It caused an open fracture on his right rear leg. The owner wanted him to die and when he didn't, about a week later, the owner brought him into the vet clinic, he was "crying", and dumped him there telling them to euthanize him! The owner left without paying a cent! This was early March. Had he been helped right away he wouldn't have had to have his leg amputated. 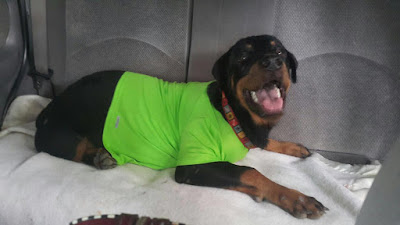 So, at present he's still with his foster mom and will be flown to the US soon and my pal Cathy has adopted him! He will have a super home and lots of love and doggie brothers and sisters. Cathy is a great animal lover and animal mom! Thank you for doing this for Max! ox

I found this site filled with pictures of So. California. Some old and really great ones... 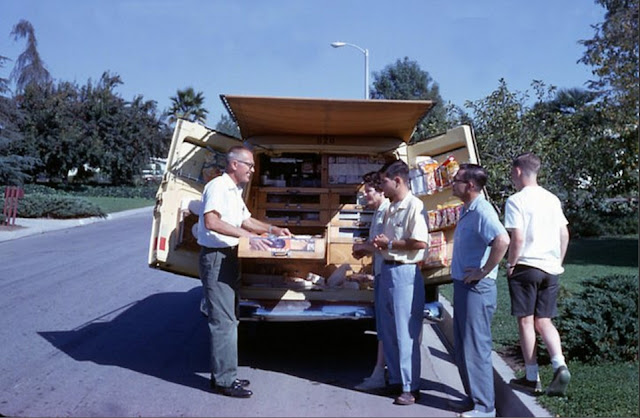 http://flickriver.com/photos/g_cliser/popular-interesting/
When you look at these photos go to the top of the page and type in the name of any city and there will be amazing photos... I typed Pasadena California, New York, Chicago, Atlanta, Los Angeles, and a few others. Fun!!! I found this photo of the Dunbar Castle remains in Scotland (Dunbar my mother's mother's family name) 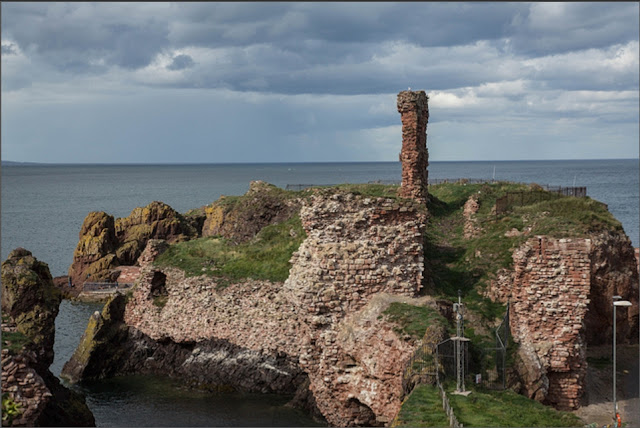 and I even typed in Los Angeles Sheriff and there are many photos of many many different LASD radio cars/vehicles/choppers... 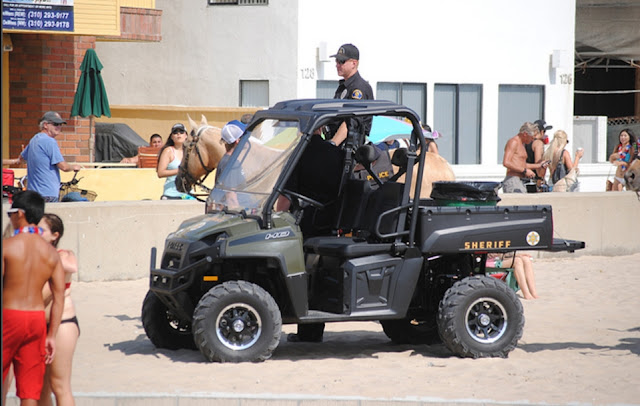 And Catalina Island has lots of current photos as well as old ones... 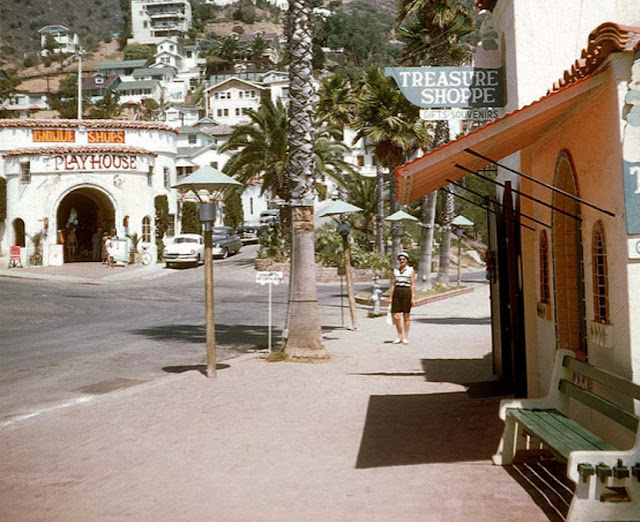 This ranch dip is fully loaded! Yogurt and cream cheese make this dip extra-creamy, while all of the mix-ins and toppings add a whole lot of flavor. Loaded Ranch Dip is great for a summer barbecue or a backyard get-together, especially since it makes enough to feed a crowd! 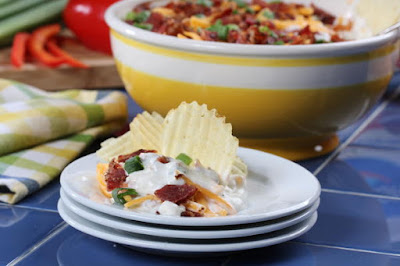 Historically this date....
1945 – World War II: Führerbunker: After learning that Soviet forces have taken Eberswalde without a fight, Adolf Hitler admits defeat in his underground bunker and states that suicide is his only recourse.
.......too bad he wasn't caught and put in an oven to die! JUSTICE.
2000 – In a pre-dawn raid, federal agents seize six-year-old Elián González from his relatives' home in Miami, Florida.
Commentators have suggested that the Elián González affair may have been a factor in voters' decisions in the 2000 United States presidential election, which could have affected the close outcome in Florida. Al Gore's handling of the matter may have been as great a factor as anger by the predominantly Republican Cuban community over the boy's return to Cuba. Gore initially supported Republican legislation to give the boy and his father permanent residence status, but later supported the Administration position. He was attacked by both for pandering and being inconsistent.
2008 – The United States Air Force retires the remaining F-117 Nighthawk aircraft in service.
And births this date include....
1906 – Eddie Albert, American actor (d. 2005)

Later dinner, chair, wine, and TV. Bruiser climbed up on my lap and was intent on watching something outside.... 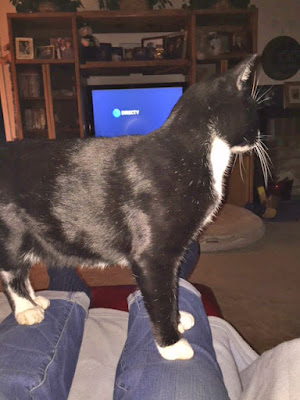 Then he put his head down and napped! 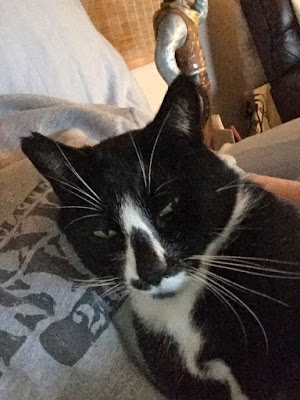 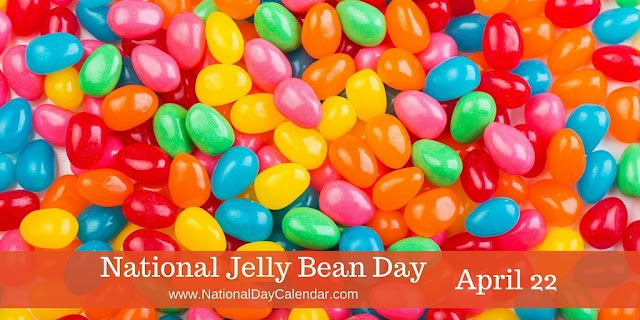 While candies made in a similar manner existed before the jelly bean, Boston confectioner William Schrafft made them popular during the Civil War.  With their firm exterior, jelly beans were the first candies to be sold by the pound. Schrafft encouraged his customers to send them to Union soldiers.
During the 1930s, jelly beans became closely associated with the Easter holiday but are now enjoyed year round.  Jelly Beans were Ronald Reagan’s favorite treat.
** In my kitchen I kept a jar with Jelly Bellies in it. When I babysat our little Alex she would always ask for some. She loved them. That is what I nicknamed her, Jelly Bean,  hence the email JellyBeansBobo!  "Bobo" because she couldn't say "grandma", she called me Bobo.
She texted me yesterday and I told her what day today was so she was going to wear the shirt I sent her... 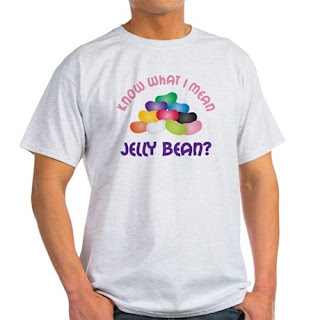 Posted by Oregon Sue at 7:39 AM No comments: