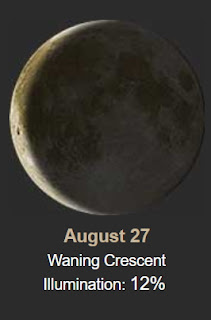 Good 54º clear sky morning.
Yesterday stayed clear and warm and we heated to 103º.

Picture of the Day ... another super odd mailbox! 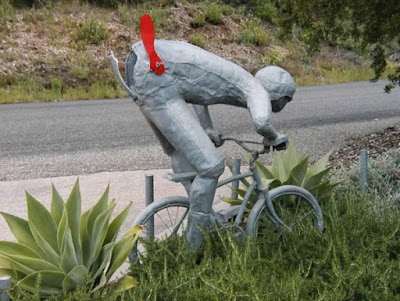 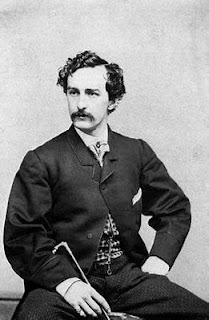 Despite his success as an actor on the national stage, John Wilkes Booth will forever be known as the man who assassinated President Abraham Lincoln. Booth, a native of Maryland, was a fierce Confederate sympathizer during the Civil War. Before the fateful night at Ford’s Theater, he had conspired to kidnap Lincoln and hide him until all Confederate prisoners were released.
The celebrated actor Junius Brutus Booth immigrated to the United States from England in the early 1820s and settled his family in Harford County, Maryland, where the ninth of his 10 children, John Wilkes, was born on May 10, 1838. In 1846, it was revealed that Junius Booth had neglected to divorce his first wife before eloping with his second, Mary Ann, 25 years before. The scandal made an impression on young John Wilkes, who was fiercely proud of his illustrious family name.
After his father’s death in 1852, Booth left his studies at the prestigious military school St. Timothy’s Hall. In 1855, he followed his older brothers, Junius Jr. and Edwin, into the acting profession, making his debut in Shakespeare’s Richard III at the Charles Street Theater in Baltimore. Booth worked for a year at a Philadelphia theater before moving to the Marshall Theater in Richmond, Virginia, where he became known for his dark good looks, his intensely physical, almost acrobatic, performances and his popularity with women.
In October 1859, Booth–who, like many Marylanders, supported slavery–was shocked and galvanized by the abolitionist John Brown’s bloody raid on Harper’s Ferry, Virginia. Booth briefly enlisted in the Richmond militia and witnessed Brown's hanging in December.
Shortly after the outbreak of the Civil War, Lincoln declared martial law in Maryland as part of an effort to keep the state from seceding. Angry and frustrated, Booth nonetheless promised his mother he would never enlist in the Confederate Army. He continued his acting career, drawing crowds and impressing critics from St. Louis to Boston. In November 1863, he performed in The Marble Heart at Washington's Ford's Theater. In the audience were President and Mrs. Lincoln.
Less than a week later, Confederate forces evacuated Richmond, and within two weeks, General Robert E. Lee surrendered his troops. As Washington exploded in celebration, Booth attended another Lincoln speech on April 11, reacting strongly to Lincoln’s suggestion that he would pursue voting rights for blacks. Booth angrily told his co-conspirator, Davy Herold: “Now, by God, I’ll put him through.” Three days later at Ford's Theater, John Wilkes Booth made good on his word.
John Wilkes Booth assassinated President Lincoln on April 14, 1865 before being killed himself. Four years later, President Andrew Johnson returned Booth’s body to his family. Today, John Wilkes Booth is buried in an unmarked grave in the Booth family plot at Green Mount Cemetery in Baltimore, Maryland. However, that has not stopped people from determining its location — and leaving a little something behind. In lieu of flowers or stones, people leave pennies behind on the headstone as revenge for Abraham Lincoln, whose face is on the penny. 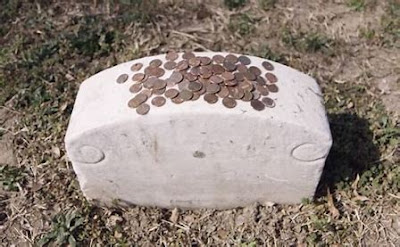 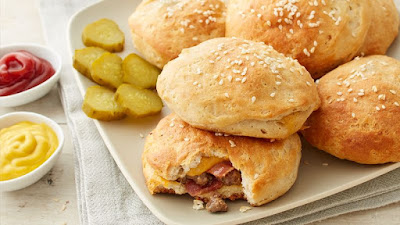 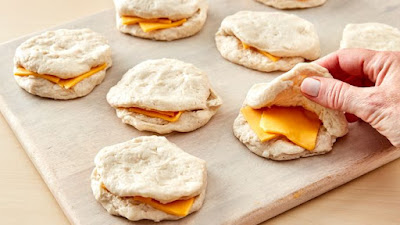 Holding opened biscuit in hand, place 1/4 cup of beef mixture inside. Gently stretch dough over filling, pressing and firmly sealing around edges of biscuit. Reshape into round and place on cooking sheet. Repeat for remaining biscuits. Brush with melted butter and top each with sprinkled sesame seeds. 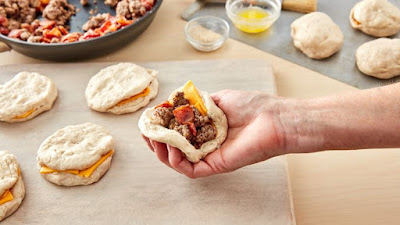 Bake 18-22 minutes or until biscuit tops are golden brown and inside mixture is heated through. Serve with your favorite fixin's.

Historically this date....
1859 – Petroleum is discovered in Titusville, Pennsylvania leading to the world's first commercially successful oil well.
1918 – Mexican Revolution: Battle of Ambos Nogales: U.S. Army forces skirmish against Mexican Carrancistas in the only battle of World War I fought on American soil.
1939 – First flight of the turbojet-powered Heinkel He 178, the world's first jet aircraft.
1980 – A massive bomb planted by extortionist John Birges explodes at Harvey's Resort Hotel in Stateline, Nevada after a failed disarming attempt by the FBI. Although the hotel is damaged, no one is injured.
2003 – Mars makes its closest approach to Earth in nearly 60,000 years, passing 34,646,418 miles (55,758,005 km) distant.
2011 – Hurricane Irene strikes the United States east coast, killing 47 and causing an estimated $15.6 billion in damage. 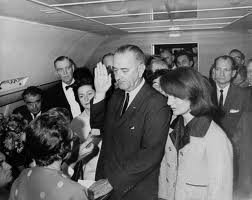 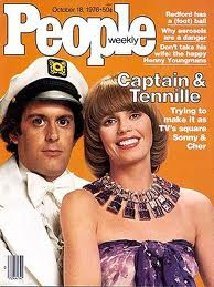 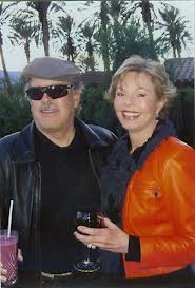 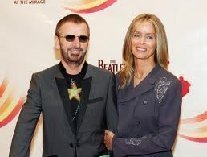 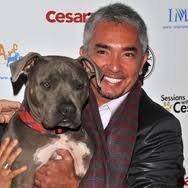 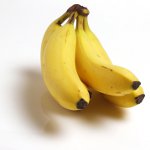 Bananas are edible fruit produced by several kind of plants in the genus Musa. Contrary to a common misconception, bananas are not trees but large herbaceous plants. Bananas are rich in dietary fiber and sugars. They are an excellent source of vitamin B6. They also contain other B vitamins, vitamin C, potassium, magnesium, phosphorus, sodium, zinc, iron, and manganese.
Bananas are extensively used in cooking. There are two main types of bananas. Dessert bananas, often referred to as simply bananas, can be eaten raw. They are either consumed by themselves or used for making pastry and desserts. Plantains, or cooking plantains, are consumed only after cooking. They can be fried, grilled, baked, boiled, and steamed.
There are a lot of dishes that include bananas as one of the primary ingredients. Some of them are: banana bread, banana pudding, banana split, banana cream pie, banana muffins, Bananas Foster, plantain soup. Banana chips are a popular snack food.
To celebrate the National Banana Lovers Day, cook any of these dishes. If you don't feel like cooking, just eat a couple of bananas which are both tasty and useful.