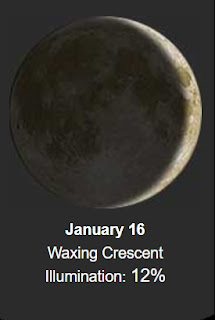 Good 46º cloudy morning.
Yesterday started off a tad foggy and then a little rain... 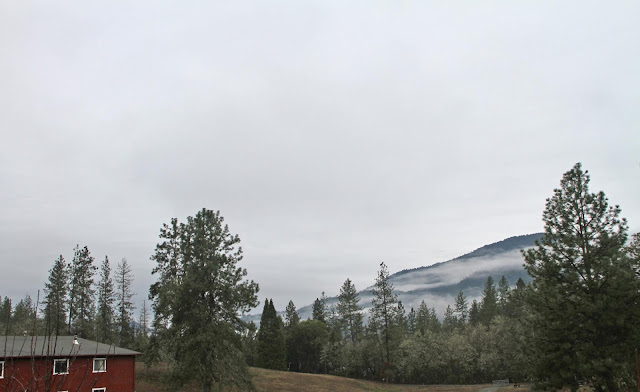 And the two geese were up on my barn roof again... honking.... 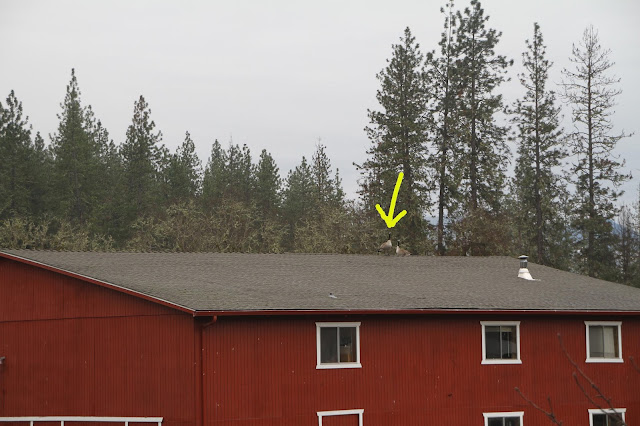 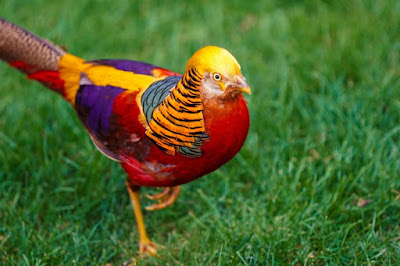 The Golden Pheasant, (Chrysolophus pictus), also known as the ‘Chinese Pheasant’ is one of the more popular species of pheasant which is native to the mountainous forests of Western and Central China.
Interesting about MGM 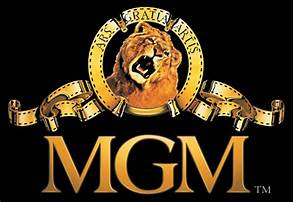 Metro-Goldwyn-Mayer Studios Inc. (initialized as MGM) is an American media company, involved primarily in the production and distribution of feature films and television programs. One of the world's oldest film studios, MGM's corporate headquarters are located at 245 North Beverly Drive in Beverly Hills, California.

The studio's official motto, "Ars Gratia Artis", is a Latin phrase meaning "Art for art's sake". It was chosen by Howard Dietz, the studio's chief publicist. The studio's logo is a roaring lion surrounded by a ring of film inscribed with the studio's motto. The logo, which features Leo the Lion, was created by Dietz in 1916 for Goldwyn Pictures and updated in 1924 for MGM's use. Dietz based the logo on his alma mater's mascot, the Columbia University lion. Originally silent, the sound of Leo the Lion's roar was added to films for the first time in August 1928. In the 1930s and 1940s, the studio billed itself as having "more stars than there are in heaven", a reference to a large number of A-list movie stars under contract to the company. This second motto was also coined by Dietz and was first used in 1932.

I posted this before...yummy and easy!
from Mr. Food... 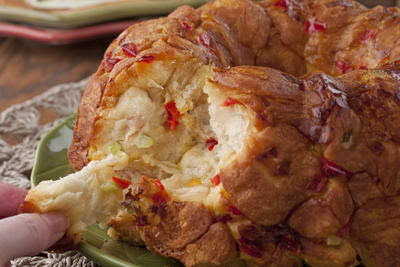 "We've taken canned biscuits and laced them with bits of chopped veggies and shredded cheese for a pull-apart bread that's almost a meal in itself."
Historically this date....
1847 – John C. Fremont is appointed Governor of the new California Territory.
1942 – Crash of TWA Flight 3, killing all 22 aboard, including film star Carole Lombard.
1945 – Adolf Hitler moves into his underground bunker, the so-called Führerbunker.
1979 – The Shah of Iran flees Iran with his family and relocates to Egypt.
along with him, his Police Commander, who is the grandfather of Brian's pal Kio. Kio has a wonderful family, most of whom I have met, including his grandfather. Interesting man. Sadly Kio passed away last November from brain cancer. He was only 50.
1991 – The United States goes to war with Iraq, beginning the Gulf War (U.S. Time).
2003 – The Space Shuttle Columbia takes off for mission STS-107 which would be its final one. Columbia disintegrated 16 days later on re-entry.
And births this date include.....
1634 – Dorthe Engelbrechtsdatter, Norwegian poet (d. 1716)
Glad I didn't have to learn how to spell that as a kid!
1878 – Harry Carey, American silent film actor (d. 1947)

All I know. Nuff said. Hope you have a good Saturday. Ciao.
xo Sue Mom Bobo 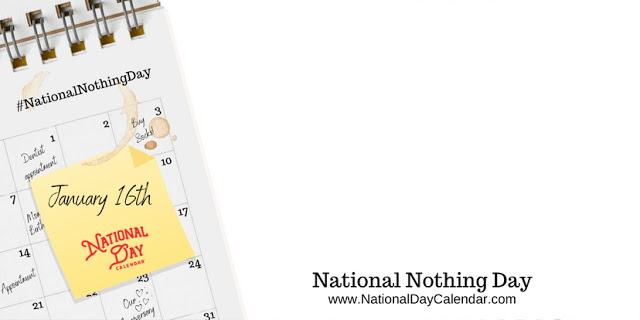 Each year on January 16th, people across the nation recognize National Nothing Day.
The observance was created as a day to provide Americans with one National Day when they can just sit without celebrating, observing or honoring anything.  (National Day Calendar only reports the Days, sometimes they may contradict themselves.)
Martin Luther King Jr. Day falls on the third Monday of January which means that one-in-seven January 16th’s will fall on the same day as Nothing Day, effectively usurping the nature of Nothing Day.
While it may be a good day to celebrate nothing at all, we suppose putting nothing in a glass and setting it on a table might suffice for celebration. You might leave your diary page blank on every January 16th. Don’t mark anything on the calendar on the 16th, either. It would be interesting to see what would happen if you sent a blank email dated January 16th. How many replies would you get saying, “There’s nothing here.”
For people whose birthday lands on January 16th, wrap an empty box. That should elicit and a nothing response appropriate for the celebration.
When asked, “What are your plans, today?” your response should definitely be, “Nothing.” What else would your answer be on a day like today? Now that we think about it, “Nothing” works well as an answer when recognizing the day.
Q: What’s for supper?
A: Nothing
Q: What are you reading?
A. Nothing. (Even though you’re clearly reading something.)
Q. What’s your homework assignment?
A. Nothing. (As you’re working on your homework.)
Q. What are you drinking.
A. Nothing. (As you sip on the best non-fat latte ever.)

In 1972, columnist Harold Pullman Coffin proposed National Nothing Day. The day has been observed in all its nothingness since 1973.  The observance is sponsored by Coffin’s National Nothing Foundation, registered in Capitola, California.
Posted by Oregon Sue at 7:34 AM No comments: