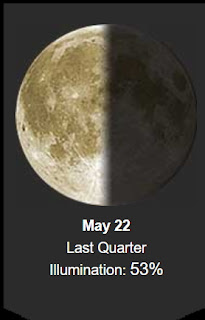 Good 40º clear sunny morning. We topped at 82º yesterday.
Yesterday morning early Dave Bourisaw showed up with his tractor and brush hog to cut down all the grass in my pastures. 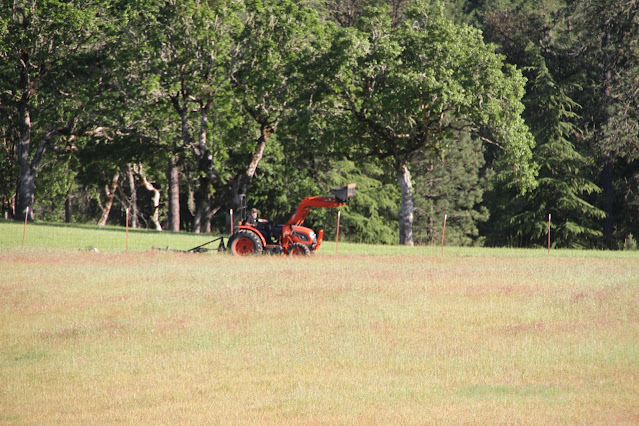 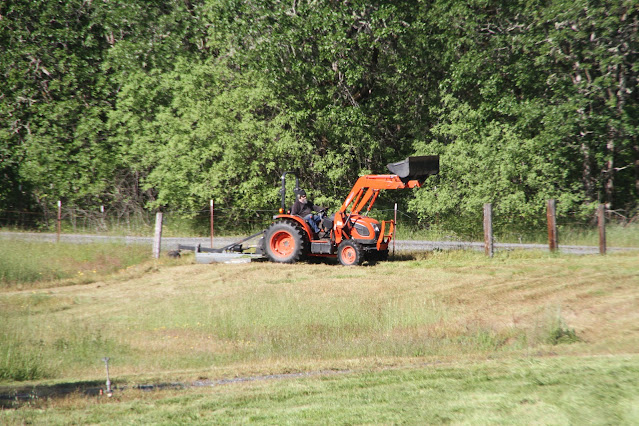 He will be back today to finish.
Picture of the Day
...I'm keeping and eye on the ladybug! 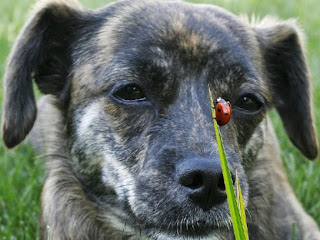 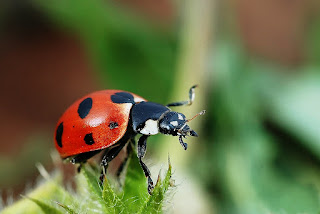 The name coccinellids is derived from the Latin word coccineus meaning "scarlet". The name ladybird originated in Britain where the insects became known as "Our Lady's bird" or the Lady beetle. Mary (Our Lady) was often depicted wearing a red cloak in early paintings, and the spots of the seven-spot ladybird (the most common in Europe) were said to symbolise her seven joys and seven sorrows. In the United States, the name was adapted to ladybug. Common names in some other European languages share associations; for example, the German name Marienkäfer translates to Marybeetle. 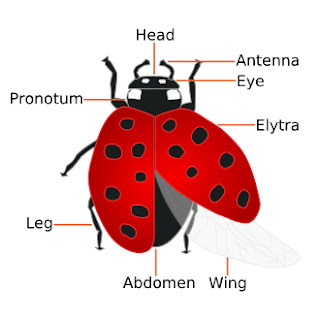 Coccinellids are often conspicuously coloured yellow, orange, or red with small black spots on their wing covers, with black legs, heads and antennae. There is, however, great variation in these colour patterns. For example, a minority of species, such as Vibidia duodecimguttata, a twelve-spotted species, have whitish spots on a brown background. Coccinellids are found worldwide, with over 6,000 species described.

Most coccinellids have round to elliptical, dome-shaped bodies with six short legs. Depending on the species, they can have spots, stripes, or no markings at all. Seven-spotted coccinellids are red or orange with three spots on each side and one in the middle; they have a black head with white patches on each side.

As well as the usual yellow and deep red colourings, many coccinellid species are mostly, or entirely, black, dark grey, gray, or brown.

The main predators of coccinellids are usually birds, but they are also the prey of frogs, wasps, spiders, and dragonflies. The bright colours of many coccinellids discourage some potential predators from making a meal of them. This phenomenon, called aposematism, works because predators learn by experience to associate certain prey phenotypes with a bad taste. A further defence, known as "reflex bleeding", exists in which an alkaloid toxin is exuded through the joints of the exoskeleton, triggered by mechanical stimulation (such as by predator attack) in both larval and adult beetles, deterring feeding. 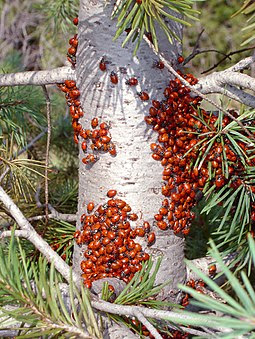 In North America, coccinellids usually begin to appear indoors in the autumn when they leave their summer feeding sites in fields, forests, and yards and search out places to spend the winter. Typically, when temperatures warm to the mid-60s °F in the late afternoon, following a period of cooler weather, they will swarm onto or into buildings illuminated by the sun. Swarms of coccinellids fly to buildings in September through November depending on location and weather conditions. Homes or other buildings near fields or woods are particularly prone to infestation.
From Mr. Food 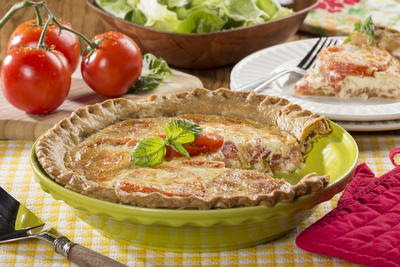 This summer, how about using those ruby red tomatoes to bake up something a little unusual but a whole lot tasty? We call it Summer's Best Tomato Pie and it's so fresh and creamy, you're gonna have a hard time stopping at one slice. With tomatoes being such a great summer food buy, you may want to bake one for a friend, too!


1915 – Lassen Peak erupts with a powerful force, and is the only mountain other than Mount St. Helens to erupt in the contiguous US during the 20th century.


1960 – An earthquake measuring 9.5 on the moment magnitude scale, now known as the Great Chilean Earthquake, hits southern Chile. It is the most powerful earthquake ever recorded.


1968 – The nuclear-powered submarine the USS Scorpion sinks with 99 men aboard 400 miles southwest of the Azores.


2004 – The U.S. town of Hallam, Nebraska, is wiped out by a powerful F4 tornado(part of the May 2004 tornado outbreak sequence) that broke a width record at an astounding 2.5 miles (4.0 km) wide, which kills one resident. 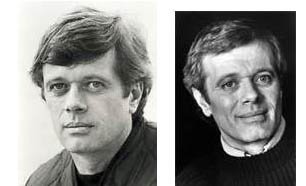 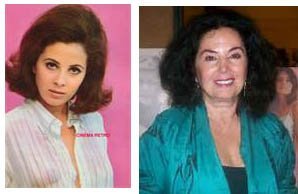 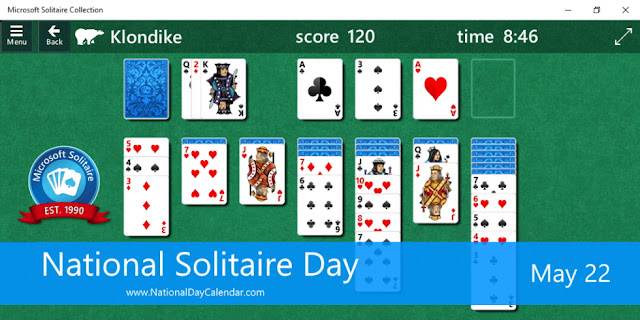 On May 22, National Solitaire Day recognizes a card game that has been around for more than 200 years.

Also known as Klondike, the classic version of the game uses a standard deck of 52 playing cards. The object of the game is to clear the board by creating a stack of cards from low to high in each suit. If the player completes each suit, the player wins the game of Solitaire.

It wasn’t until 1990 when Microsoft included Solitaire in Windows 3.0 that the game truly went viral. Microsoft Solitaire successfully helped teach computer users how to use a mouse and, in the process, ended up becoming one of the most played video games in history.

“…For the past 30 years, Microsoft Solitaire has been providing great entertainment to hundreds of millions of players in every corner of the world, and we’re happy to announce that May 22 of each calendar year will officially be designated as National Solitaire Day, recognizing the day Microsoft first included Solitaire in Windows,” says Paul Jensen, Studio Manager for Microsoft Casual Games.

In 2012, Microsoft evolved Solitaire into the Microsoft Solitaire Collection. These changes feature five of the top Solitaire games in one app. Since then, the game has been played by over 242 million people.

There’s no need to be particularly productive to celebrate the day – just play some Solitaire! Either on a computer, laptop, tablet, phone, or “go retro” and play using real cards. May 22nd, 2020 marked the 30th Anniversary of Microsoft Solitaire. With a worldwide appeal, Microsoft Solitaire Collection hosts tens of millions of players per month, from over 200 countries, in 65 different languages. Even after 30 years, Microsoft Solitaire remains among the most played games on the planet. Within this vast and diverse audience, players complete over 100 Million hands of Solitaire every day! Inducted into the Video Game Hall of Fame in 2019, it is incredible to see what has transpired from a simple game that came with the Windows 3.0 operating system. 30 years later, Microsoft is excited to celebrate this major milestone with fans across the globe.

In 2018, the Registrar at National Day Calendar proclaimed the day to be observed on May 22nd, annually. 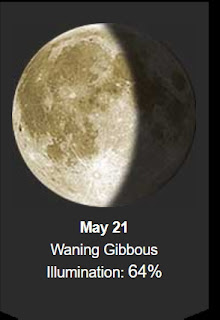 Good 34º clear sky morning.
Yesterday we started with clear sky.... and it has stayed. We topped at 75º. 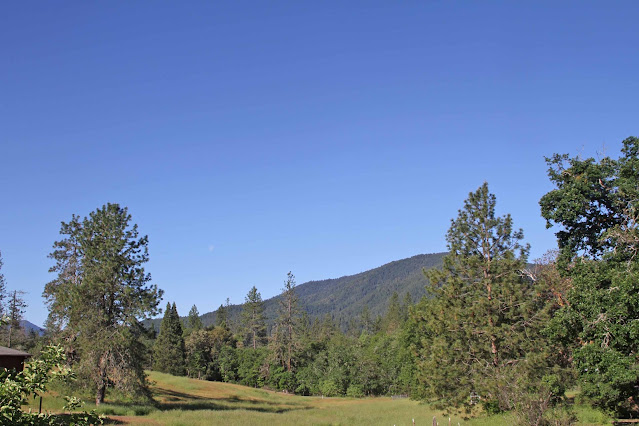 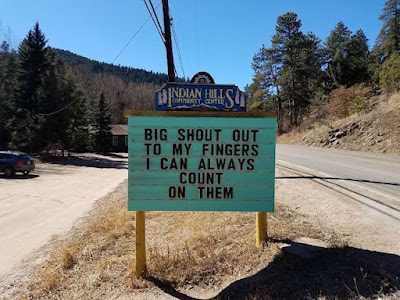 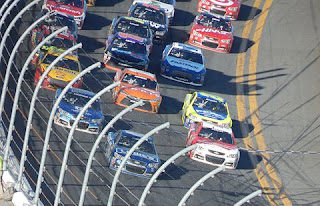 Auto racing (also known as car racing, motor racing, or automobile racing) is a motorsport involving the racing of automobiles for competition.

Auto racing has existed since the invention of the automobile. Races of various sorts were organised, with the first recorded as early as 1867. Many of the earliest events were effectively reliability trials, aimed at proving these new machines were a practical mode of transport, but soon became an important way for automobile makers to demonstrate their machines. By the 1930s, specialist racing cars had developed.

There are now numerous different categories, each with different rules and regulations.

The first prearranged match race of two self-powered road vehicles over a prescribed route occurred at 4:30 A.M. on August 30, 1867, between Ashton-under-Lyne and Old Trafford, a distance of eight miles. It was won by the carriage of Isaac Watt Boulton. 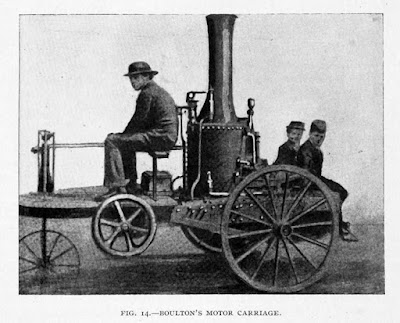 Internal combustion auto racing events began soon after the construction of the first successful gasoline-fueled automobiles. The first organized contest was on April 28, 1887, by the chief editor of Paris publication Le Vélocipède, Monsieur Fossier. It ran 1.2 miles from Neuilly Bridge to the Bois de Boulogne.

On July 22, 1894, the Parisian magazine Le Petit Journal organized what is considered to be the world's first motoring competition, from Paris to Rouen. One hundred and two competitors paid a 10-franc entrance fee.

The first American automobile race is generally held to be the Thanksgiving Day Chicago Times-Herald race of November 28, 1895. Press coverage of the event first aroused significant American interest in the automobile. 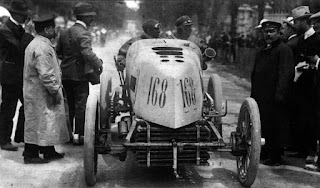 The Targa Florio was an open road endurance automobile race held in the mountains of Sicily near the island's capital of Palermo. Founded in 1906, it was the oldest sports car racing event, part of the World Sportscar Championship between 1955 and 1973.

With auto construction and racing dominated by France, the French automobile club ACF staged a number of major international races, usually from or to Paris, connecting with another major city, in France or elsewhere in Europe.

The two most popular varieties of open-wheel road racing are Formula One and the IndyCar Series. F1 is a worldwide series that runs only street circuit and race tracks. These cars are heavily based around technology and their aerodynamics. The speed record was set in 2005 by Juan Pablo Montoya hitting 232 mph. Some of the most prominent races are the Monaco Grand Prix, the Italian Grand Prix, and the British Grand Prix. The season ends with the crowning of the World Championship for drivers and constructors.

If you want to read a whole lot more, go here: 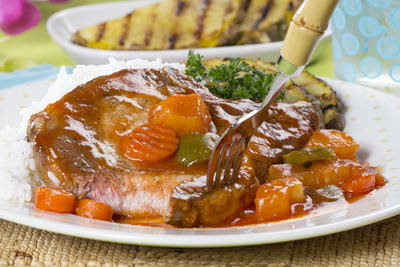 If you want tender, succulent pork drenched in yummy tropical flavor, then you'll love our South Pacific Pork Chops. The sauce on these easy pork chops is so good, you'll want to serve this over some white rice to soak it all up!

****Serve this up with some cooked white rice. 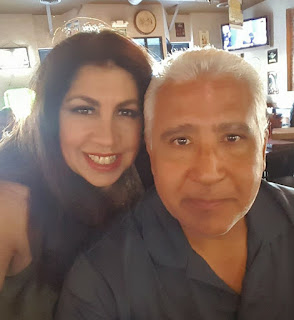 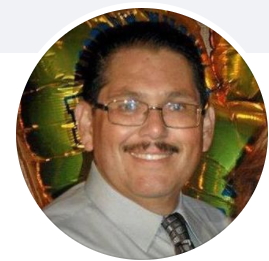 
1932 – Bad weather forces Amelia Earhart to land in a pasture in Derry, Northern Ireland, and she thereby becomes the first woman to fly solo across the Atlantic Ocean.


1976 – The Yuba City bus disaster occurs in Martinez, California. 29 are killed making it the deadliest road accident in U.S. history. 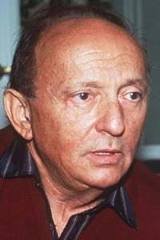 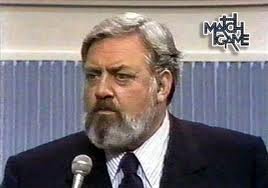 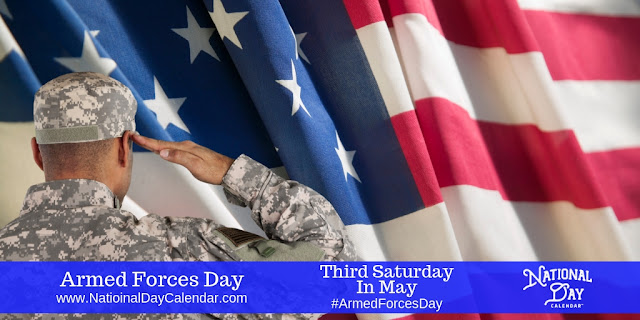 Armed Forces Day on the third Saturday in May pays tribute to the military personnel serving in the United States Armed Forces. The celebration takes place each year during Armed Forces Week.

HOW TO OBSERVE Armed Forces Day

Volunteer for a veteran organization that supports those who are deployed. Organize care packages for service members or their families. Recognize a service member, you know. Learn more about the history of each branch of the military and how it has evolved. Discover more about your family’s military history, too. Most importantly, show support for those currently serving in the Armed Forces. Call them. Write to them. Send them a message and let them know you support them and respect the choices they’ve made to serve.

It was with the idea for citizens to come together and thank our military members for their patriotic service in support of our country that President Harry S. Truman led the effort to establish this single holiday. The one-day celebration then stemmed from the unification of the Armed Forces under the Department of Defense. On August 31, 1949, Secretary of Defense Louis Johnson announced the creation of an Armed Forces Day to replace separate Army, Navy, Marine Corps, U.S. Coast Guard, and Air Force Days.

The first observance on May 20, 1950, launched with parades, open houses, receptions, and air shows.