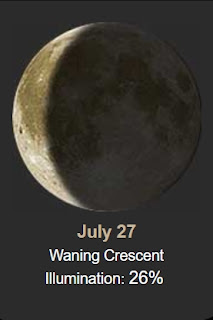 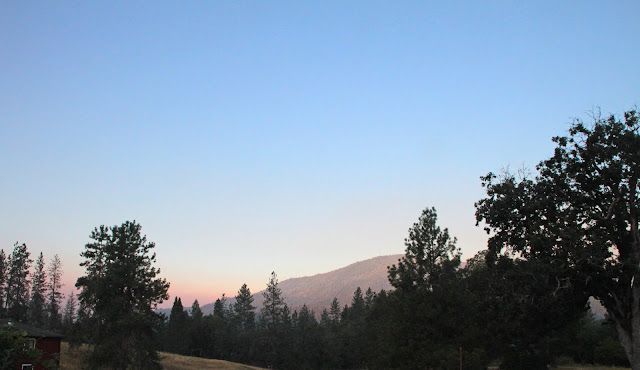 The wildfire in Canyonville was about 800 acres, then overnight it had grown to over 1,600 acres!! Apparently started by an illegal campfire! On the news last night they said the fire had grown to 6000 acres!!! Surprising is that so much of the smoke here has dissipated.... 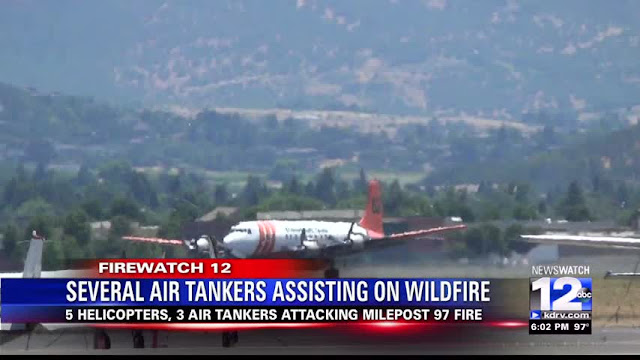 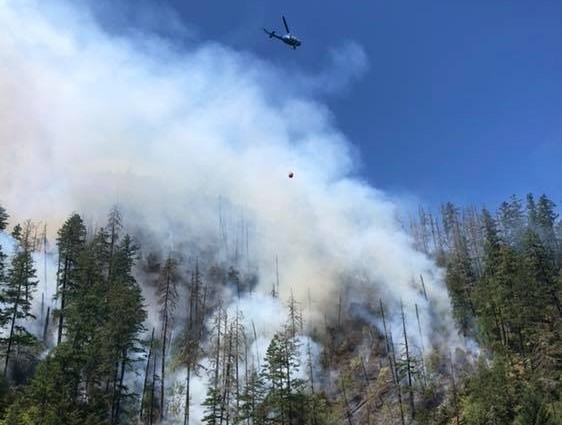 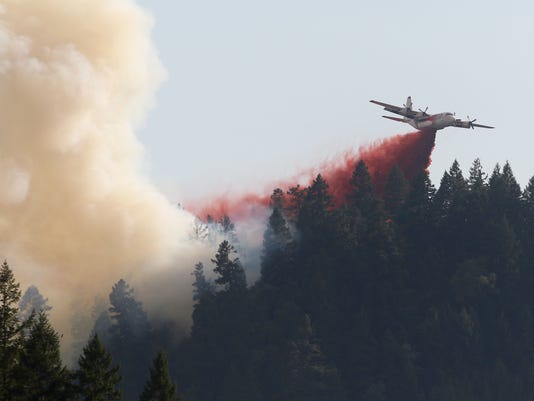 A year ago today were were suffering with the smoke from several wildfires. We topped at 106º.
The smoke yesterday... can't see my mountain... 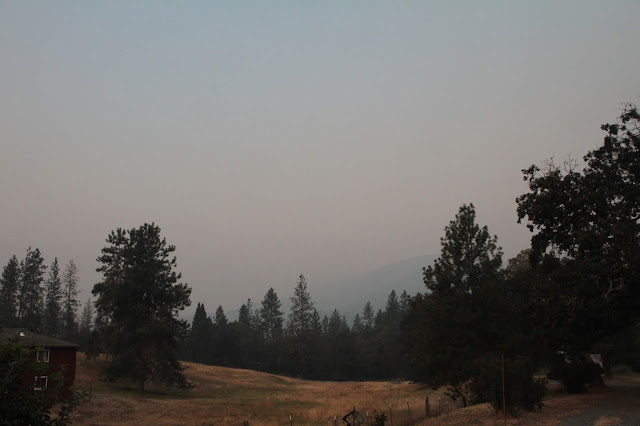 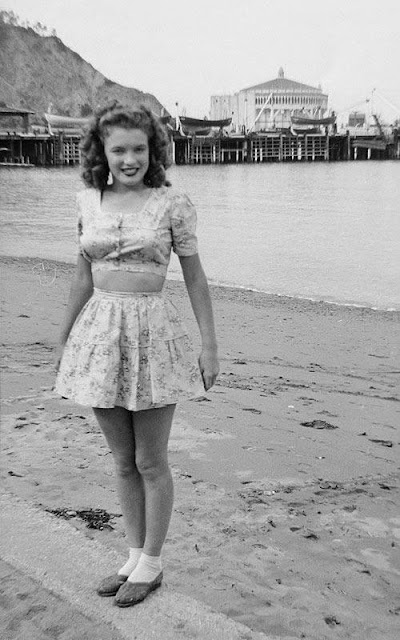 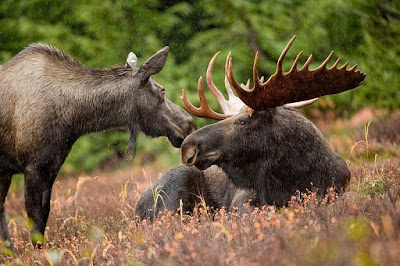 Moose are the largest of all the deer species. Males are immediately recognizable by their huge antlers, which can spread 6 feet from end to end. Moose have long faces and muzzles that dangle over their chins. A flap of skin known as a bell sways beneath each moose's throat. These animals live in the northern United States, Canada and Europe, in areas that have seasonal snow cover. The animals prefer colder climates. They cannot tolerate temperatures above 80 degrees Fahrenheit for long because they cannot sweat, and the fermentation caused by their digestion creates a large amount of heat.
Moose are considered the least social animals. The moose's most active times are at sunrise and at sunset. They tend to graze on the leaves, bark, pine cones, twigs and buds of trees and shrubs. They also like to eat aquatic plants like water lilies. Moose have four-chambered stomachs, as do cows. Food is fermented in the first chamber, and nutrients are extracted in the next three.
Females give birth to one baby, which is called a calf. Around 50 percent of calves die due to bear or wolf attacks before they are 6 weeks old. 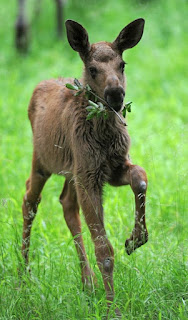 After the mating season males drop their antlers to conserve energy for the winter. A new set of antlers will then regrow in the spring. Antlers take three to five months to fully develop, making them one of the fastest growing animal organs. Antler growth is "nourished by an extensive system of blood vessels in the skin covering, which contains numerous hair follicles that give it a 'velvet' texture." This requires intense grazing on a highly-nutritious diet. By September the velvet is removed by rubbing and thrashing which changes the color of the antlers. Immature bulls may not shed their antlers for the winter, but retain them until the following spring. Birds, carnivores and rodents eat dropped antlers as they are full of protein and moose themselves will eat antler velvet for the nutrients.
On average, an adult moose stands 4.6–6.9 ft high at the shoulder, which is more than a foot higher than the next largest deer on average, the wapiti. Males (or "bulls") normally weigh from 838 to 1,543 lbs and females (or "cows") typically weigh 441 to 1,080 lbs, depending on individual age or nutritional variations
A year ago I posted this recipe....
awesome, Zucchini Corn Bread Pie... 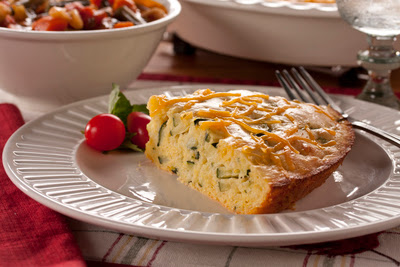 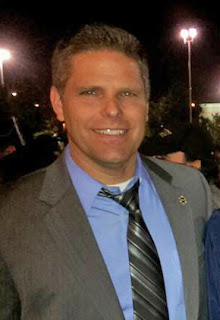 Historically this date....
1789 – The first U.S. federal government agency, the Department of Foreign Affairs, is established (it will be later renamed Department of State).
1940 – The animated short A Wild Hare is released, introducing the character of Bugs Bunny. 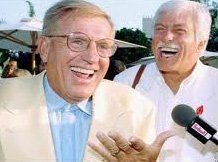 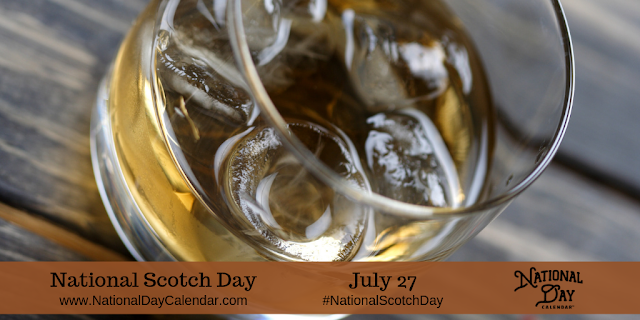 On July 27, we recognize an aged whisky distilled from malted barley. Make a toast on National Scotch Day and share a drink with a friend.
Since Scotch is protected by law, specific guidelines must be followed when making it for it to be labeled as Scotch. Otherwise, it may be an ordinary whisky (or whiskey if it’s made in the United States). First and foremost, Scotch must be made in Scotland. Another requirement includes the grain used in the fermentation process. For Scotch, only malted barley may be used. The Scotch must also be aged in oak barrels for at least three years and have an ABV of less than 94.8%. While most Scotch is made with barley, water, and yeast, other grains can be included, but no fermentation additives, per law.
Scotch whisky dates back to 15th century where a Scottish taxman recorded the spirit in 1494. Since then, Scotch, barley, malt, and grain have been in and out of the shadows. The distilleries or the smugglers either dodged the king’s taxman or organized against him. Scotch was first protected by definition in law in 1933. It was further protected in 1988 with the Scotch Whisky Act.
There are five distinct categories of Scotch whisky including single malt Scotch, single grain Scotch, blended malt Scotch, blended grain Scotch, and blended Scotch.