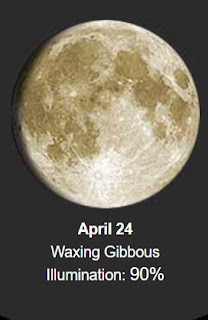 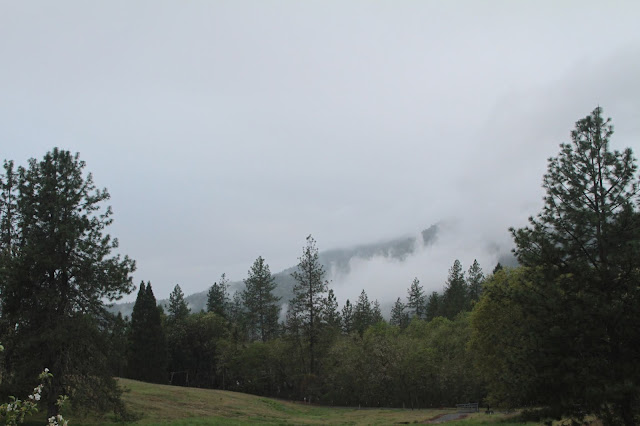 And the geese are sitting on the barn roof.... 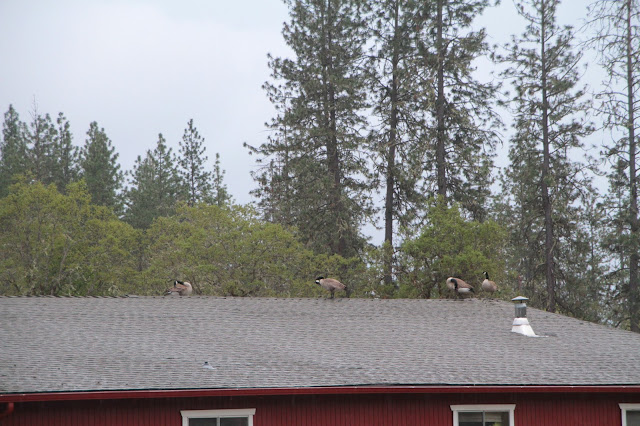 Yesterday we started clear and then the clouds started moving in. We topped at 75º. Predictions were for rain last night.....and the predictions were right!!
Picture of the Day ... half eaten potato? No, it's a rock. 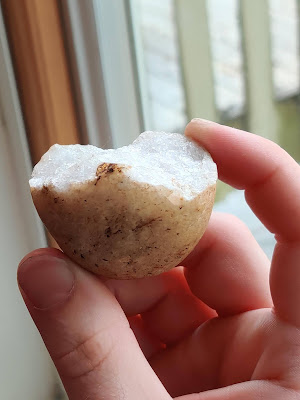 Interesting about the Titanic 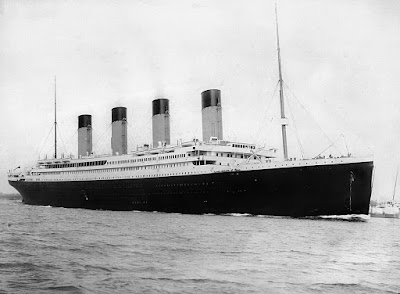 April 15, 1912, is the day the British ocean liner Titanic sank after hitting an iceberg during its maiden voyage from Southampton to New York City.  Here are five surprising facts you may not know about the sinking of the Titanic...

A Full Moon May Have Led to The Iceberg CollisionScientists arrived at a new theory that the full moon on January 4, 1912 could be to blame for the Titanic‘s collision with the iceberg. Quoting astronomer Donald Olson of Texas State University, “That full moon, on January 4, 1912, may have created unusually strong tides that sent a flotilla of icebergs southward—just in time for Titanic‘s maiden voyage.” This wasn’t a normal full moon, though. It was the closest approach of the moon since A.D. 796, and Earth won’t see its like again until 2257.
The Sinking of the Titanic Was Predicted in More Than One BookAt least four fictional books had eerily similar tales of liners that met the same fate as the Titanic. That might not sound so weird until you realize that all four were written before the ship sank. The first was the 1886 novel The Sinking of a Modern Liner, a British story about a ship that leaves Liverpool for New York, hits something, sinks, and loses most of her passengers because she lacked the correct number of lifeboats. What's even stranger is that the author of this book, W.T. Stead, died on the Titanic. Another book is 1898's Futility, or the Wreck of the Titan, in which a liner named Titan, supposedly unsinkable, hits an ice shelf and sinks. Additional creepy details include sinking off Newfoundland, like the Titanic; not having enough lifeboats; and traveling at similar speeds. A third book was 1908's The Ship's Run. However, there were so many similarities between the Titanic and the ship in the book that there is speculation that the author saw construction plans for the Titanic before writing the story. The fourth book was 1912's The White Ghost of Disaster. This book, released as the Titanic was setting sail, saw a ship crash at a specific speed—the same one that the Titanic traveled at when it hit the iceberg.

Days Passed Before the True Story of the Titanic Became KnownNews that the Titanic struck an iceberg began to spread on April 15. As wire dispatch messages were being relayed to the media, details were hazy. But many publications went full steam ahead with their coverage. One paper proclaimed “All Saved From Titanic After Collision,” while a London Daily Mail headline said “No Lives Lost.” The New York Times was skeptical of the ship’s fate, but published a dispatch that claimed, “All Titanic Passengers Safe; Towing to Halifax.” It was days later before the real story of the massive loss of lives reached the press.
Titanic Memorability Fascinates CollectorsThough it sank more than 100 years ago, Titanic memorabilia is still highly sought after by collectors, who pay big bucks from items that survived the ship’s sinking. In 2015, a first-class lunch menu from the Titanic saved by a passenger fetched $88,000. In 2017, an unsent letter recovered from the body of a passenger and dated April 13, 1912, sold for $166,000 at auction.
Titanic’s Oldest Living Survivor Died in 2009 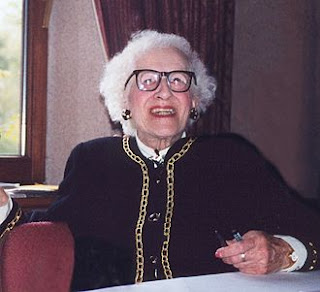 Millvina Dean was a nine-week-old infant traveling with family emigrating to Wichita, Kansas, when the Titanic went down. When the ocean liner sank, she represented the youngest survivor. Dean, along with her mother and brother, survived and returned to Southhampton after their rescue.
More about Millvina here:
https://en.wikipedia.org/wiki/Millvina_Dean
More about the Titanic here:
https://en.wikipedia.org/wiki/Wreck_of_the_Titanic
From Mr. Food 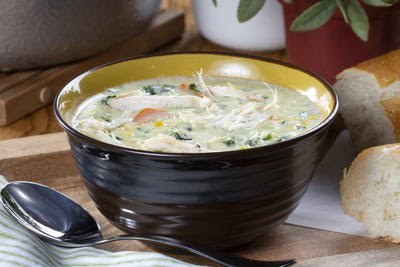 The kids are back in school and there's a slight chill in the air; how about something warm and comforting for dinner? Our Hearty Chicken & Corn Soup is going to warm up your kitchen and the hearts of everyone gathered around the kitchen table. There's nothing better than a creamy soup studded with corn, spinach, potatoes, and tender chicken. This is hearty and comforting at its best.

***This is a great way to use up your leftover rotisserie chicken; turn it into another weeknight meal that's as comforting as it is tasty!

Historically this date.....
1967 – Cosmonaut Vladimir Komarov dies in Soyuz 1 when its parachute fails to open. He is the first human to die during a space mission.
1970 – The first Chinese satellite, Dong Fang Hong I, is launched. (Oh my, that sounds funny!!)


2005 – Snuppy, the world's first cloned dog, is born in South Korea.
And births this date include....
1934 – Shirley MacLaine, American actor and author 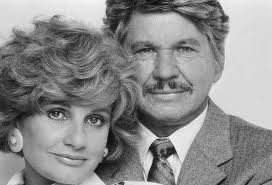 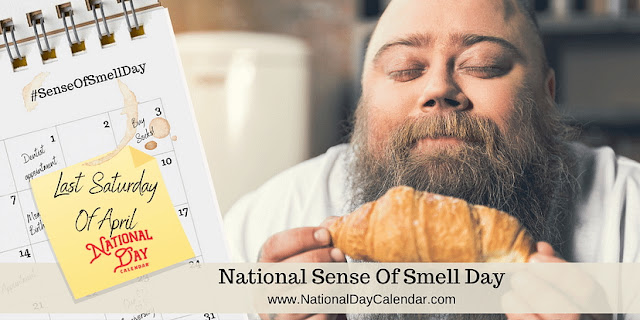 Held on the last Saturday in April, National Sense of Smell Day celebrates one of the five senses. Our sense of smell is more than a way to know when dinner is ready. It also plays a role as an early warning system, triggers memories, and interacts with our other senses.

Did you know, scent cells renew every 30-60 days and are the only sense nerve cells that can regenerate. Those scent cells allow us to recognize smells from childhood, triggering memories of Play-doh, grandma’s cookies or pipe smoke. It’s also the only sense directly connected to the brain where all those memories are stored.

Take a woman when house shopping. She’s more likely to smell unwelcome odors such as smoke, pet urine, or mold before a man. Women naturally have a better sense of smell.

While the loss of smell occurs naturally with age, it can also be a sign of illness, especially a neurological disorder such as Parkinson’s disease or an early stage of Alzheimer’s disease.

A human’s odor is like a fingerprint. Even when we wear deodorant or fragrances, our scent combines with those for a unique combination. Babies recognize the smell of their mothers. Spouses know the scent of their partners, too.

Museums, children’s museums, and science centers across the country participate in celebrating this holiday by offering hands-on activities and informational displays about the sense of smell.

For fun, do a smell test at home. Collect items such as the ones listed below. Place a small amount of each item in individual containers. Cover them with a cloth and then take turns blindfolding family members to see if they can pass the smell test.

Posted by Oregon Sue at 7:09 AM No comments: