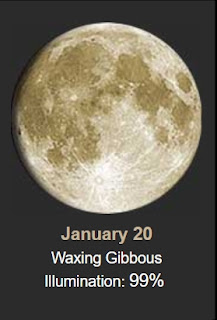 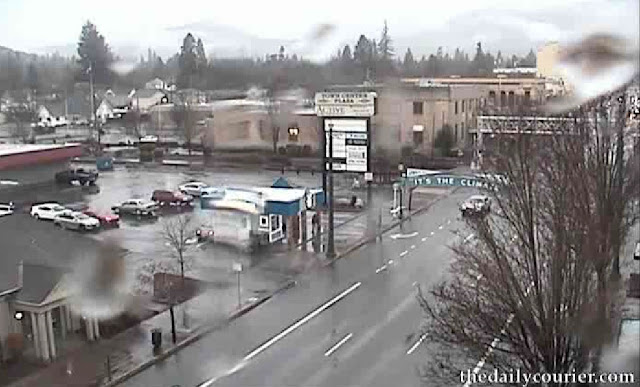 And I got a kick out of this..... a couple walking with an umbrella! Nobody in Oregon uses an umbrella! Must be tourists. :o) 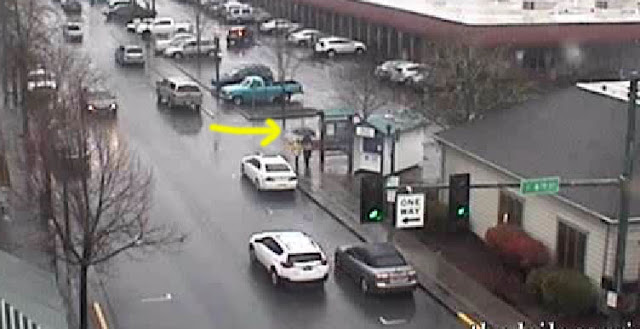 My seasonal creek is filling.... which it hasn't in a couple of years! 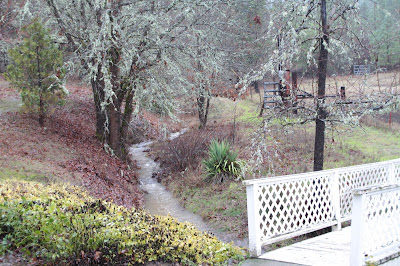 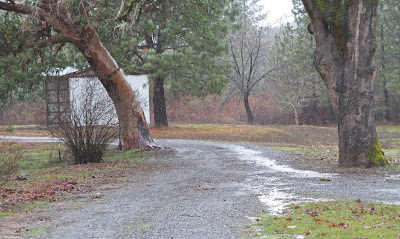 The water is running down my pasture..... 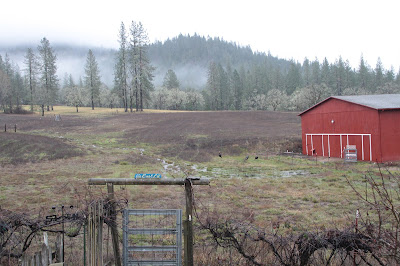 And the turkeys are just standing there in the rain! 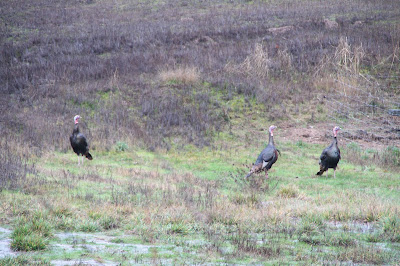 And of course, my mountain is hidden! 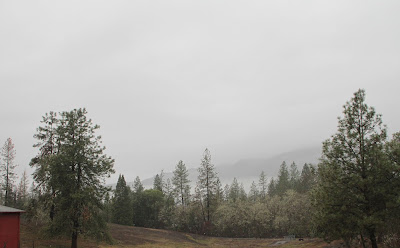 This was the forecast beginning yesterday through tomorrow... 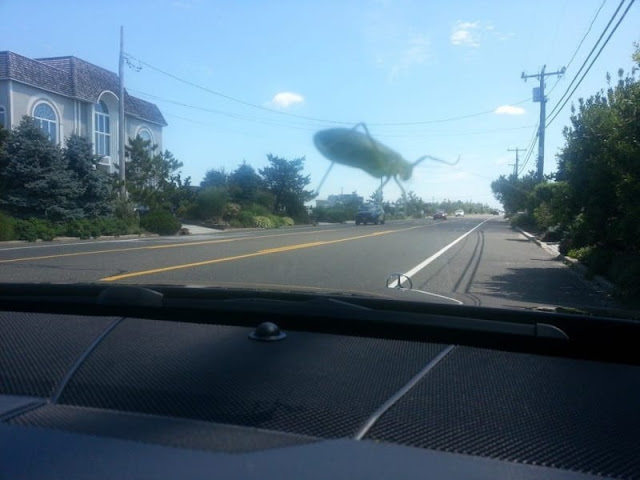 ...lol, a grasshopper on the windshield! 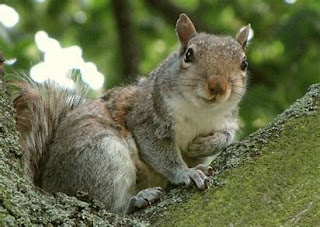 Squirrels are nimble, bushy-tailed rodents found all over the world. They belong to the Sciuridae family, which includes prairie dogs, chipmunks and marmots.

There are more than 200 species of squirrels, according to the Integrated Taxonomic Information System (ITIS), and they are categorized into three types: tree squirrels, ground squirrels and flying squirrels. These three categories are further broken down into many squirrel types, such as Albino, Mountain Tree, Antelope, Spotted, Grey, American Red, Douglas, Fox, Pygmy, Northern Flying, Southern, Arizona Gray, Idaho, Arctic Ground, Albert’s, Franklin, Richardson, Rock, White and Black squirrel.
Since there are so many types of squirrels, they range greatly in size. The smallest squirrel is the African pygmy squirrel. It grows to 2.8 to 5 inches in length and weighs just 0.35 ounces. The Indian giant squirrel is the world's largest known squirrel. It grows to 36 inches  long and weighs up to 4 pounds.
Grey squirrels, commonly found in North America, are medium-size squirrels. They grow to 15 to 20 inches in length, with their tails adding an extra 6 to 9.5 inches to their length. They typically weigh about 1 to 1.5 pounds.

Squirrels have four teeth in the front of their mouth that constantly grow throughout their lives. This ensures that their teeth don't wear down to nubs from gnawing on nuts and other objects.
These rodents have remarkable little bodies. For example, a squirrel has padded feet that cushions jumps from up to 20 feet long. Their eyes are high on their head and placed on each side of the head so they can see a large amount of their surroundings without having to turn their head. They are also fantastic runners. Squirrels can run 20 mph.
A group of squirrels are called a scurry or dray. They are very territorial and will fight to the death to defend their area. Mother squirrels are the most vicious when defending their babies.
Some squirrels are crepuscular. This means that they are only active at dawn and dusk. 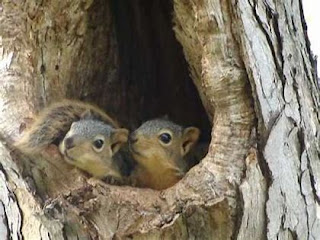 Tree squirrels typically live in wooded areas, since they prefer to live in trees. Ground squirrels live up to their names. They dig burrows, a system of tunnels underground, to live in. Some squirrels also hibernate in burrows during the winter to keep warm.

Albino squirrels are quite popular in some parts of the United States. Olney, Ill., is one of the towns that calls itself "Home of the White Squirrels," along with Marionville, Mo., and Brevard, N.C. The township of Kenton, Tenn., proudly boasts a population of 200 of the furry, pale rodents. 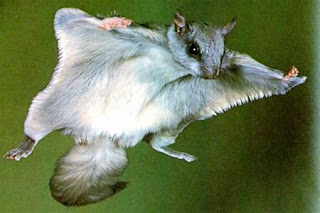 Flying squirrels make their homes in tree holes or nests that are built into the crooks of branches. To get from tree to tree or from a tree to the ground, flying squirrels spread the muscle membrane between their legs and body and glide on the air. They can glide up to 160 feet, making it look like they can fly.
On extra cold days a squirrel likes to spend it in her nest, using her big tail as a warm blanket.
On average, squirrels eat about one pound of food per week. Many people think that squirrels only eat nuts, but this isn't true. Squirrels are omnivores, which means they like to eat plants and meat. Squirrels mainly eat fungi, seeds, nuts and fruits, but they will also munch on eggs, small insects, caterpillars, small animals and even young snakes.
To prepare for cold months, squirrels will bury their food. In the winter months they have a store of food they can eat when supplies are scarce. 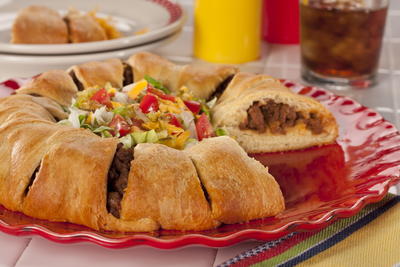 Our Easy Cheeseburger Ring is a family-favorite, ground beef dinner recipe that gets everyone excited! It's simple, tasty, and easy to customize. It even doubles as a great party appetizer, or good for a game day, or a movie night.
** Serve with shredded lettuce, tomatoes, onion, and pickles for that authentic cheeseburger experience!
Special birthday today, my neighbor Maria DeRuyte is celebrating. HAPPY BIRTHDAY MARIA!! 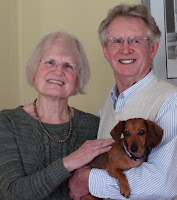 With her hubby, Gerard^
Historically this date....
1885 – L.A. Thompson patents the roller coaster.

2017 – Donald Trump is inaugurated as the 45th President of the United States of America, becoming the oldest person to assume the office.
And births today include.....
1896 – George Burns, American actor, comedian (d. 1996) 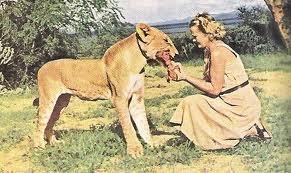 Never could stand her acting or her voice!

Today is a playoff game between my Patriots and the Kansas City Chiefs.


Mostly Cloudy, 21°F at kickoff
· Arrowhead Stadium
Bing Predicts 39% chance NE wins ‧ 61% KC wins
KC leads the NFL in sacks this season and has passed for 656 more yards than NE. But if the Patriots keep protecting QB Brady and bring their impressive defense, they could get the edge.
All I know. Nuff said. Happy Sunday. Ciao.
xo Sue Mom Bobo 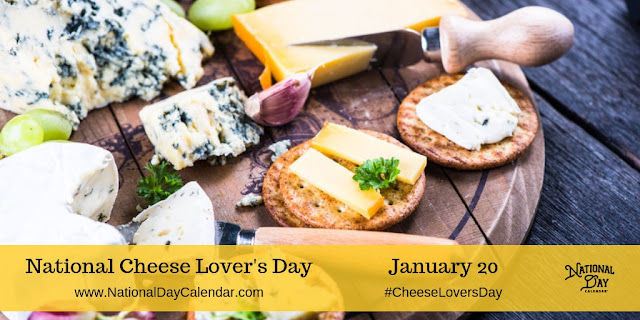 Don’t feel bleu, throw a feta or act capricious. January 20th is a gouda day to kummin over and have some cheddar or asiago or fontina! It’s National Cheese Lover’s Day.
There is no firm evidence how cheese making was discovered, but legend tells us it was likely chance that the first cheese was created. Thousands of years ago, milk was transported and stored in sheep stomachs. Left to sit a few days the proteins would separate into curds and whey.
From there, preserving the solids with salt may have seemed a logical next step. Salt was a highly valued preservative in ancient times.
The earliest record of cheese making dates back to 5,500 BCE in what is now Poland.  Today there are over 1,400 varieties of cheese.
The basic principles behind making cheese are quite simple. Let the milk sour (or scientifically, coagulating the casein protein). Then separate the curds (solids) from the whey (liquid). The curds are then salted and left to age.
Bacteria, enzymes or fungi may be added at various stages. These along with the type of milk, temperature, time and moisture are all controlled to produced the desired taste, color and texture. Herbs and spices may also be added.
The nutritional value of cheese varies depending on the variety. Cottage and mozzarella cheese are at the lower end of fat and calories per serving while mascarpone and cream cheese pack it on. Marscapone makes desserts like tiramisu rich and creamy.
For cheese lovers who think one day is just not enough to celebrate cheese, National Day Calendar has you covered for the entire year. There are 18 other cheese specific holidays on the calendar from National Cheese Doodle Day (March 5) and National Grilled Cheese Sandwich Day (April 12) to Cheese Souffle Day (May 18), National Cheese Day (June 4), National String Cheese Day (September 20) and Moldy Cheese Day (October 9).  Let’s also not forget; cheese makes excellent desserts.  National Cheesecake Day is July 30, and there are three other flavors on the calendar along with National Cream Cheese Brownie Day just around the corner on February 10.
By celebrating National Goat Cheese Month in August, cheese lovers can celebrate 10 out of 12 months of the year.  The last two months of the year do not celebrate cheese specifically but cheese there will be!  National Nacho Day (November 6) just isn’t the same without the queso.  On National Sangria Day (December 20), cheese lovers will enjoy serving a variety of cheeses with all their guests!
Posted by Oregon Sue at 7:48 AM 4 comments: