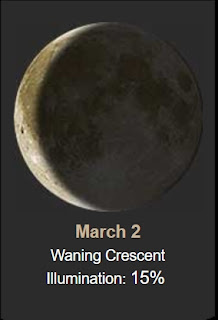 Good 30º frozen foggy ice on the barn roof (along with 2 geese) morning... 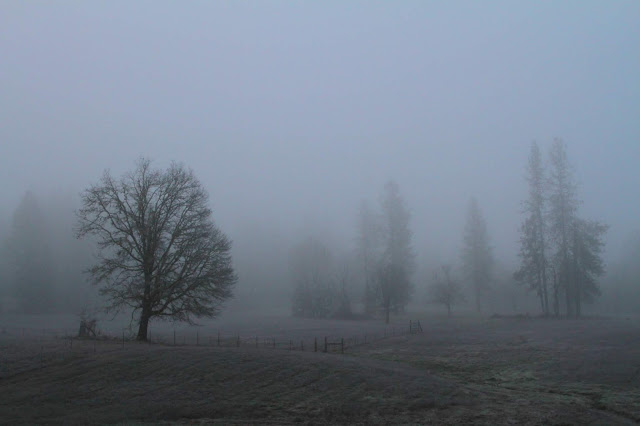 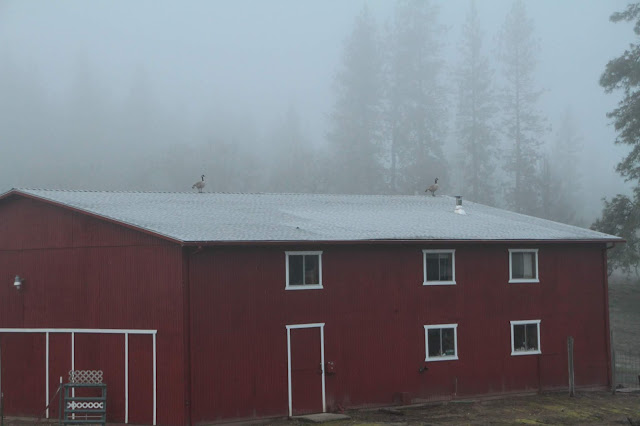 Having been born and raised and lived in Southern California for 50 years, until moving north, I am still weather wise a So. Cal girl. This weather here is COLD!! Yes, I know. Wuss. I wear 2 sweatshirts in the winter and keep hand warmers in my pockets! Now, my friends Pat and Alice live in upper Idaho and yesterday it was 7º!!! YIKES. Icicles on their window sills.... Ok, I'm not complaining about our temps here! 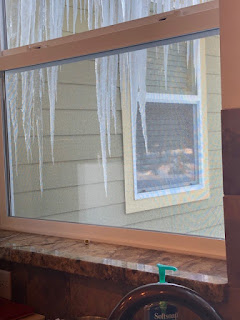 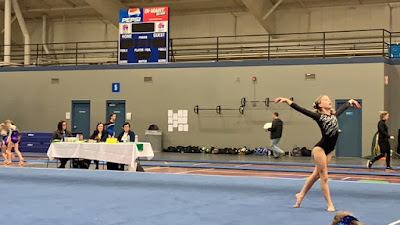 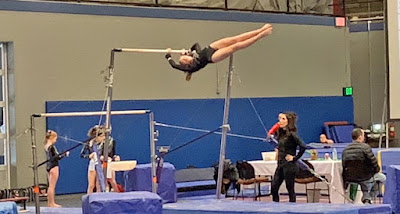 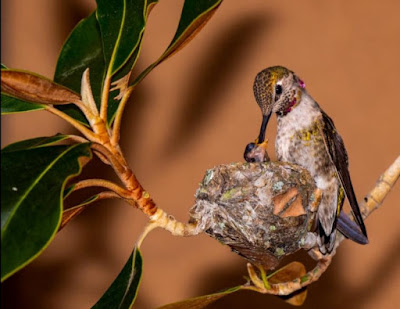 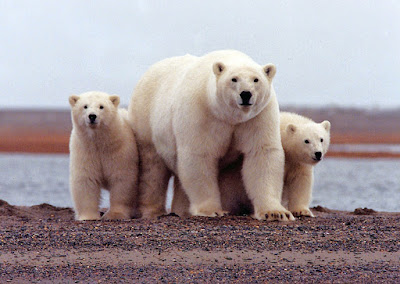 The polar bear (Ursus maritimus) is a hypercarnivorous bear whose native range lies largely within the Arctic Circle, encompassing the Arctic Ocean, its surrounding seas and surrounding land masses. It is a large bear, approximately the same size as the omnivorous Kodiak bear (Ursus arctos middendorffi). A boar (adult male) weighs around 772–1,543 lbs, while a sow (adult female) is about half that size. Although it is the sister species of the brown bear, it has evolved to occupy a narrower ecological niche, with many body characteristics adapted for cold temperatures, for moving across snow, ice and open water, and for hunting seals, which make up most of its diet. Although most polar bears are born on land, they spend most of their time on the sea ice. Their scientific name means "maritime bear" and derives from this fact. Polar bears hunt their preferred food of seals from the edge of sea ice, often living off fat reserves when no sea ice is present. Because of their dependence on the sea ice, polar bears are classified as marine mammals.
Polar bears' fur consists of a dense, insulating underfur topped by guard hairs of various lengths. It is not actually white—it just looks that way.
Each hair shaft is pigment-free and transparent with a hollow core that scatters and reflects visible light, much like what happens with ice and snow.
Polar bears look whitest when they are clean and in high angle sunlight, especially just after the molt period, which usually begins in spring and is complete by late summer. Before molting, accumulated oils in their fur from the seals they eat can make them look yellow.
Polar bears have black skin under which there is a layer of fat that can measure up to 4.5 inches thick.
On land (or on top of the sea ice) the polar bear's thick fur coat—not its fat—prevents nearly any heat loss. In fact, adult males can quickly overheat when they run.
In the water, polar bears rely more on their fat layer to keep warm: wet fur is a poor insulator. This is why mother bears are so reluctant to swim with young cubs in the spring: the cubs just don't have enough fat.

From the Slow Roasted Italian..
One Pot Mexican Pasta with Sausage 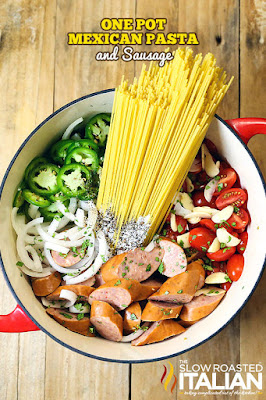 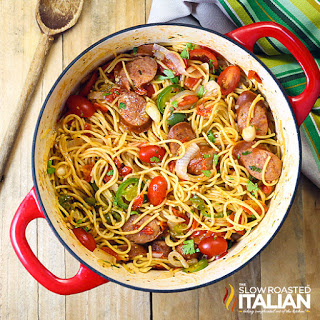 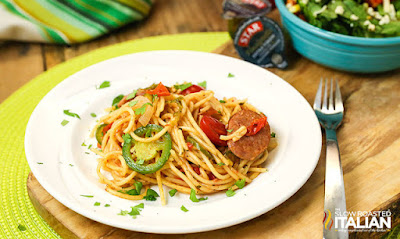 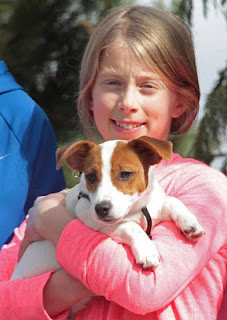 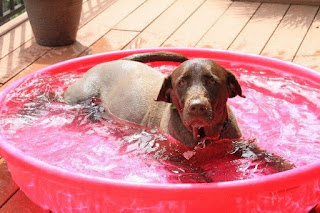 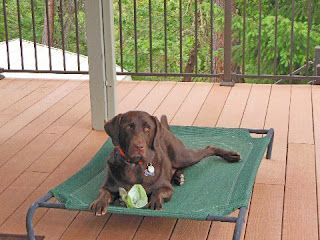 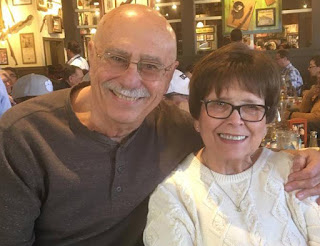 
1877 – U.S. presidential election, 1876: Just two days before inauguration, the U.S. Congress declares Rutherford B. Hayes the winner of the election even though Samuel J. Tilden had won the popular vote on November 7, 1876.
1953 – The Academy Awards are first broadcast on television by NBC.
2002 – U.S. invasion of Afghanistan: Operation Anaconda begins, (ending on March 19 after killing 500 Taliban and al Qaeda fighters, with 11 Western troop fatalities).
And births this date include....
1793 – Sam Houston, American politician, 8th Governor of Tennessee and 7th Governor of Texas (d. 1863)
.... it didn't work out, but I wanted another boy and to name him Sam after Sam Houston because Jerry was born in Texas. As it is, we got our 'Sami'! Ironic on Sam H's birthday! 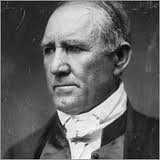 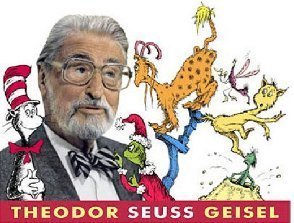 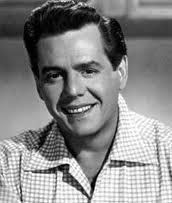 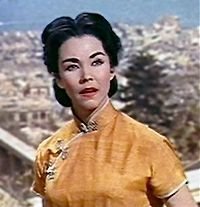 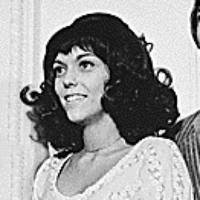 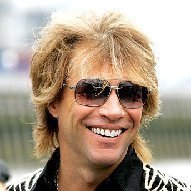 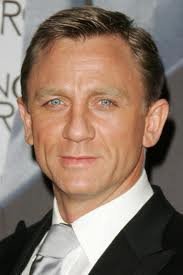 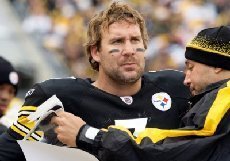 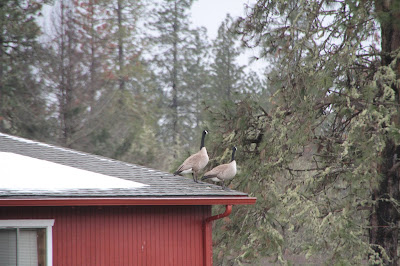 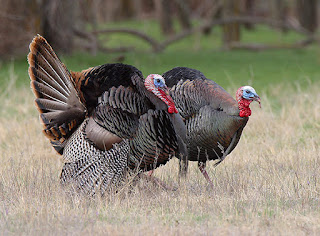 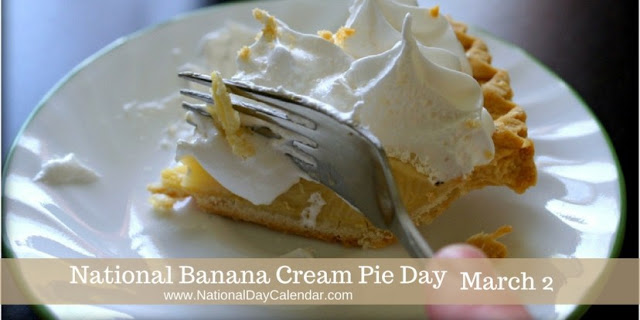 National Banana Cream Pie Day is recognized annually on March 2nd.  Celebrated throughout the United States, pie lovers enjoy this day as they get to indulge in one of America’s most popular cream pies.

Remember, bananas are loaded with potassium!