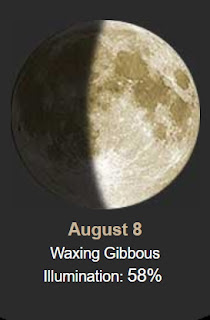 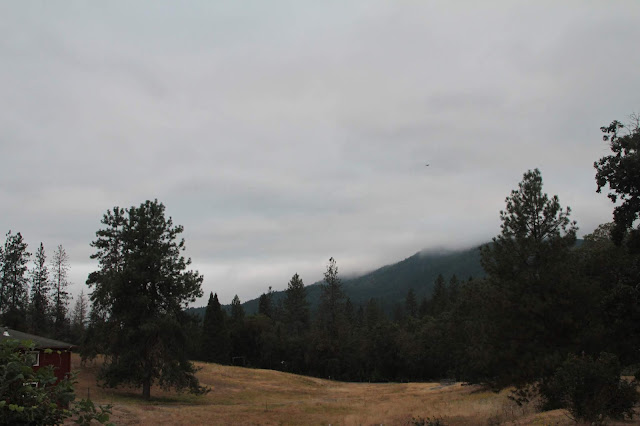 Yesterday stayed clear and sunny until late afternoon when the clouds started moving in and we warmed to 99º. 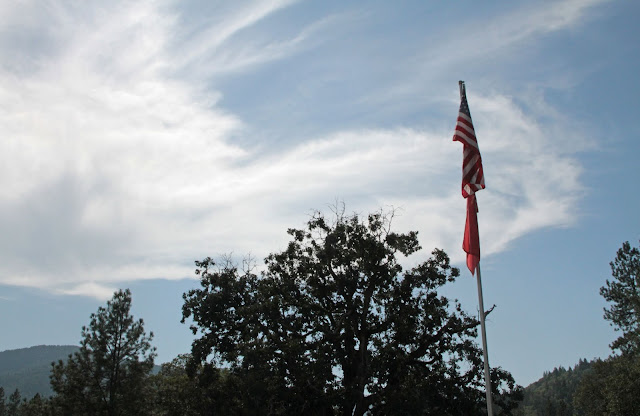 Happy Throw Back Thursday.... These photos from 2008 when I went to Greece. In Athens there are many many stray dogs all over town. Apparently the locals feed them. All very friendly... 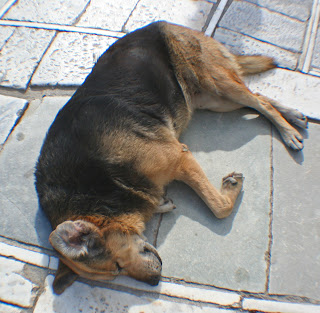 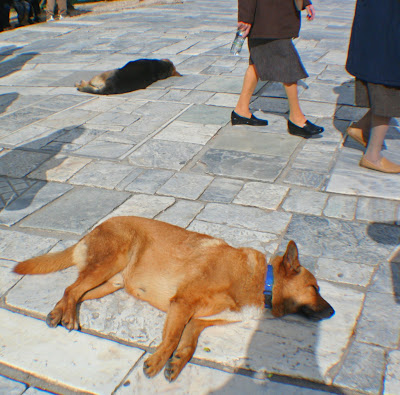 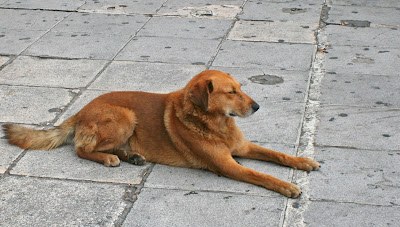 Picture of the Day .. a moose in Alaska suffering too much heat, lays down on a lawn and enjoys the sprinkler cooling him off.... 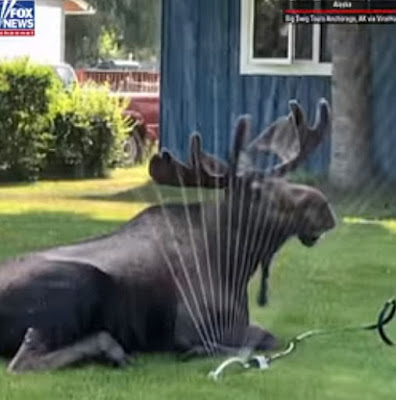 Interesting about the history of mustard...
Mustard is a condiment made from the seeds of a mustard plant(white/yellow mustard, brown/Indian mustard, or black mustard.

The whole, ground, cracked, or bruised mustard seeds are mixed with water, vinegar, lemon juice, wine, or other liquids, salt, and often other flavorings and spices, to create a paste or sauce ranging in color from bright yellow to dark brown. The taste of mustard ranges from sweet to spicy.

Commonly paired with meats and cheeses, mustard is also added to sandwiches, hamburgers, corn dogs, and hot dogs. It is also used as an ingredient in many dressings, glazes, sauces, soups, and marinades. As a cream or as individual seeds, mustard is used as a condiment in the cuisine of India and Bangladesh, the Mediterranean, northern and southeastern Europe, Asia, the Americas, and Africa, making it one of the most popular and widely used spices and condiments in the world.

The Romans were probably the first to experiment with the preparation of mustard as a condiment. They mixed unfermented grape juice with ground mustard seeds to make "burning must", mustum ardens — hence "must ard". A recipe for mustard appears in De re coquinaria, the anonymously compiled Roman cookbook from the late fourth or early fifth century; the recipe calls for a mixture of ground mustard, pepper, caraway, lovage (a large edible white-flowered plant of the parsley family), grilled coriander seeds, dill, celery, thyme, oregano, onion, honey, vinegar, fish sauce, and oil, and was intended as a glaze for spit-roasted boar.

The Romans likely exported mustard seed to Gaul, and by the 10th century, monks of Saint-Germain-des-Prés in Paris absorbed the mustard-making knowledge of Romans and began their own production. The first appearance of mustard makers on the royal registers in Paris dates back to 1292. Dijon, France, became a recognized center for mustard making by the 13th century. The popularity of mustard in Dijon is evidenced by written accounts of guests consuming 320 litres (70 imp gal which equals 280 quarts!) of mustard creme in a single sitting at a gala held by the Duke of Burgundy in 1336. In 1777, one of the most famous Dijon mustard makers, Grey-Poupon, was established as a partnership between Maurice Grey, a mustard maker with a unique recipe containing white wine; and Auguste Poupon, his financial backer. Their success was aided by the introduction of the first automatic mustard-making machine. In 1937, Dijon mustard was granted an Appellation d'origine contrôlée ("protected designation of origin"). Due to its long tradition of mustard making, Dijon is regarded as the mustard capital of the world. 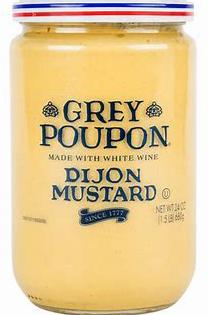 The early use of mustard as a condiment in England is attested from the year 1390 in the book The Forme of Cury which was written by King Richard II's master cooks. It was prepared in the form of mustard balls—coarse-ground mustard seed combined with flour and cinnamon, moistened, rolled into balls, and dried—which were easily stored and combined with vinegar or wine to make mustard paste as needed. The town of Tewkesbury was well known for its high-quality mustard balls, originally made with ground mustard mixed with horseradish and dried for storage, which were then exported to London and other parts of the country, and are even mentioned in William Shakespeare's play King Henry the Fourth, Part II.
The use of mustard as a hot dog condiment is said to have been first seen in the US at the 1904 St. Louis World's Fair, when the bright-yellow French's mustard was introduced by the R.T. French Company. 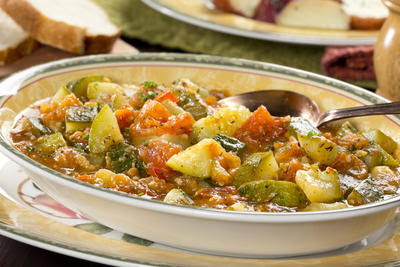 This mouthwatering dish features an all-star summer line-up of zucchini, tomatoes, basil, garlic, and more. To say that our All-Star Zucchini is flavorful is an understatement! It's just as amazing on its own as it is served over a bed of pasta. Yum!

Phil, their daughter Alyssa, and Suz....^

Historically this date........
1908 – Wilbur Wright makes his first flight at a racecourse at Le Mans, France. It is the Wright Brothers' first public flight. 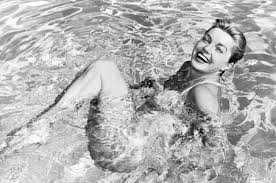 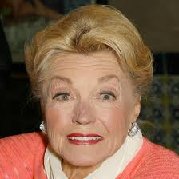 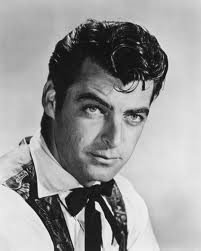 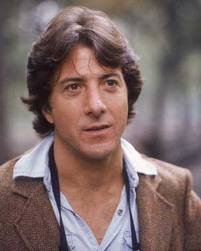 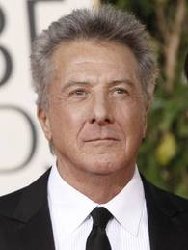 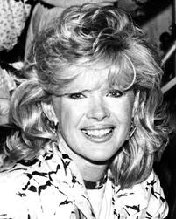 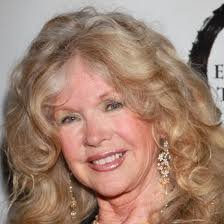 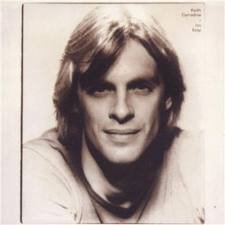 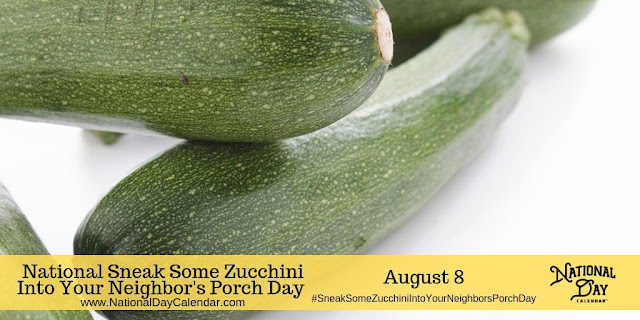 Sneak Some Zucchini Into Your Neighbor’s Porch Day on August 8th offers gardeners a way to rid themselves of extra produce. For some, this day offers a way to rid their garden of an overproducing squash plant.
Did you know that zucchini was a fruit?  Well, if you’re a gardener, you know this fact already.  You also know that zucchini grows in abundance and is ready for harvest in August.  Zucchini growers also know that one plant of zucchini allows you to share this wonderful treat!
Zucchini is also incredibly helpful with weight loss. The produce is low in calories, high in fiber, and full of water. As such, when you eat it, your tummy doesn’t feel empty. Hopefully, you are less likely to overeat. If your zucchini produces well, add it soups, salads, and baked goods.
When you receive a zucchini on your porch, savor the delicious squash. Eat if fresh by slicing it. Other ways to use it are:
Take a moment to visit our recipe page. You just might find a zucchini recipe or two
Tom Roy at wellcat.com created this zucchini holiday while doing years of news & talk radio.
.... and today is also .... 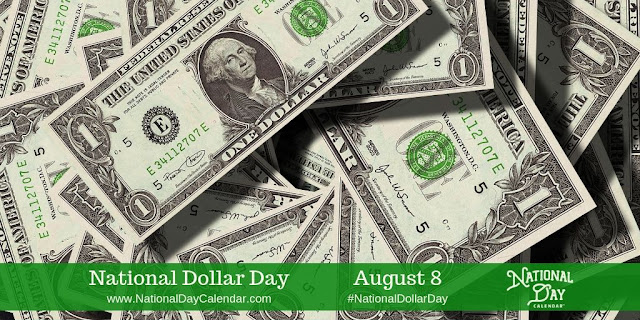 In 1862, the United States printed its first dollar bill. Do you know whose face was printed there? It wasn’t George Washington. The first dollar bill featured Salmon P. Chase, President Lincoln’s Secretary of Treasury.

More Dollar Facts
Interestingly, the dollar bill in our pockets today hasn’t been changed for more than 50 years. While the $5, $10, $20, and $50 earned redesigns in recent years, the single remains unchanged. Due to counterfeiting, redesigns keep the larger currencies ahead of counterfeiters. However, the single doesn’t face attention the more significant notes see.
Above the right number 1 on the face side of the dollar, a tiny bird peeks out. Whether it’s an owl, an eagle or another such bird is uncertain. Like other embedded in the bill’s design, it fuels man conspiracy theories.
Speaking of conspiracy theories, the pyramid on the back fuels a few. It’s part of the Great Seal of the United States. However, the truth of the pyramid represents several things. You’ll find 13 steps on the pyramid equaling the 13 original colonies. The unfinished top represents a young country growing and expanding. Finally, the Eye of Providence with the Latin motto Annuit Coeptis, which means, “It is favorable to our undertakings.”
The number 13 is represented on the dollar bill in several places. Do you know where else?
Opposite the pyramid is an eagle. The image represents both war and peace. In the eagle’s left talon it holds arrows and in its right an olive branch. How many arrows do you think the eagle holds? If you guessed 13, you’d be right.
Above the eagle’s head, there’s a cloud with a constellation. How many stars are in the constellation? Again the number 13 is represented. The eagle includes a shield 13 stripes.

Spend or save a dollar, depending on your preference. Investigate your dollar bill. Where has it been? If you have a dollar in your wallet now, you can track where it has been. Visit the website Where’s George. Enter the serial number. After you spend it, track where your dollar travels next.