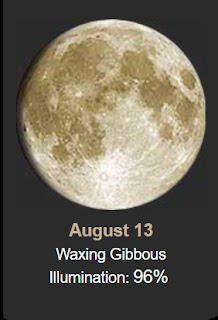 Good 51º clear sunny morning.
Yesterday stayed clear and sunny and we topped at 94º. 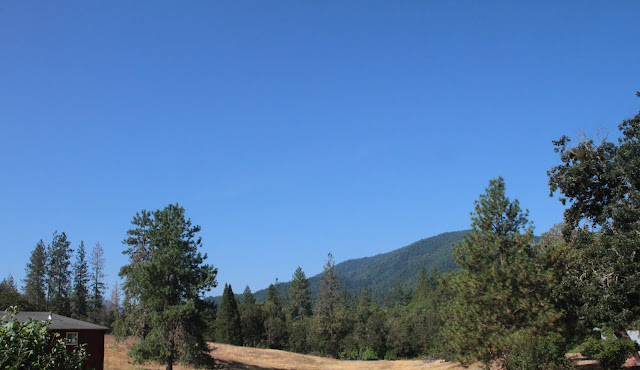 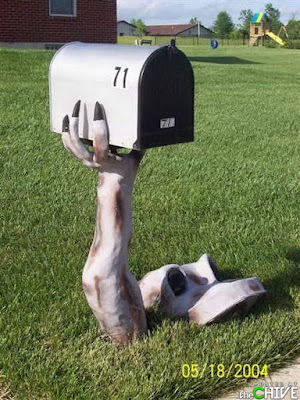 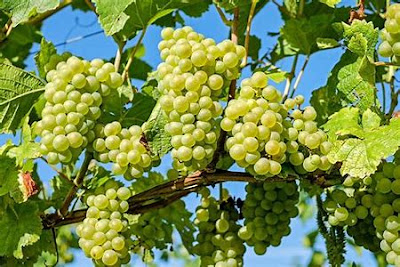 Viticulture (from the Latin word for vine) is the science, production, and study of grapes. It deals with the series of events that occur in the vineyard. It is a branch of the science of horticulture.
Duties of the viticulturist include monitoring and controlling pests and diseases, fertilizing, irrigation, canopy management, monitoring fruit development and characteristics, deciding when to harvest, and vine pruning during the winter months.
The earliest evidence of grape vine cultivation and wine making dates back 7,000 years. The history of viticulture is closely related to the history of wine, with evidence that humans cultivated wild grapes to make wine as far back as the Neolithic period. Evidence suggests that some of the earliest domestication of Vitis vinifera occurred in the area of the modern countries Georgia and Armenia. The oldest-known winery was discovered in the "Areni-1" cave in Vayots Dzor, Armenia. Dated to c. 4100 BC, the site contained a wine press, fermentation vats, jars, and cups. Archaeologists also found V. vinifera seeds and vines. Commenting on the importance of the find, McGovern said, "The fact that wine making was already so well developed in 4000 BC suggests that the technology probably goes back much earlier." There is also evidence of grape domestication in the Near East in the early Bronze Age, around 3200 BC.
In Persian legend, King Jamshid banished a lady of his harem, causing her to become despondent and contemplate suicide. Going to the king's warehouse, the woman sought out a jar marked "poison" containing the remnants of the grapes that had spoiled and were now deemed undrinkable. After drinking the fermented wine, she found her spirits lifted. She took her discovery to the king, who became so enamored of his new drink that he not only accepted the woman back but also decreed that all grapes grown in Persepolis would be devoted to wine making.

Wine in ancient Egypt was predominantly red. Due to its resemblance to blood, much superstition surrounded wine-drinking in Egyptian culture. Shedeh, the most precious drink in ancient Egypt, is now known to have been a red wine and not fermented from pomegranates as previously thought.[34] Plutarch's Moralia relates that, prior to Psammetichus I, the pharaohs did not drink wine nor offer it to the gods "thinking it to be the blood of those who had once battled against the gods and from whom, when they had fallen and had become commingled with the earth, they believed vines to have sprung". This was considered to be the reason why drunkenness "drives men out of their senses and crazes them, inasmuch as they are then filled with the blood of their forebears"

In the context of wine, Australia, New Zealand, South Africa and other countries without a wine tradition are considered New World producers. Wine production began in the Cape Province of what is now South Africa in the 1680s as a business for supplying ships. Australia's First Fleet (1788) brought cuttings of vines from South Africa, although initial plantings failed and the first successful vineyards were established in the early 19th century. Until quite late in the 20th century, the product of these countries was not well known outside their small export markets. For example, Australia exported mainly to the United Kingdom; New Zealand retained most of its wine for domestic consumption; and South Africa was often isolated from the world market because of apartheid). However, with the increase in mechanization and scientific advances in wine making, these countries became known for high-quality wine. A notable exception to the foregoing is that the Cape Province was the largest exporter of wine to Europe in the 18th century. 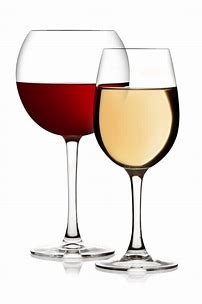 How long has it been since you made a Tuna Noodle Casserole? How about this one, from Mr. Food... 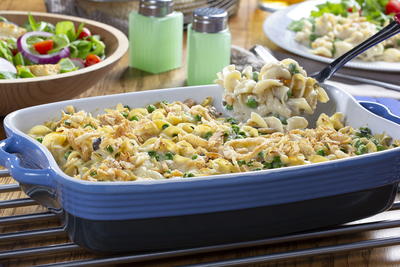 Our Good Ol' Tuna Noodle Casserole is a comforting classic that first become popular in the 1950s. Our version has the same mouthwatering flavors, but we've added a few shortcuts, so that you have more time to spend with the family. This tuna noodle casserole has a nostalgic feel, and you might just find all those childhood memories coming to join you at the table.
****
from me.... if you don't like peas, use broccoli and or cooked carrots or whatever vegetable is your favorite!
Special day today, buddy/pal/friend of mine, and hubby of the awesome Alice, Patrick Reardon (LASD ret) is celebrating today. HAPPY BIRTHDAY TO MY SPECIAL FRIEND! xo 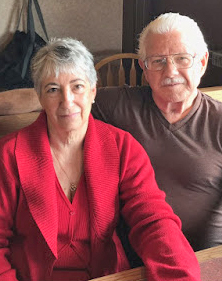 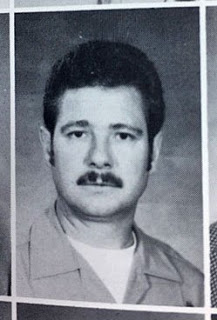 Historically this date.....
1918 – Women enlist in the United States Marine Corps for the first time. Opha Mae Johnson is the first woman to enlist.    LOL, "BAMS" ! (for those of you who don't know... it stands for Broad Assed Marines!  If that is the case then female deputies should be called "BADS" !!!)


1969 – The Apollo 11 astronauts are released from a three-week quarantine to enjoy aticker tape parade in New York, New York. That evening, at a state dinner in Los Angeles, California, they are awarded the Presidential Medal of Freedom by U.S. President Richard Nixon. 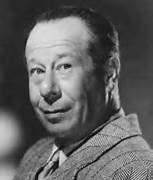 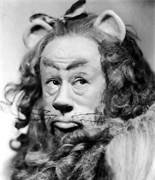 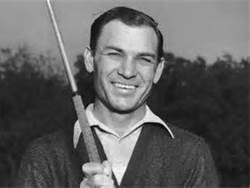 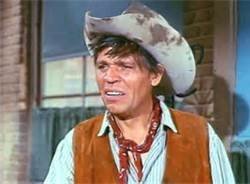 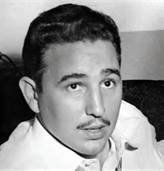 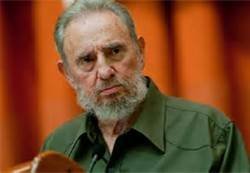 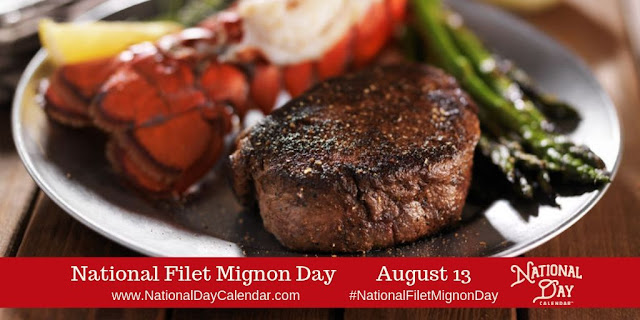 National Filet Mignon Day on August 13 celebrates a specialty cut of beef.  Usually, from a steer or heifer, a filet mignon is a steak taken from the smaller end of the tenderloin of the beef carcass.
Since the filet mignon comes from the most tender portion of the tenderloin, it’s one of the most prized cuts of beef. Therefor, expect this steak to be the most expensive.
Filet mignon is commonly cut into 1 inch to 2 inch thick portions, grilled and then served as is.  When found in grocery stores, filet mignon is already cut into bacon-wrapped portions.  The usual method for cooking the filet mignon is to cook it on high heat by either grilling, pan-frying, broiling or roasting.  Restaurants may sometimes prepare the fillets served in a cognac cream sauce, au Poivre with peppercorns or in a red wine reduction.
Due to the low levels of fat found in the fillets, bacon is often used in cooking.  The bacon is wrapped around the fillet and pinned closed with a wooden toothpick.  The bacon adds flavor, and this process keeps the fillet from drying out during the cooking process. 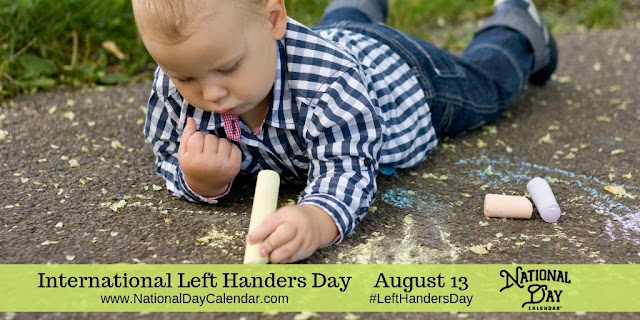 International Left Handers Day on August 13th recognizes all those individuals who have mastered using their left hand in a right-handed world. We take our hats off to you – left-handed!
Approximately 10% of the population are southpaws. Scientists don’t know why a person develops left-handedness. But it’s more likely a child will be left-handed if one parent is a lefty, too. Parents of left-handed children used to force them to use their right hands. In the eyes of right-handers, the predominant use of the left hand seemed evil. Parents feared their communities would shun their children. While we accept left-handedness more readily than days gone by, its occurrence hasn’t increased.
Many lefties seek to blend in because they will stand out soon enough. Their unique quality makes them feel awkward. They bump elbows or seem like a klutz. However, in a world designed for the right-handed, those who are other dominant adapt quite well. For example, eight United States presidents were left-handed, including Ronald Reagan, George H.W. Bush, Bill Clinton, and Barack Obama. Would the Sistine Chapel and the Mona Lisa stand the test of time if Michaelangelo and Leonardo de Vinci had been right-handed?
Left Handers Day recognizes the uncommon individual who throws, catches, writes, and uses a fork with their left-hand. They view the world just a little differently. At a restaurant, they seek out the seat that will place their dominant elbow on the outside of the booth. Right-handed athletes groan a bit when the southpaw shows up as an opponent on the roster. They present a challenge right-handers aren’t always sure how to handle due to lack of practice. Lefties square off against righties all the time.
Don’t be shy on Left-Handers Day.  Show the world how brilliant and unique you are!

Take a left-handed friend to lunch or out for coffee. If you’re right-handed, try doing everything with your left hand.
Educators, visit the National Day Calendar Classroom for a project designed just for Left-Hander’s Day.