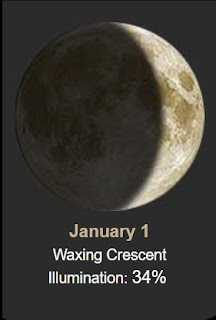 Last night it was chair, wine, cat napping in my lap, and TV. 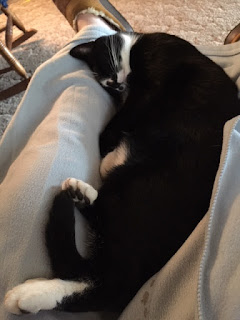 I watched the ball drop in New York at Times Square.... 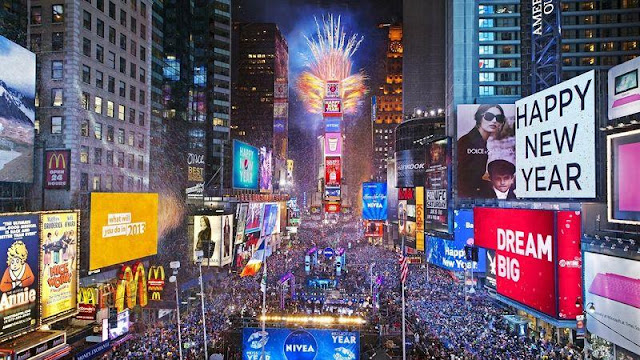 Spectators started assembling in early afternoon for the made-for-TV extravaganza. As has been the case for years, the celebration took place under tight security, with party goers checked for weapons and then herded into pens, ringed by metal barricades, where they waited for the stroke of midnight.
People who arrive early enough to grab a standing spot in Times Square itself may have had a good view of the stages where the entertainers performed. The rest of the throngs, stuffed into pens stretching several blocks north toward Central Park, were able to follow the action on viewing screens.
There are no public toilets in the pens, backpacks are banned and there are no garbage cans either, so picnicking for the event can be rough. But revelers had plenty of companionship, though experts say probably well short of the 1 million to 2 million spectators claimed by city officials and organizers.
Thousands of police officers were on hand to provide security, with the help of bomb-sniffing dogs, 1,225 security cameras and 235 "blocker vehicles" used to stop any potential vehicle attacks.
The ball dropped during the midnight countdown. This year, the ball was a 12-foot (3.5-meter) diameter geodesic sphere covered with 2,688 Waterford crystal triangles lit by 32,256 LEDs. The numerals "2020" burst into light at midnight accompanied by pyrotechnics and the release of 3,000 pounds of confetti.

December 31, 1907 marked the first Times Square ball drop in history, when a 700-pound, 5-feet-in-diameter ball made of iron and wood and covered with 100 light bulbs made its way down in time to ring in January 1st. The event was the brainchild of Adolph Ochs, owner of the New York Times, and included an all-day street festival culminating in fireworks to the delight of the more than 200,000 attendees.
You know what...... watching it on TV was much better! No public bathrooms? Locked inside a fenced area? My comfy chair, wine, and a bathroom close by was the BEST!

Then it's Rose Parade time this morning....
The Tournament of Roses Parade, typically shortened to Rose Parade, is a parade held annually on the morning (8:00 am Pacific Time) of New Year's Day in Pasadena, California. 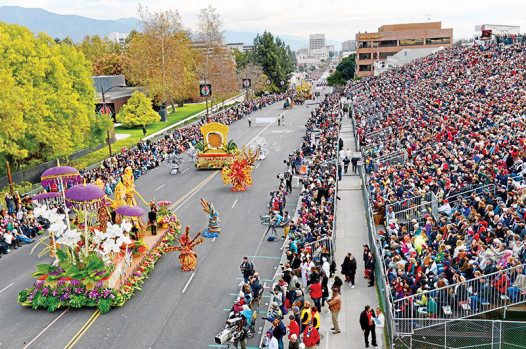 It is produced by the non-profit Pasadena Tournament of Roses Association and includes flower-covered floats, marching bands, and equestrian units. The parade, whose route is mostly along Colorado Boulevard, is followed by the Rose Bowl collegiate football game in the afternoon. When New Year's Day falls on a Sunday, the parade and the Rose Bowl game are moved to the next day, Monday.
First produced on January 1, 1890, the Rose Parade is watched in person by hundreds of thousands of spectators on the parade route, and is broadcast on multiple television networks in the United States. It is seen by millions more on television worldwide in more than 100 international territories and countries. The Rose Bowl is a college football game that was added in 1902 to help fund the cost of staging the parade.
Members of Pasadena's Valley Hunt Club first staged the parade in 1890. Since then the parade has been held in Pasadena every New Year's Day, except when January 1 falls on a Sunday. In that case, it is held on the subsequent Monday, January 2. This exception was instituted in 1893, as organizers did not wish to disturb horses hitched outside Sunday church services. (This event was held even during both World War years.) 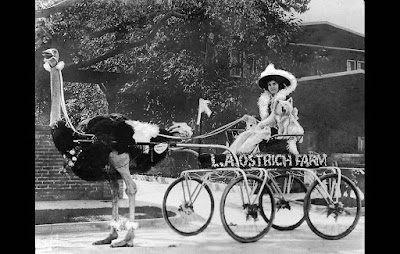 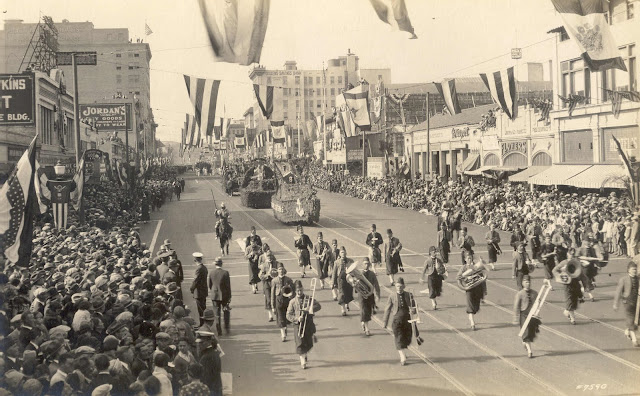 The stately Italian Renaissance-style mansion (391 Orange Grove Avenue, Pasadena) of William Wrigley Jr. (the maker of Wrigley's chewing gum) was offered to the city of Pasadena after Mrs. Wrigley's death in 1958, under the condition that their home would be the Rose Parade's permanent headquarters. 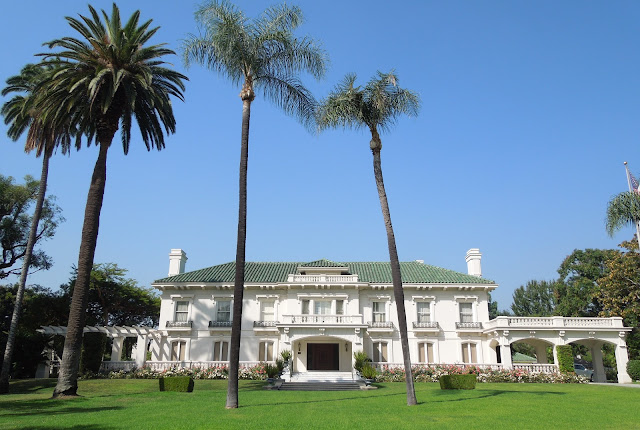 Tournament House is the name given the former home where the organization is headquartered. 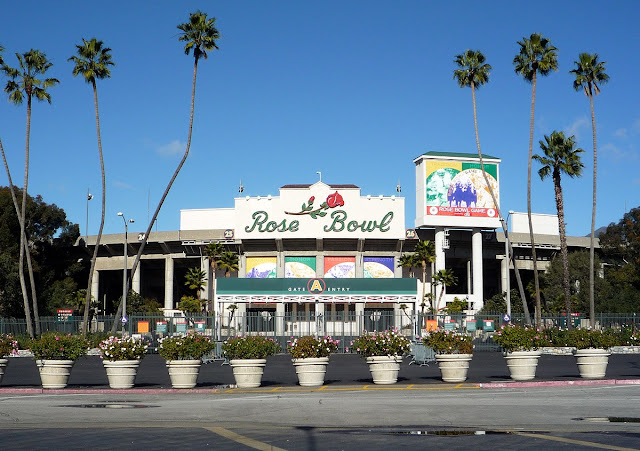 The first associated football game was played on January 1, 1902. Originally titled the "Tournament East-West football game," it is considered to be the first Rose Bowl. The next game was not played until New Year's Day 1916; they have been played annually since then. The game derives its modern name from Rose Bowl Stadium, which was built for the 1923 game. 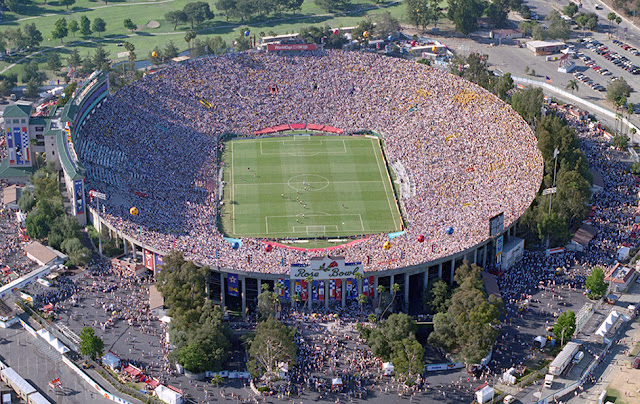 The game today is between Oregon Ducks and Wisconsin Badgers.
https://bleacherreport.com/articles/2869143-rose-bowl-2020-oregon-vs-wisconsin-tv-schedule-time-and-odds


Special birthday today, my neighbor Frank Mize is celebrating. HAPPY BIRTHDAY FRANK!! Thanks for being a special neighbor and friend. 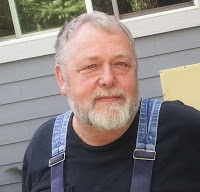 1890 – The Tournament of Roses Parade in Pasadena, California, is first held.

1908 – For the first time, a ball is dropped in New York City's Times Square to signify the start of the New Year at midnight. 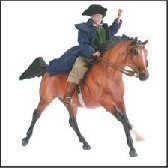 "Love to eat them mousies. Mousies what I love to eat.
Bite they little heads off and nibble on they tiny feet." 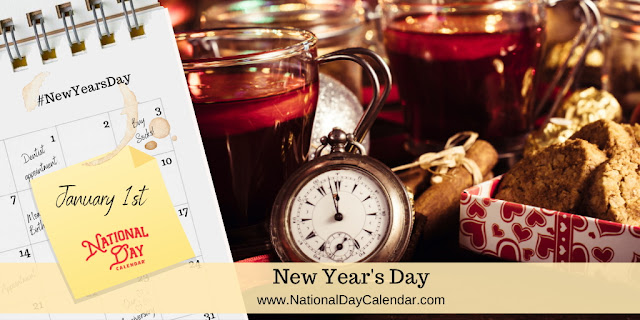 Nearly the entire world recognizes New Year’s Day on January 1st. It’s also one of the most celebrated holidays of the year.
Celebrations will begin in the Pacific Ocean with Samoa celebrating the New Year before the rest of the world. The latest stroke of midnight will occur in the middle of the Pacific Ocean near Baker Island, which is halfway between Hawaii and Australia.

Traditions around the world:

The new year has been celebrated for millennia. The earliest record of new year’s celebrations occurred during Babylonian times. However, January 1st wasn’t always the designated day. For example, the first new moon after the vernal equinox ushered in the new year at one time. These festivities occurred in Martius (March), the first month in the early Roman calendar, which only had ten months.
King Pompilius later added the months Januarius (named for Janus, the pagan god of gates, doors and beginnings) and Februarius bringing the calendar to 12 months. It was Julius Caesar who created the Julian calendar, which most closely resembles the Gregorian calendar a majority of the world follows today.
Romans celebrated January 1 in honor of Janus, offering sacrifices, giving gifts, and decorating with laurel branches. With his two faces, the god Janus was able to look toward the past and forward to the future. Celebrating the first day of the year in the appropriately named month of January, Romans made sacrifices to Janus, giving gifts and general revelry. 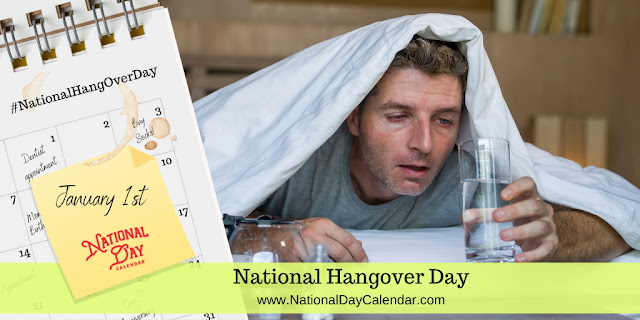 On January 1st, National Hangover Day nurses the aching heads of all of us who over celebrated New Year’s Eve each year.

Symptoms of a Hangover 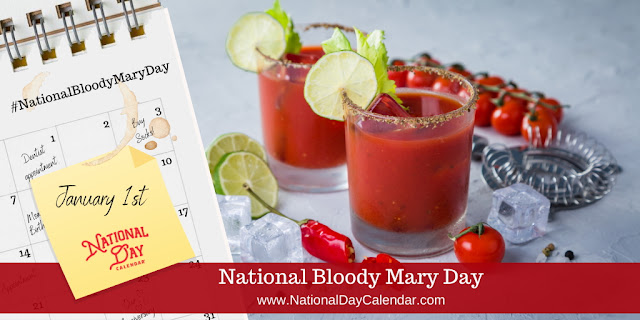 For all those who celebrated more than they should have, National Bloody Mary Day serves up one of the world’s most popular hangover cures on January 1st.
It would seem the Bloody Mary is the product of several hard day’s nights, lackluster cocktails, and seemingly tasteless liquor.
When the Russian Revolution pressed fleeing men into Paris and to Harry’s Bar at The Ritz Hotel, bartender Ferdinand “Pete” Petiot mixed up a cocktail that eventually made its way to post-prohibition America.
According to Food and Drink in American History: “Full Course” Encyclopediaby Andrew F. Smith, the Bloody Mary made its debut in Paris at The Ritz Hotel in 1921. Originally named the Bucket of Blood, it also went by the name Red Snapper. Petiot later left Paris and introduced the vodka, tomato juice, lemon juice, Worcestershire, cayenne, and salty cocktail to the New York King Cole Bar scene when prohibition ended.
Some attribute the name to notorious Queen Mary Tudor, who executed hundreds of Protestants in the name of Catholicism during her short five-year reign from 1553 to 1558. Others claim Petiot’s girlfriend of the same name receives the credit.
Today’s Bloody Mary’s include a variety of ingredients from pickles, olives, and celery to bacon, horseradish, tobacco, and peppers.