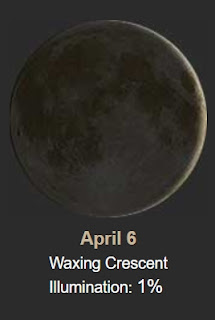 Good 42º cloudy morning.
The rain started coming down in the morning yesterday... on and off. 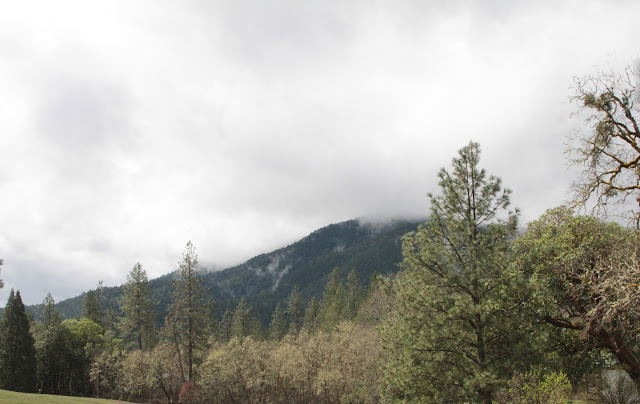 Then later it came down in buckets... only for a few minutes and we got 1/2" !!! Then the wind blew like crazy and the dark clouds moved...
Amazingly enough, all the clouds blew away and the sky was pure blue and it was sunny! 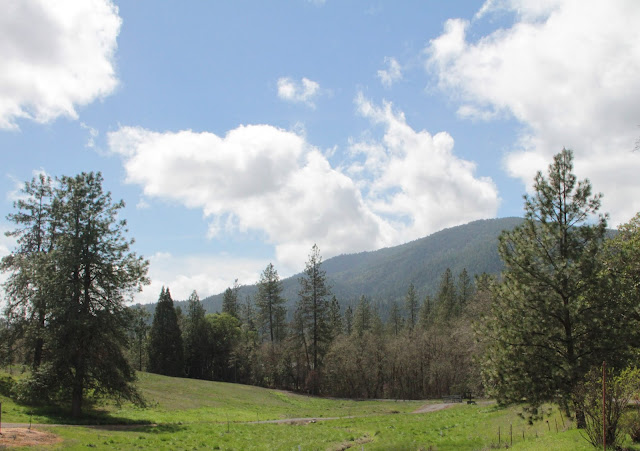 Bruiser was holding down the porch swing....

The video cam in downtown Grants Pass had water all over the lens... 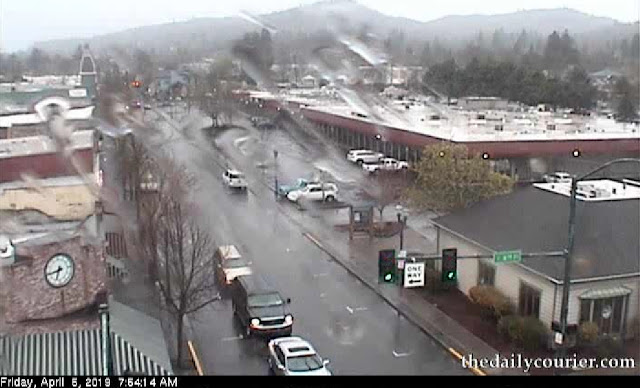 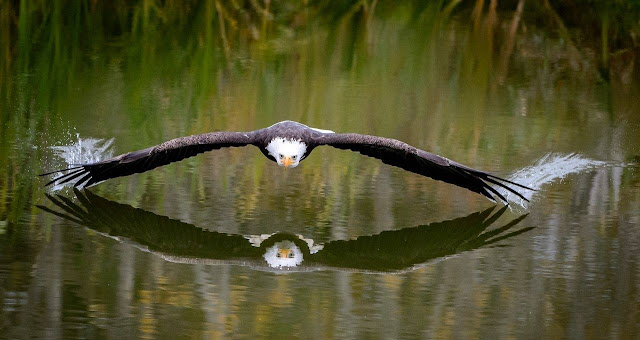 Interesting that female seahorses impregnate their male mates, rather than the other way around. 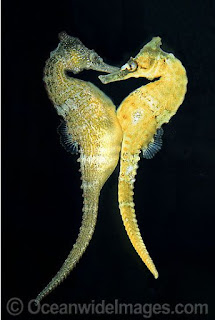 The reproductive process of a seahorse begins when a male and a female meet up and “dance”. For several days prior to the actual act of mating, the two fish (yes, they are fish) will meet to intertwine their tails and swim together. They also sometimes grip the same strand of sea grass with their tails, and whirl around it in unison. Scientists believe this courtship and dancing synchronizes the movements of the two fish to prepare the male to receive eggs at the same time the female is ready to deposit them.
After several days of this, the male blows water through an egg pouch on his stomach. The water flow expands and opens the pouch to demonstrate to the female that it is empty and ready for her to insert her… ovipositor, an organ used to lay eggs.
At that point, the two swim in a sort of snout-to-snout embrace, spiraling upward through the water trying to line up so that the female can inserts her ovipositor into the male’s pouch. She does this several times, resting between, to avoid becoming exhausted.
As the eggs leave the female body, she slims down. As the male receives the eggs, he plumps up.  This process can last up to eight hours.  In the end, she deposits anywhere from a few dozen to thousands of eggs into the male’s pouch, depending on the species of seahorse.
When it’s done, the female does not stay to cuddle, but simply swims away and finds a nice place to rest while her ovipositor contracts, which can take a couple hours.
After his lady friend is gone, the male attaches himself to a nearby plant and releases sperm directly into the water around him to fertilize the eggs, which are now embedded in the wall of his pouch. The pouch provides oxygen and prolactin to nurture the eggs.
While the female chose to leave right after the mating, she’s at least nice enough to drop by and check up on her pregnant partner.  During the gestation period, anywhere from two to four weeks, the female visits the male on a daily basis, though not for long.  The two simply interacting for a few minutes each time, swimming together much like they did during courtship.
As the male prepares to give birth, his pouch gets rounder and rounder. In the minutes immediately preceding birth, his muscles contort, bending him backward and forward repeatedly for about ten minutes until all the babies (known as “fry”) explode out of the pouch.  There can be as few as eight and as many as 200 seahorse fry born at a time. 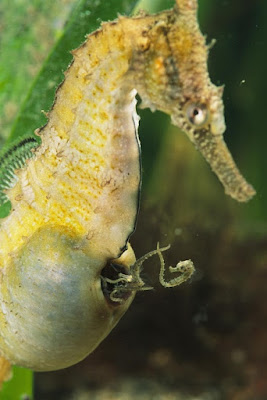 Amazingly, the male’s pouch returns to its normal size and position in only about an hour and he is ready to mate again within a few hours, and sometimes even does!
The male seahorse may give birth, but as with many fish, he does not stick around to nurture the young, but leaves them on their own. In the end, around 5 infant seahorses in every 1,000 survive to adulthood. Many are eaten by predators or die of starvation when ocean currents push them away from food sources.
Even so, by fish standards, 5 out of 1,000 is actually a pretty good rate, thanks to the father’s pouch protecting the little ones for a time, while other fish often lay eggs and immediately abandon them after fertilization.
Here's another two-in-one recipe that'll leave everyone at the potluck asking for more. Mr. Food's Deviled Egg Macaroni Salad takes two summer favorites, deviled eggs and macaroni salad, and puts 'em together to deliver one dish that has twice the flavor! 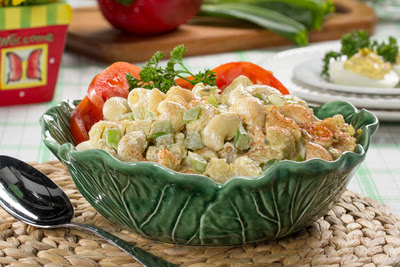 Note
You may need to add a little more mayonnaise to moisten before serving.

Historically this date....
1896 – In Athens, the opening of the first modern Olympic Games is celebrated, 1,500 years after the original games are banned by Roman Emperor Theodosius I.
.... and here I am at the Panathinaaiko Stadium on October 31st 2009.... 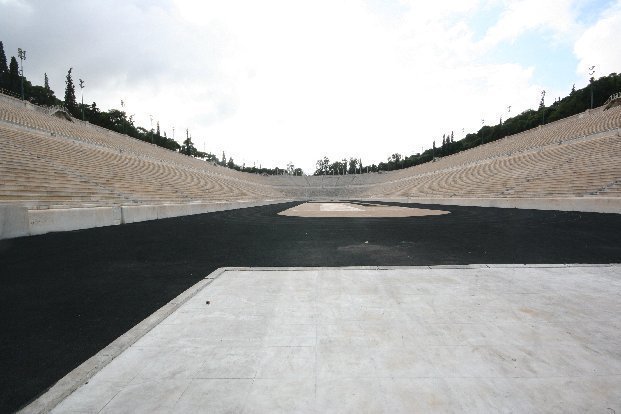 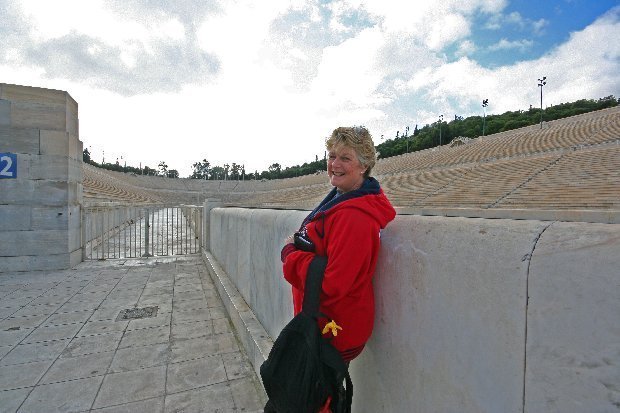 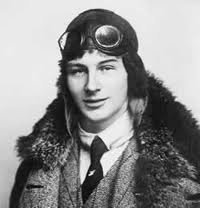 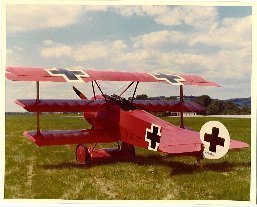 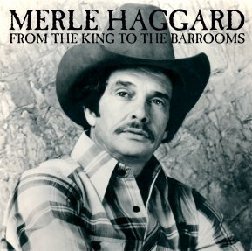 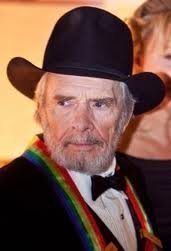 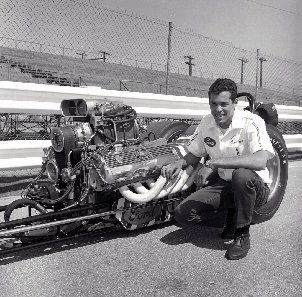 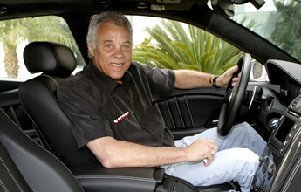 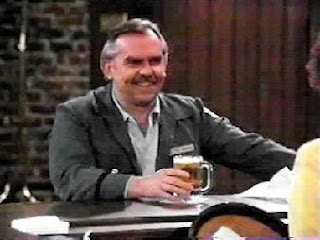 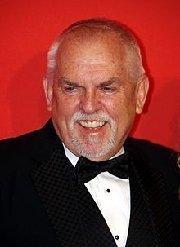 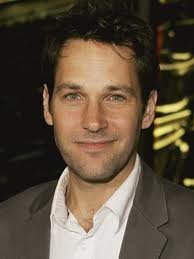 Yesterday I made the Garden Quiche I posted on 3-30....https://oregonsue.blogspot.com/2019/03/weather-babysitting-dash-bruiser.html
I used mozzarella cheese instead of the jack cheese... used a pie shell from the market..... 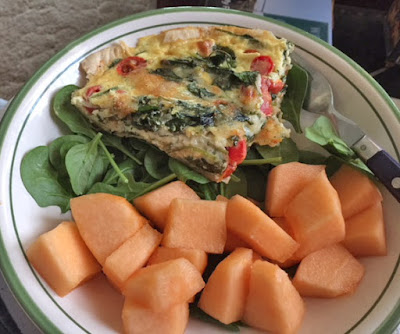 ^I know, not fancy but I love raw spinach, so served it on top of some along with some cut up cantaloupe. Really GOOD!!! 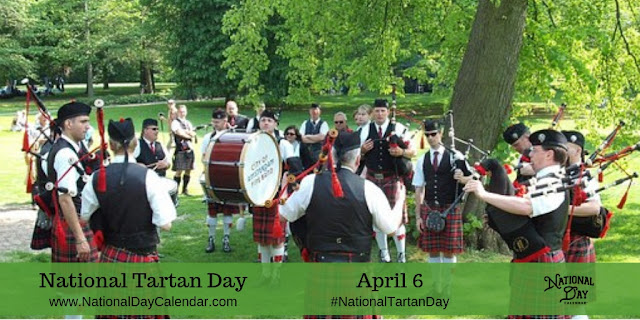 April 6 is National Tartan Day. This is an official national observation.
National Tartan Day honors all the Scottish heritage that flows through this nation. From its earliest beginnings, Americans with Scottish ancestry endeavored for that freedom as much as any American.  It was in their blood.

It was 400 years before they had declared –
“For we fight not for glory, nor riches, nor honours, but for freedom alone which no good man give sup except for his life.”  – from the Declaration of Arbroath

It might be surprising to know that of the 13 governors in the newly established United States; nine were Scots. There are 56 signatures on the Declaration of Independence. Some scholars suggest nearly a third of those signers were of Scottish descent.
Not only can we point to the country’s founding fathers, but of the 43 Presidents who have taken office, 33 have been of Scottish descent.
Those with Tartan blood were and are independent and resourceful. They are prolific inventors and writers. They are talented musicians and artist, experienced leaders and scholars. In the United States today, over 11 million Americans claim Scottish or Scotch-Irish roots. That makes them the 8th largest ethnic group in the United States.
HOW TO OBSERVE
Check local civic websites for parades, ceremonies and events.  Wear your tartan and use #NationalTartanDay to post on social media.
HISTORY
On March 20, 1998, the United States Senate passed Resolution 155 that designated April 6th of each year as National Tartan Day to recognize Scottish Americans and their achievements and contributions to the United States. On March 9, 2005, the House passed Resolution 41 and by Presidential Proclamation, it was signed by President George W. Bush on April 4, 2008.
On this day in 1320, Scot’s signed the Declaration of Arbroath, formally declaring their independence from England.  For more information visit www.americanscottishfoundation.com.
My Mother's grandfather was John Dunbar from Edinburugh .... family tartan: 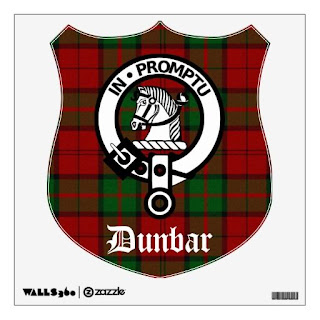 There is a Dunbar Castle in Scotland...
https://en.wikipedia.org/wiki/Dunbar_Castle
Jerry's dad, Hardin Maxwell, was of Scottish heritage. Here is the Maxwell crest: 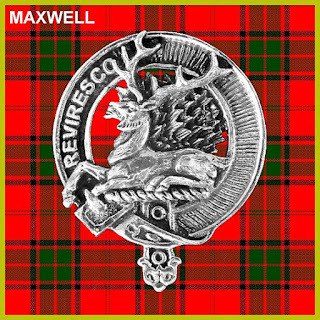 Here is a list of Scottish Clans...
https://en.wikipedia.org/wiki/List_of_Scottish_clans
Posted by Oregon Sue at 7:44 AM 2 comments: