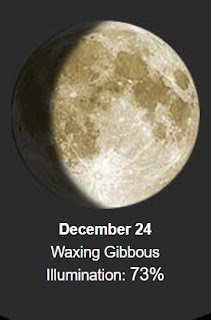 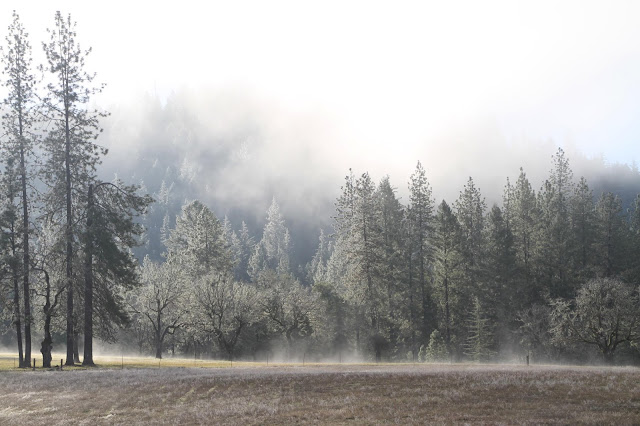 Then the blue sky and sun started showing up.... 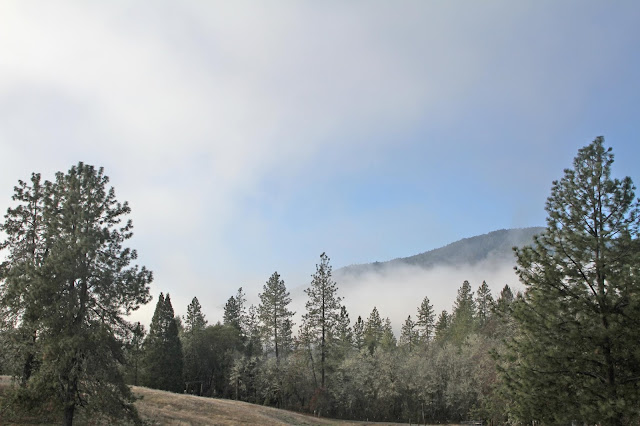 All the clouds disappeared and we topped at 56º.
Happy Christmas Eve Day
Picture of the Day ... let's hope Santa stays safe and this doesn't happen! 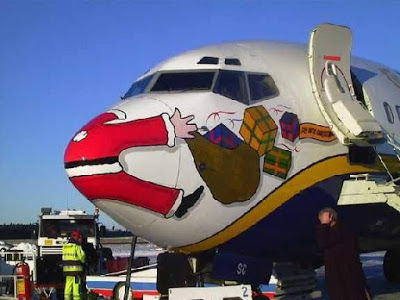 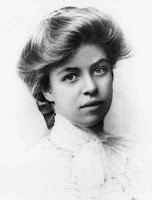 Eleanor Roosevelt was the niece of President Theodore Roosevelt, and the wife of President Franklin D. Roosevelt. Eleanor Roosevelt and Franklin Roosevelt were 5th cousins, once removed, and had known each other since they were two. They were married on March 17, 1905, in a ceremony that featured Theodore walking his niece down the aisle. When asked for his thoughts on the Roosevelt–Roosevelt union, Theodore Roosevelt said, "It is a good thing to keep the name in the family." Eleanor is the only first lady to not change her last name upon marriage.
From Mr. Food 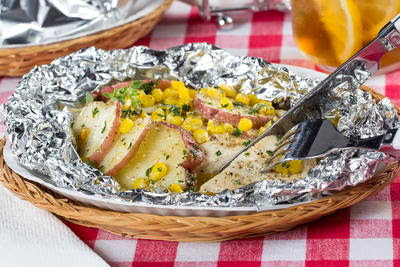 It doesn't get any easier than this! This no-mess and no-fuss recipe for Chicken, Corn, & Potato Packets is a real lifesaver on busy days or on camping trips. Each portion cooks up inside of its own foil packet, so once you're done all you have to do is throw away the foil. Plus, each packet delivers a whole lot of flavor!

**You can make these on a grill! Just preheat the grill to medium-high heat, place prepared chicken packets on the grill, close the cover, and cook for 15 to 20 minutes or until no pink remains in chicken.

Historically this date.....
1818 – The first performance of "Silent Night" takes place in the church of St. Nikolaus in Oberndorf, Austria.

1826 – The Eggnog Riot at the United States Military Academy begins that night, wrapping up the following morning.

1968 – Apollo Program: The crew of Apollo 8 enters into orbit around the Moon, becoming the first humans to do so. They performed 10 lunar orbits and broadcast live TV pictures that became the famous Christmas Eve Broadcast, one of the most watched programs in history.

2000 – The Texas 7 hold up a sports store in Irving, Texas. Police officer Aubrey Hawkins is murdered during the robbery. 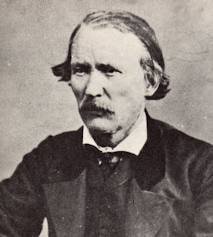 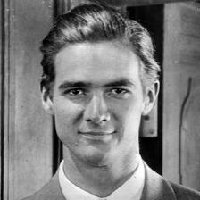 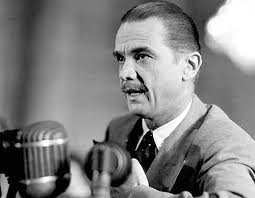 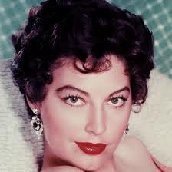 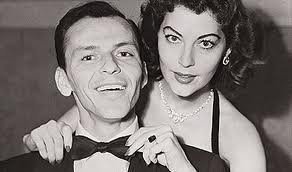 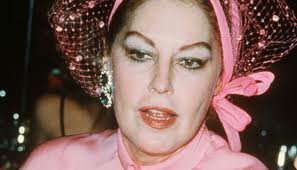 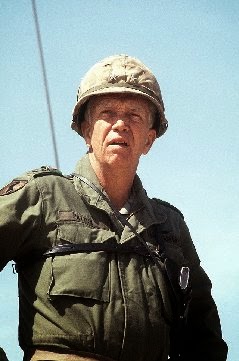 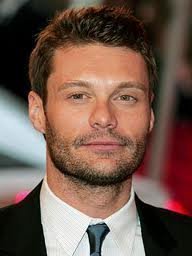 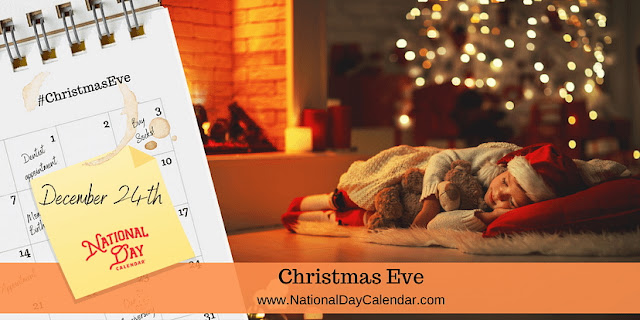 Christmas Eve on December 24 kicks off a series of holiday traditions. Some are ancient practices with a modern spin, while others date back hundreds of years.
Christmas Eve is filled with both religious and nonreligious traditions. Religious traditions center around the birth of Jesus. Different denominations have their own traditions. On Christmas Eve Roman Catholics and Anglicans hold Midnight Mass. Lutherans celebrate with candlelight services and Christmas carols. Many evangelical churches hold evening services where families celebrate Holy Communion.
Around the world, Christmas Eve is celebrated with a variety of foods. In Italy, they celebrate the Feast of Seven Fishes. Russians traditionally serve a 12-dish Christmas Eve Supper before opening gifts. Meanwhile, in Bulgaria, the Christmas Eve meal consists of an odd number of meatless dishes.
Besides food and religious services, the holiday is when Santa Clause takes to the sky in his sleigh to deliver Christmas gifts around the world. Other names for the white-bearded man in a red suit include Father Christmas, Kris Kringle, and Saint Nicholas. No matter what he is called, the legend of Santa is based on a real-life man named Saint Nicholas of Myra. The early Christian bishop was known for secret gift-giving, as well as many miracles. Through the years, the legend of Santa grew to include the North Pole, a sleigh driven by reindeer, a naughty or nice list, and his jolly laugh, “ho, ho, ho.”

Hearkening back to the 16th century when Christian traditions were first influenced by winter solstice celebrations, decorating and preparing for Christmas Day took place the evening before. This included putting up the tree, decorating with mistletoe and holly, bringing in the Yule log and making dishes for the Christmas meal.
Jewish traditions have historically influenced Christian practices, too. One such practice is that the church day traditionally begins in the evening. Christian churches have celebrated Christmas Eve in part because it is believed that Jesus was born at midnight. Many churches today hold Christmas Eve services or Midnight Masses. They may also hold candlelight vigils, Nativity productions or sing carols.
And it's also........ 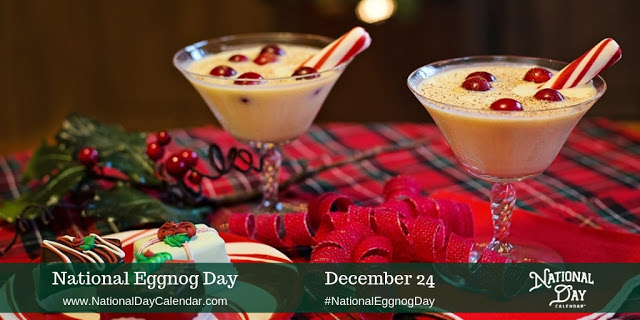 National Eggnog Day is observed once a year on the day before Christmas.  Also known as egg milk punch, eggnog is a very popular drink throughout the United States during the holidays.
Eggnog is a sweetened dairy-based beverage that is traditionally made with milk and cream, sugar, whipped eggs and spices.  When served at parties and holiday get-togethers, liquor is often added to the eggnog such as brandy, rum, whiskey, bourbon, vodka or a combination of liquors.  The filled glass is typically garnished with a sprinkle of cinnamon, nutmeg or pumpkin spice.
Eggnog may be added as a flavoring to food or drinks such as coffee, tea, breads, pies, cakes or puddings.
The origin of the eggnog drink is debated.  It is the belief of some that the drink was originally developed in East Anglia, England, while others believe it originated as a medieval European beverage made with hot milk.
Posted by Oregon Sue at 7:33 AM No comments: