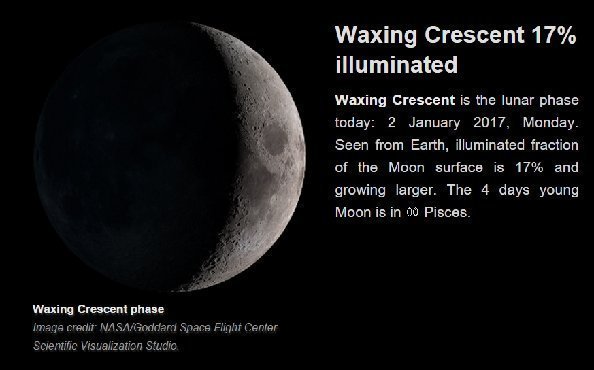 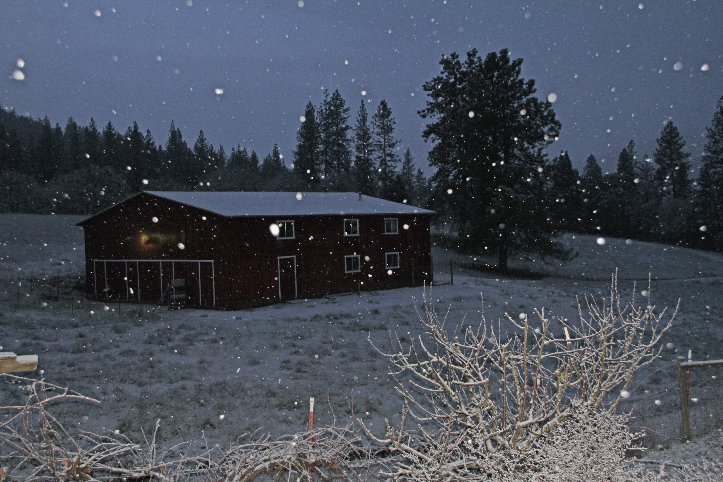 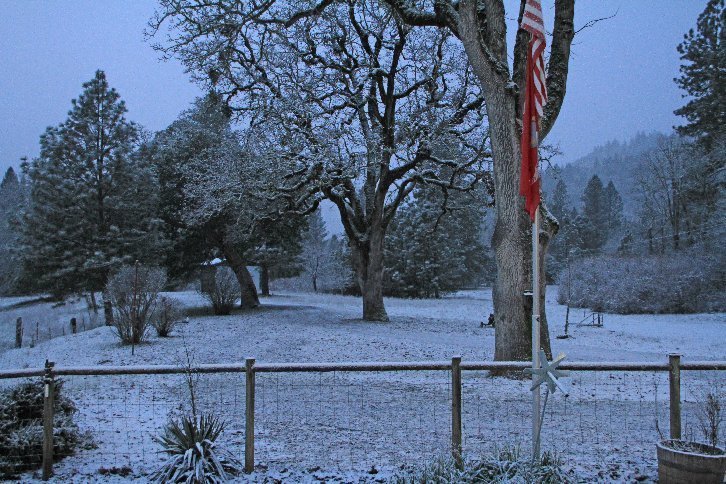 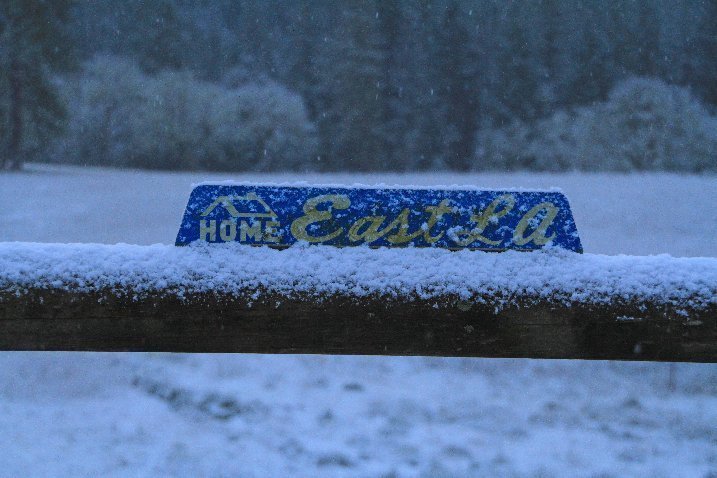 I had to go out and brush off the satellite dish so the TV would work... Here is the video I took of the snowfall before 10am yesterday:
https://www.youtube.com/watch?v=AWfmssdFSUw&feature=youtu.be
About 11am it started raining and the snow was melting off... it was 38º by then. By 12:45 the snow started down again, and of course I had to  take the trash to the road. I got snowed on!!! LOL.
For breakfast I put the rest of the scalloped potatoes left from dinner in a bowl, some olive oil, added two eggs, pricked the yolks with a sharp knife, topped with garlic salt... cooked in the microwave with the saucer on top on high for 2 minutes. 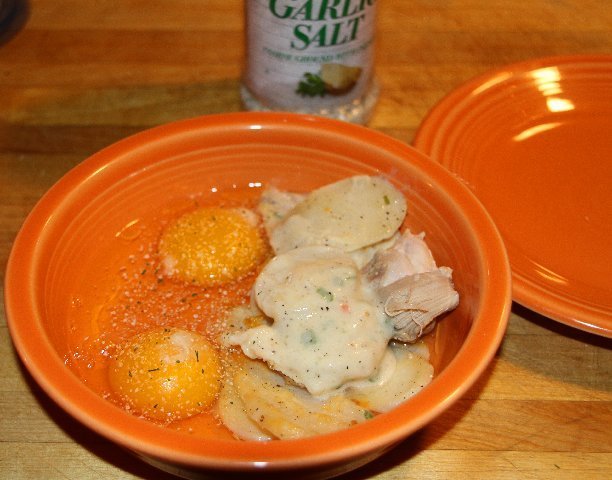 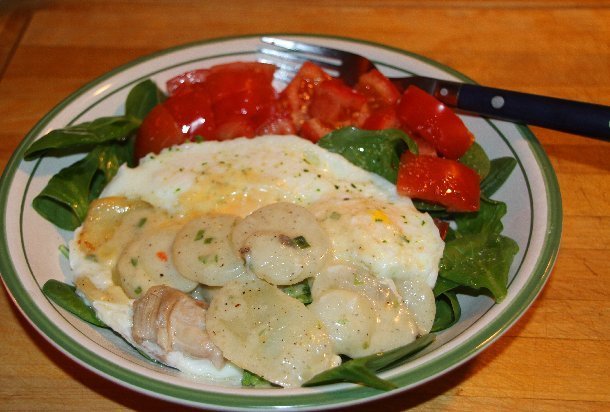 Birds were out around the feeders yesterday.. 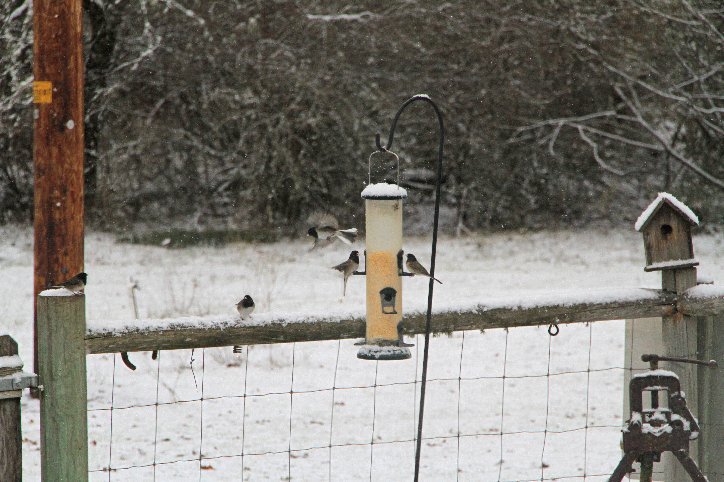 Turkeys looking for eats too... 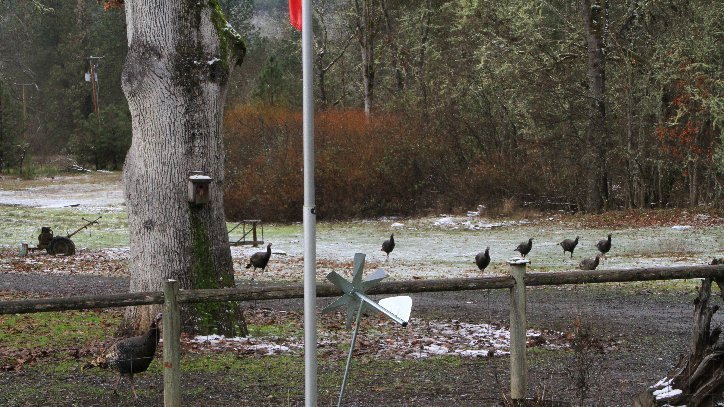 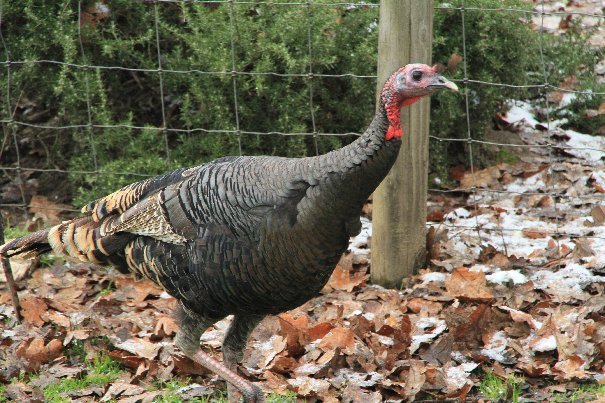 The NFL scores from yesterday's games: 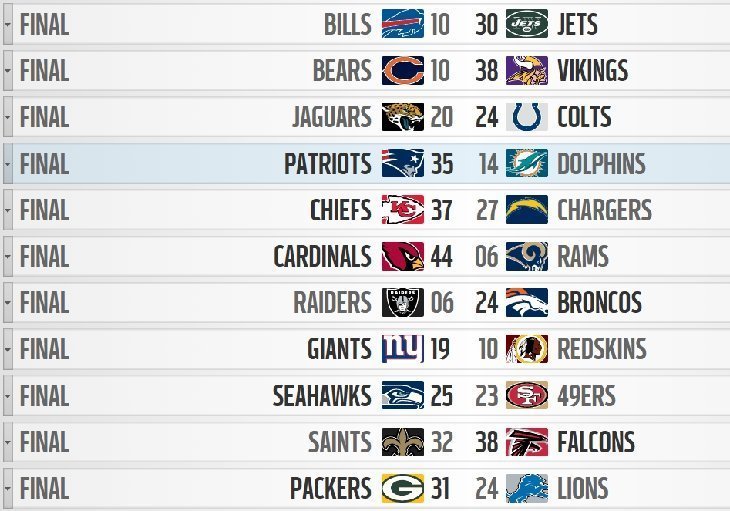 A great day for some of us... a sad day for others! Thank goodness the 9ers lost!!!! Can you believe it that the 49ers are going to give Kapperass a "prestigious award for inspirational courage" ?????? WHAAAAA???? The whole team voted. What a bunch of total jerks!!!!
This was an interesting article I found about the Rose Parade and LASD's participation and Sherman Blocks response...
http://articles.latimes.com/1991-11-28/local/me-214_1_alleged-white-supremacist 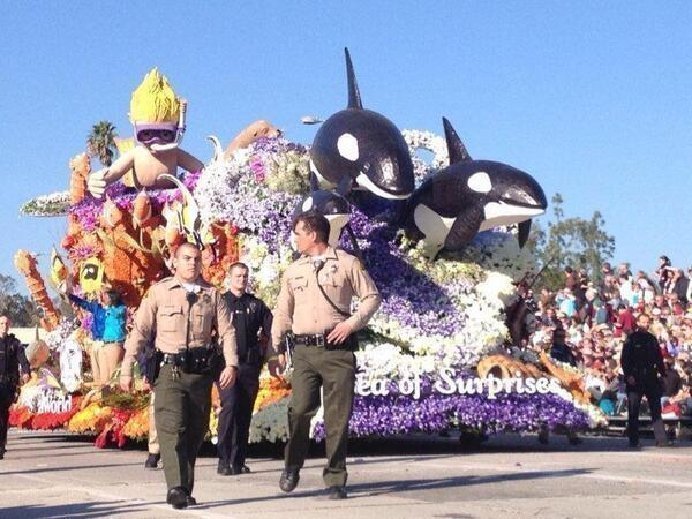 Most of the time when I worked the Rose Parade it was at the corner of Orange Grove and Colorado. One year I escorted our Sheriff Block to his seat in the grandstand. 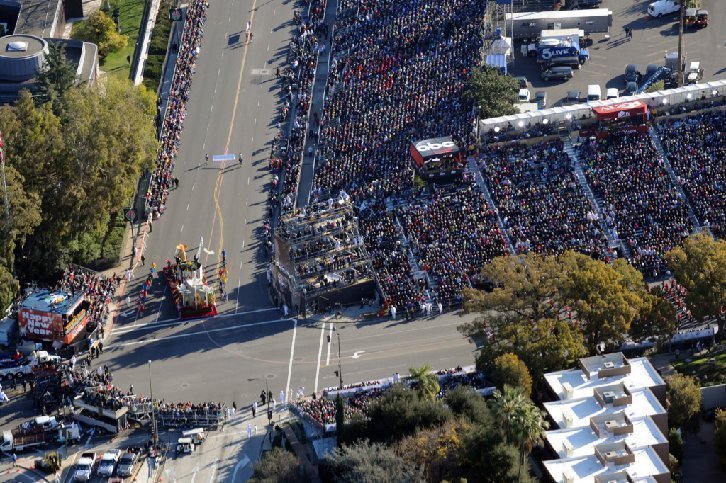 Another year a bunch of protesters sat down on Colorado in front of the Queen's Float. We had to "escort" them off the parade route, take names, etc. That intersection is where the cameras are and it was on TV. My nephew called my sister screaming, "I just saw Aunt Sue on the TV!" LOL.
Since some of the floats were put together in Irwindale, they had to be escorted back to the float builders building after the viewing was over. So, a couple of times I worked with Temple deputies to bring the floats back in the middle of the night. Normally a float goes about 5mph in the parade and also when going to Pasadena, but on the way back they hit 30-40mph and you should have seen the flowers come blowing off!!! It was funny! 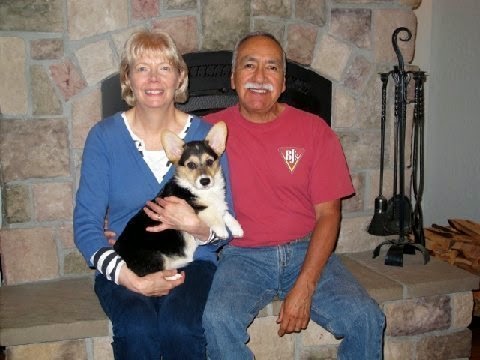 Historically this date.....
1974 – President Richard Nixon signs a bill lowering the maximum U.S. speed limit to 55 MPH in order to conserve gasoline during an OPEC embargo 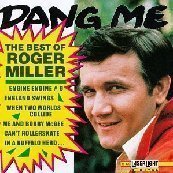 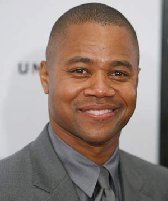 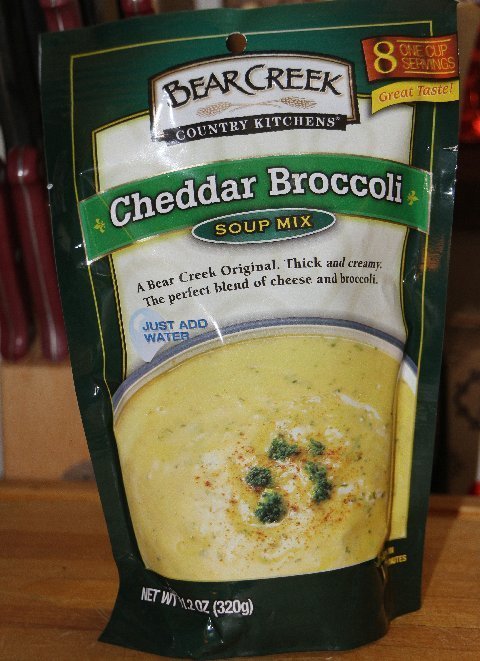 Basically you boil water and add the soup mix and simmer. I went a step farther.. 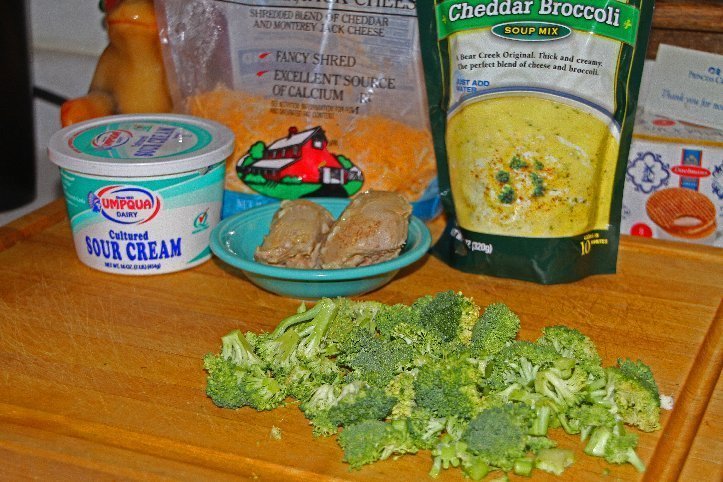 I cut up some broccoli and added it in and then let it simmer... Then added in 1/2 cup sour cream, 1 cup grated cheddar/jack cheese, and 2 cut up cooked boneless skinless chicken thighs .... 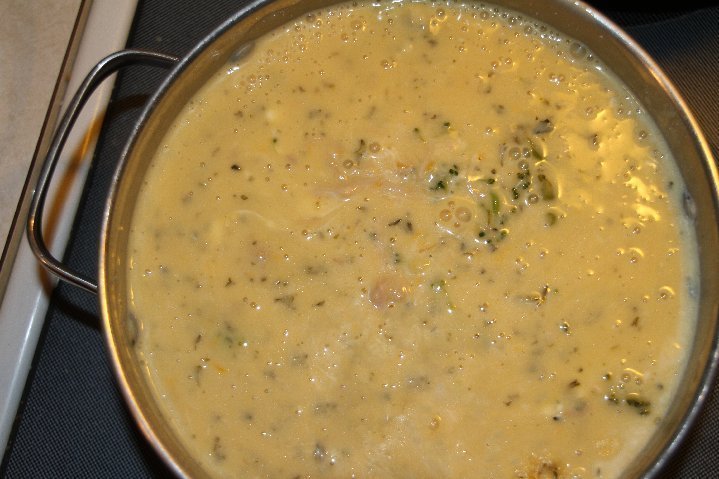 OMGOSH is this ever good!!!!

And since yesterday was "bloody mary day" I had one! 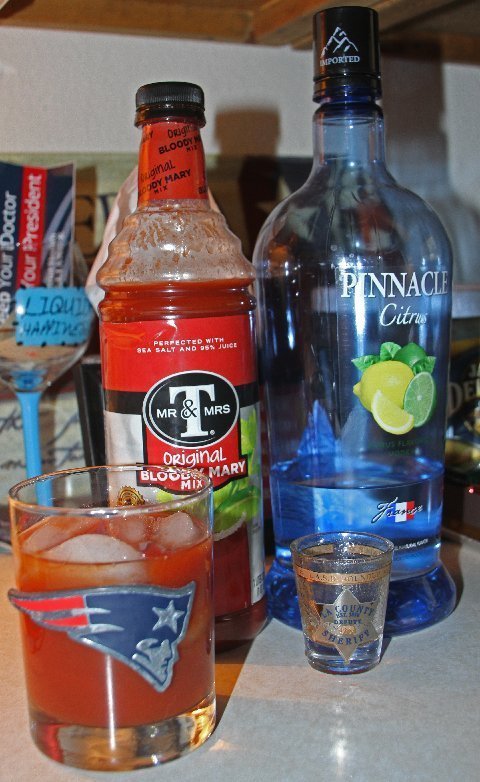 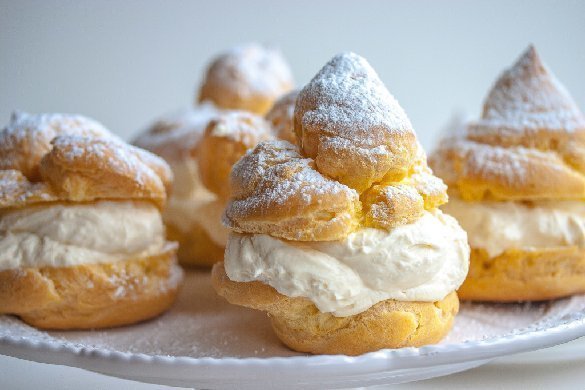 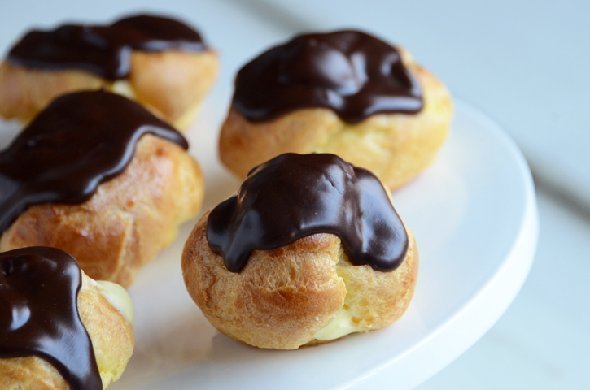 http://www.thenibble.com/REVIEWS/main/cookies/pastry/cream-puff-recipe.asp
Posted by Oregon Sue at 8:36 AM No comments: