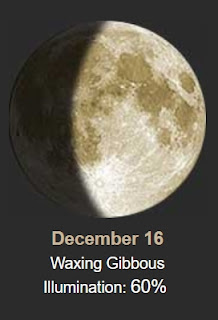 Good 42º very cloudy morning.
We are under a wind advisory through tomorrow and 100% chance of rain today. Stayin' in!
Yesterday I managed to get out and do a little shopping. I wore my red sweatshirt.... 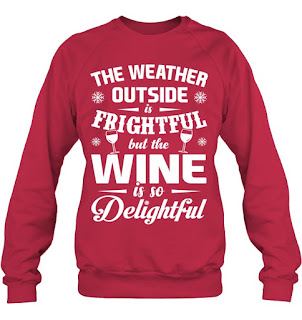 It always gets lots of comments and laughs!

The weather stayed the same old cloudy and cool all day. We warmed to 46º. 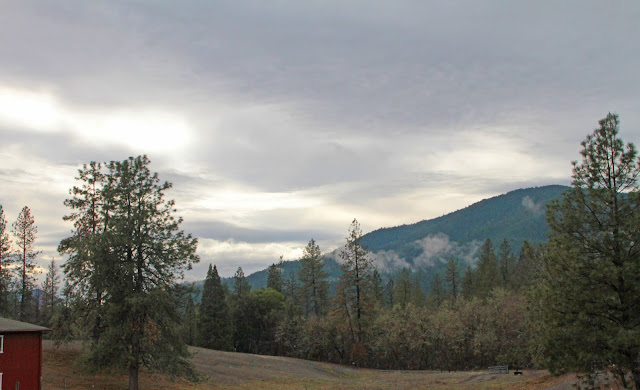 Bruiser is such and investigator. He likes to sit on the fence posts and watch the pasture for something interesting. But, when I step outside with my camera to take his picture, he immediately moves! 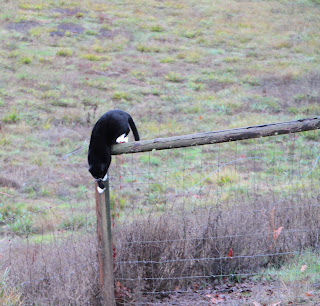 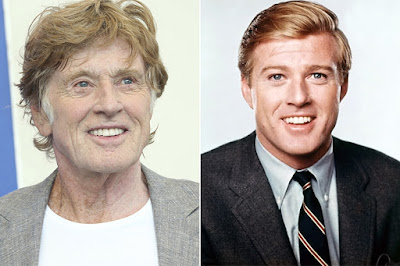 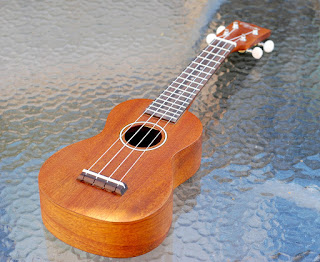 The word ukulele in Hawaiian means jumping flea. The term is used to refer to a musical string instrument (plucked, nylon stringed instrument usually played with the bare thumb and/or fingertips, or a felt pick). Today the ukulele is used worldwide. It is featured in TV shows, movies, opera, etc. and is especially poplar with millions of individuals in the countries of Japan, Canada, the United Kingdom, and the United States.
In the 19th century, a former British army officer named Edward Purvis was living in Hawaii. He became an official at the royal court of King Kalakaua. Purvis was given the Hawaiian nickname of 'Ukulele'. He was considered to be a small and lively person and therefore, he was called Ukulele ("jumping flea") by friends and others.
When Portuguese immigrants arrived in the Hawaiian Islands in 1879, they brought several of their native musical instruments. One of the instruments was a small four-stringed guitar. Purvis liked this new instrument. He learned to play it. In time the small guitar became a general favorite with everyone on the islands. It took the nickname ukulele of the man (Purvis) who had made it popular and had completely incorporated its use in and outside of the Hawaiian society. 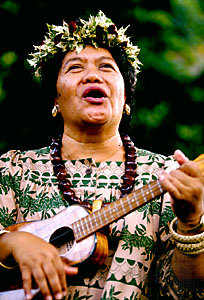 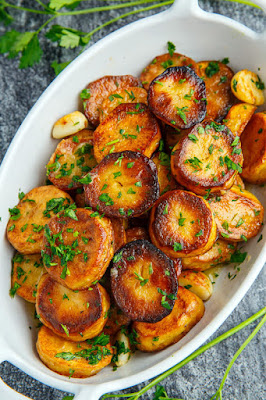 Magical roasted potatoes that are crispy on the outside and melt in your mouth on the inside in a tasty lemon an garlic sauce!
Looking for a side dish for tonights dinner? These melting potatoes are amazing! They are roasted in butter in a pan until the edges are all nice and golden brown and crispy before they are finished by roasting in a lemon and garlic chicken broth/sauce until the insides are so nice and soft that they melt in your moth! These melting potatoes are one of those game changing side dishes that once you try them, you’ll never go back! 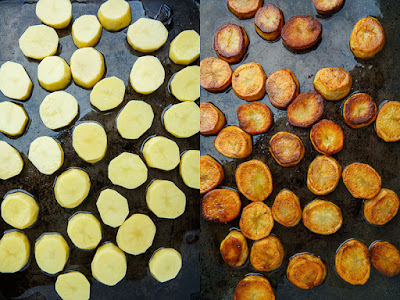 1773 – American Revolution: Boston Tea Party – Members of the Sons of Liberty disguised as Mohawksdump crates of tea into Boston harbor as a protest against the Tea Act.


1811 – The first two in a series of four severe earthquakes occur in the vicinity of New Madrid, Missouri. These four so-called mega-quakes are believed to be an ongoing cataclysmic danger that could reprise the 1811-12 series of 2,000 quakes that affected the lands of what would be eight of today's heartland states of the United States.

1985 – Mafia: In New York City, Paul Castellano and Thomas Bilotti are shot dead on the orders of John Gotti, who assumes leadership of the Gambino family.
2003 – President George W. Bush signs the CAN-SPAM Act of 2003 into law. The law establishes the United States' first national standards for the sending of commercial e-mail and requires the Federal Trade Commission to enforce its provisions.

And births this date include...
1938 – Liv Ullmann, Norwegian actress 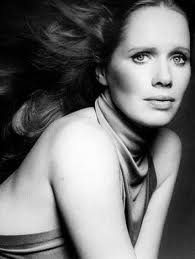 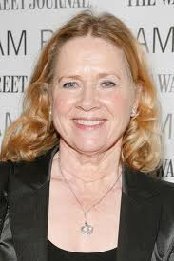 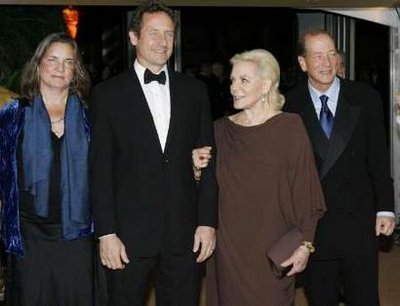 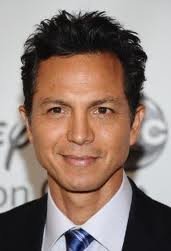 Later dinner was Schwans 3 Cheese & Spinach Ravioli I dumped in boiling water, cooked, and drained. Then I put some cheese soup and some white clam sauce in a pan and heated it......... 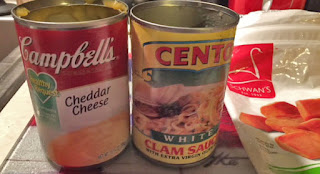 Added in the ravioli and some of Schwans roasted sweet potatoes.... 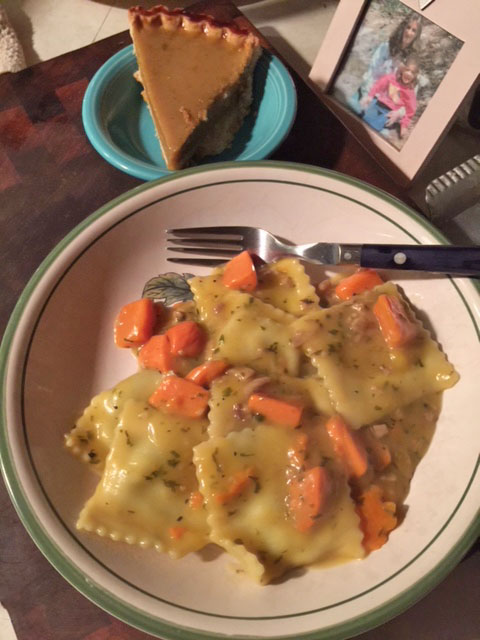 SUPER GOOD!!!
That and a piece of pumpkin pie for dessert!
All I know. Nuff said. Happy Sunday. Ciao.
xo Sue Mom Bobo 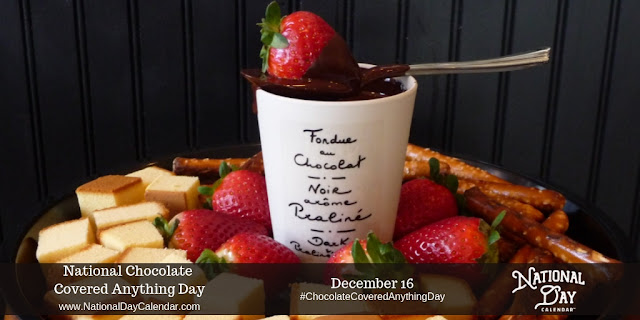 If you are a chocolate lover, December 16th is your day!  If you could cover anything in chocolate, what would it be? It’s National Chocolate Covered Anything Day! There are so many foods that are improved by covering them in chocolate, we do not have time to list them all.  So go ahead, indulge, as this day is a chocolate lovers dream come true.
HOW TO OBSERVE
Pick up some chocolate covered anything or try your hand a coating chocolate on one of your favorite treats.
(Chocolate covered bacon..... huh, Karen?) 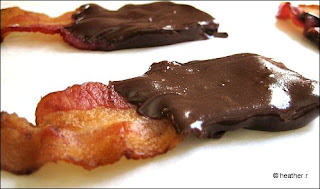