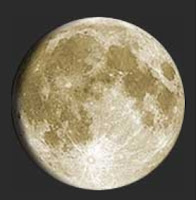 Moon phase... June 16 waxing gibbous  99%
Good 48º clear sunny morning.
HAPPY FATHER'S DAY to all the dads out there!
My Dad and I (playhouse in background he built!) 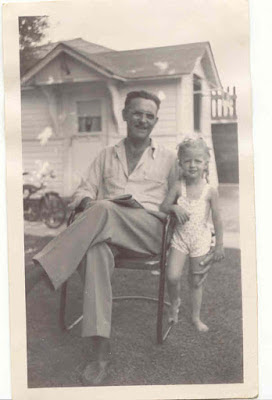 Son Brian with his Sami and Tucker 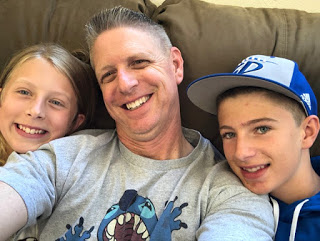 Step-son Aaron with his Maddie 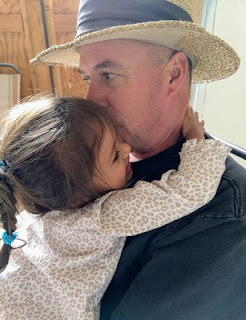 Yesterday I went to the So Oregon Emergency Veterinary Hospital to pick up Bruiser. He had this cone on him and NOT HAPPY! 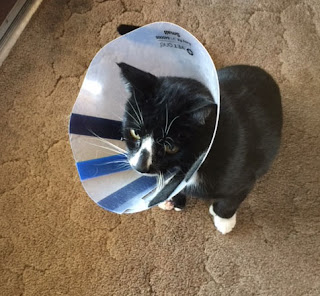 I let him out of the carrier in the house and all he did is run into everything! Now I have to give him pills for a couple days. That will be interesting. Shove a pill down a cat's throat??? OMG. Took off the cone, and he's happier now.  His foot where the abscess was is looking fine.
Picture of the Day ... old gas station. Uniforms were worn by the attendees to pump gas, check oil, and wash windows! 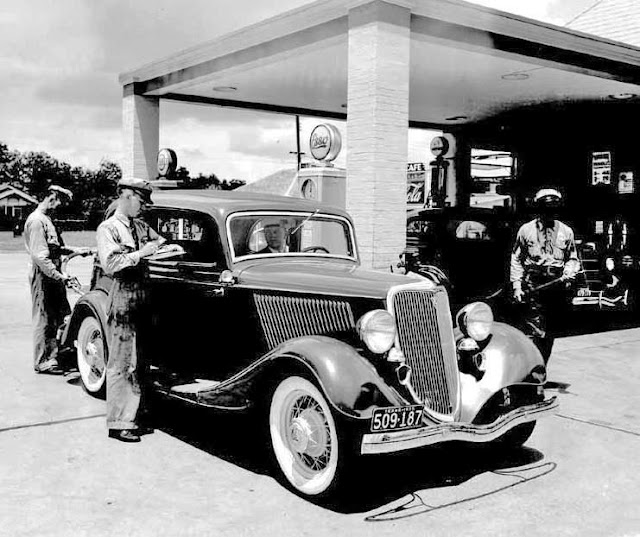 Interesting about the California Condor... 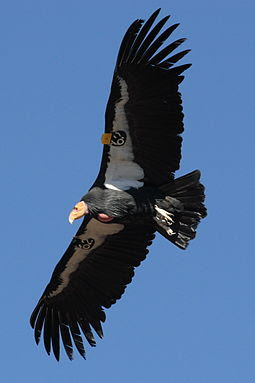 The California Condor (Gymnogyps californianus) is a New World vulture, the largest North American land bird. This condor became extinct in the wild in 1987 (all remaining wild individuals were captured), but the species has since been reintroduced to northern Arizona and southern Utah (including the Grand Canyon area and Zion National Park), the coastal mountains of central and southern California, and northern Baja California. Although other fossil members are known, it is the only surviving member of the genus Gymnogyps. The species is listed by the IUCN as critically endangered. 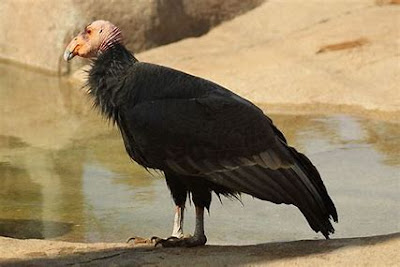 The plumage is black with patches of white on the underside of the wings; the head is largely bald, with skin color ranging from gray on young birds to yellow and bright orange on breeding adults. Its 9.8 ft wingspan is the widest of any North American bird, and its weight of up to 26 lb nearly equals that of the trumpeter swan, the heaviest among native North American bird species. The condor is a scavenger and eats large amounts of carrion. It is one of the world's longest-living birds, with a lifespan of up to 60 years

Condor numbers dramatically declined in the 20th century due to poaching, lead poisoning, and habitat destruction. A conservation plan was put in place by the United States government that led to the capture of all the remaining wild condors which was completed in 1987, with a total population of 27 individuals. These surviving birds were bred at the San Diego Wild Animal Park and the Los Angeles Zoo. Numbers rose through captive breeding and, beginning in 1991, condors were reintroduced into the wild. Since then, its population has grown, but the California condor remains one of the world's rarest bird species: as of 2017 there are 463 California condors living wild or in captivity.
The condor is a significant bird to many Californian Native American groups and plays an important role in several of their traditional myths. 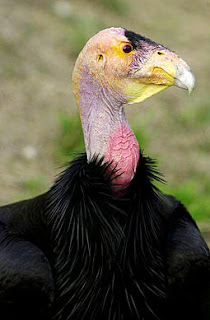 At the time of human settlement of the Americas, the California condor was widespread across North America; condor bones from the late Pleistocene have been found at the Cutler Fossil Site in southern Florida. However, at the end of the last glacial period came the extinction of the megafauna that led to a subsequent reduction in range and population. Five hundred years ago, the California condor roamed across the American Southwest and West Coast. Faunal remains of condors have been found documented in Arizona, Nevada, New Mexico, and Texas. The Lewis and Clark Expedition of the early 19th century reported on their sighting and shooting of California condors near the mouth of the Columbia River.

Condor bones have been found in Native American graves, as have condor feather headdresses. Cave paintings of condors have also been discovered. Some tribes ritually killed condors to make ceremonial clothing out of their feathers. Shamans then danced while wearing these to reach the upper and lower spiritual worlds. Whenever a shaman died, his clothes were said to be cursed,[90] so new clothing had to be made for his successor. Some scientists, such as Noel Snyder, believe that this process of making ceremonial clothing contributed to the condor's decline.
Asparagus Artichoke Breakfast Casserole from Kevin the Closet Cook... 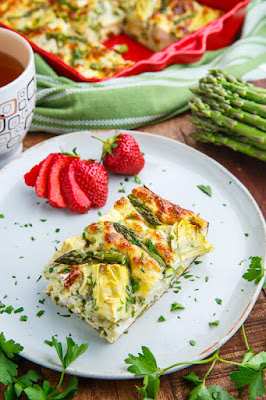 A light, healthy and tasty summer breakfast casserole with asparagus, artichokes and plenty of cheese 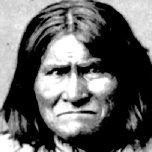 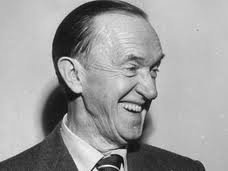 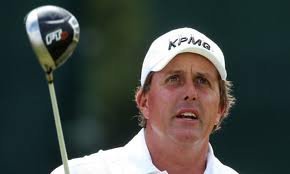 On Thursday June 13 I wrote about peacock feathers and white feathers.... Here is more about the spiritual meaning of white feathers..https://www.reference.com/world-view/spiritual-meaning-white-feather-f432917882412386
I got a note from a friend who said:
Re your article on peacock feathers and the significance of a white feather: "White feathers signify either a guardian angel or a loving message from a loved one who is not alive. If you are gifted with a white feather you should save it and keep it close"
I was working a homicide one Saturday morning behind the Pico Rivera library in the mid-1990's. The body of a 17yr old was found there. He had typically cut through the parking lot as a shortcut on his way home from work at night at a Jack-in-The Box when he was confronted by some gang-bangers and shot when he had the wrong answers to their questions. As I was stooping over his body a fluffy white feather slowly flew down and landed on his chest. Looking up there wasn't a bird flying over or even a tree where the feather might have come from. It seemed very significant at the time, but I never told anyone of the incident. You're the first. 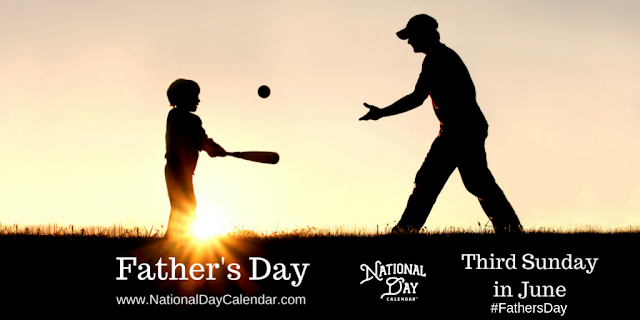 Father’s Day is observed annually on the third Sunday in June.  This day is set aside to honor the role that fathers play in the family structure and society.
After the success of Mother’s Day, Father’s Day observances began to appear.  The road to this national observance was not easy.
Posted by Oregon Sue at 7:04 AM 1 comment: