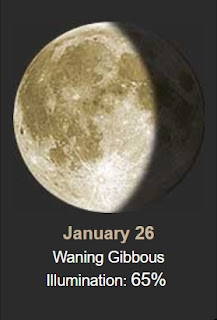 Good 36º super foggy morning.
Yesterday basically the same as it's been........ gloom all day 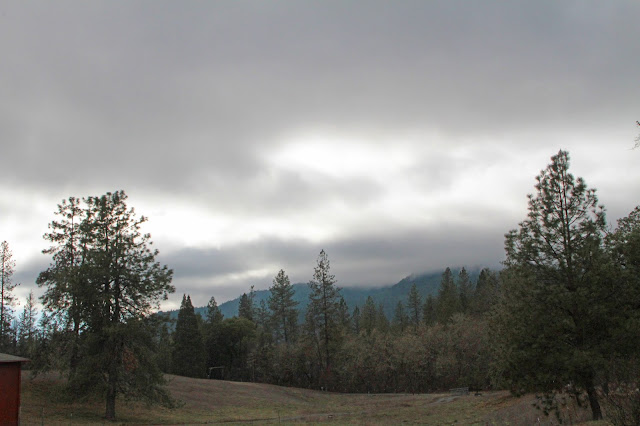 and we stayed in the mid 40ºs.
On the other hand a few miles away, Grants Pass had sunshine.... 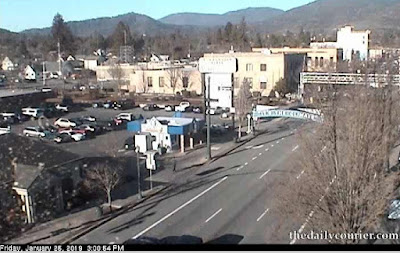 and so did Medford! 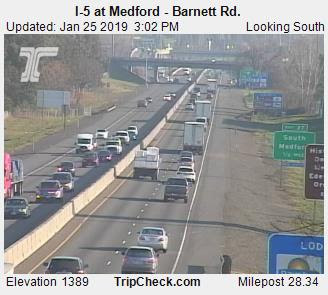 Did a quick run into town to the post office for a package. Stood in line quite a while and had a fun conversation with the guy in front of me... older, ponytail, and a number of missing teeth. But, he had on a "Guns and Drugs" baseball cap. 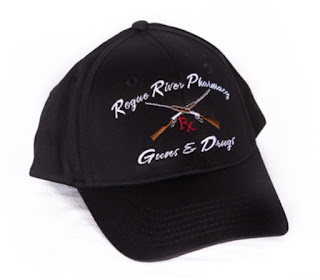 That is the theme of our local drug store. They sell guns and have a pharmacy. When we first moved here Jerry worked there in the gun department for awhile. They have a number of shirts/hats with that logo. We did have a bumper sticker once with the logo on it and a CHP came up on our bumper in California and read it~!!! Jerry saw him laughing!
http://www.gunsanddrugsclothing.com/ 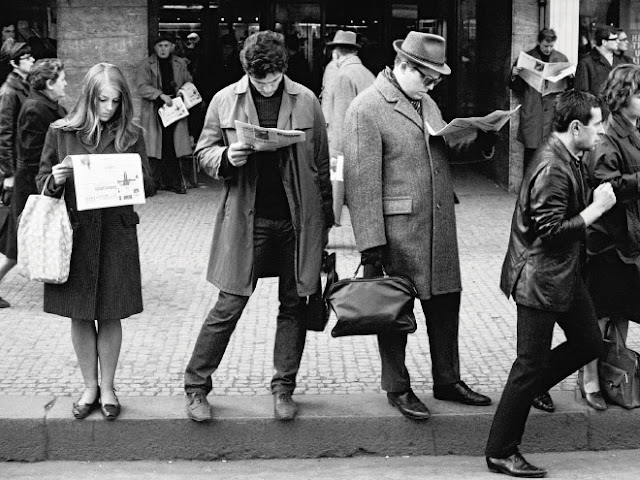 In 1853, the California gold rush was in full swing, and everyday items were in short supply. Levi Strauss, a 24-year-old German immigrant, left New York for San Francisco with a small supply of dry goods with the intention of opening a branch of his brother's New York dry goods business. Shortly after his arrival, a prospector wanted to know what Mr. Levi Strauss was selling. When Strauss told him he had rough canvas to use for tents and wagon covers, the prospector said, "You should have brought pants!," saying he couldn’t find a pair of pants strong enough to last.
Levi Strauss had the canvas made into waist overalls. Miners liked the pants, but complained that they tended to chafe. Levi Strauss substituted a twilled cotton cloth from France called "serge de Nimes." The fabric later became known as denim and the pants were nicknamed blue jeans. 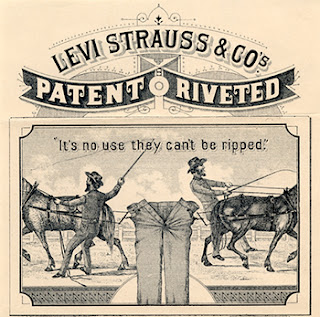 Levi Strauss and a Reno Nevada-based Latvian tailor by the name of Jacob Davis co-patented the process of putting rivets in pants for strength. On May 20, 1873, they received U.S. Patent No.139,121. This date is now considered the official birthday of "blue jeans."

Today's Levi's are made overseas, and there is only one line of jeans made in the US, in Greensboro, NC. The company's corporate headquarters is located in the Levi's Plaza in San Francisco.
By the 1990s, Levi's faced competition from other brands and cheaper products from overseas, and began accelerating the pace of its US factory-closures and its use of offshore subcontracting agreements. In 1991, Levi Strauss became implicated in a scandal involving pants made in the Northern Mariana Islands: some 3% of Levi's jeans sold annually with the Made in the USA label were shown to have been made by Chinese laborers under what the United States Department of Labor called "slavelike" conditions. As of 2016, most Levi's jeans are made outside the US, though a few of the higher-end, more expensive styles are still made in the U.S.
Cited for sub-minimum wages, seven-day work weeks with 12-hour shifts, poor living conditions and other indignities, Tan Holdings Corporation, Levi Strauss' Marianas subcontractor, paid what were then the largest fines in U.S. labor history, distributing more than $9 million in restitution to some 1,200 employees. Levi Strauss claimed no knowledge of the offenses, then severed ties to the Tan family and instituted labor reforms and inspection practices in its offshore facilities.

On May 8, 2013, the NFL's San Francisco 49ers announced that Levi Strauss & Co. had purchased the naming rights to their new stadium in Santa Clara, California. The naming-rights deal called for Levi's to pay $220.3 million to the city of Santa Clara and to the 49ers over twenty years, with an option to extend the deal for another five years for around $75 million. As of 2016, Levi Strauss Signature jeans are sold in 110 countries.

In 2016, the company reported revenues of $4.6 billion.
On July 13, 2017, Levi Strauss heir Bill Goldman died in a private plane crash near Sonoma, California.

** When Jerry found out that his favorite jeans were not made in the USA he stopped buying them. In Oregon there is a brand called Prison Blues, "made on the inside to be worn on the outside". They are made by inmates at a prison in Pendleton Oregon. They can be bought at many places around the county. Jerry said they were "the best"! They are sold at Kohls, Walmart, Amazon, and a number of places, or on line... http://www.prisonblues.net/ 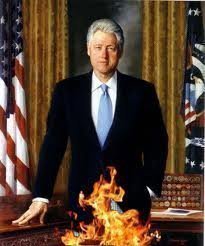 ** and just think, 15 years later minus 2 days his wife lies when testifying before house and senate panels re Benghazi. Geeze, you wonder if those two even have a remote idea of what the "truth" is!!! I think not. Whatever paddles their boat is what they go with.
2005 – Glendale train crash: Two trains derail killing 11 and injuring 200 in Glendale, California, near Los Angeles.
And births this date include...
1880 – Douglas MacArthur, American general, Medal of Honor recipient (d. 1964) 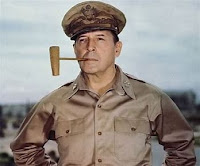 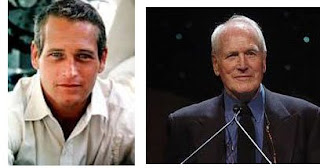 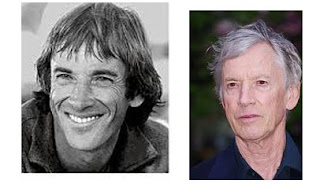 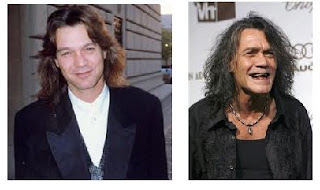 Later dinner was an Omaha Steaks marinated salmon filet cooked in the air fryer and a bowl of cooked broccoli/cauliflower/carrots. Those salmon filets are a fav of mine. So good, tender, and moist! 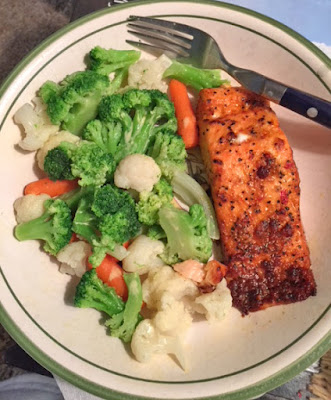 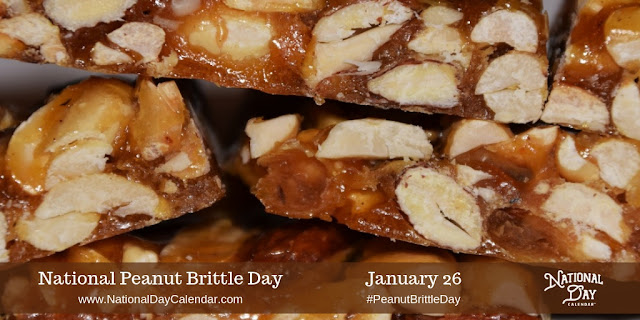 National Peanut Brittle Day is observed on January 26. A hard, flat candy confection, peanut brittle is enjoyed throughout the United States.
Peanut Brittle includes caramelized sugar or corn syrup. Nuts are added to the molten sugar and then pour onto a flat surface such as granite or marble and smoothed into a thin sheet. The candy cools into a hard, brittle treat that is broken into smaller pieces. Some of the best brittles are hand stretch into a thin, easily cracked candy that melts in the mouth.
The history of peanut brittle is uncertain, though one legend says it was all a mistake. The story goes that a southern woman was making taffy and instead of using cream of tartar, she used baking soda by accident.
HOW TO OBSERVE
Try this peanut brittle recipe:
Mom’s Best Peanut Brittle recipe.