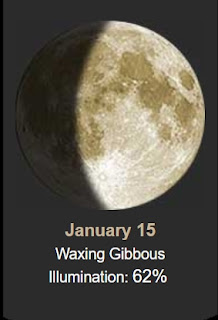 Yesterday again it was clear for a while, then some clouds came in... Still nice, warmed to 62º. In the first picture you can see the ice on the barn roof..... 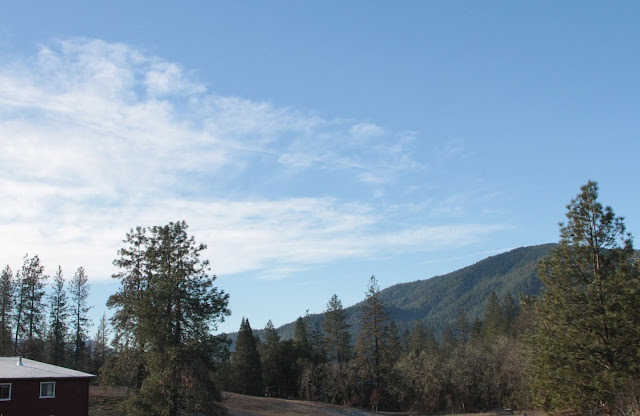 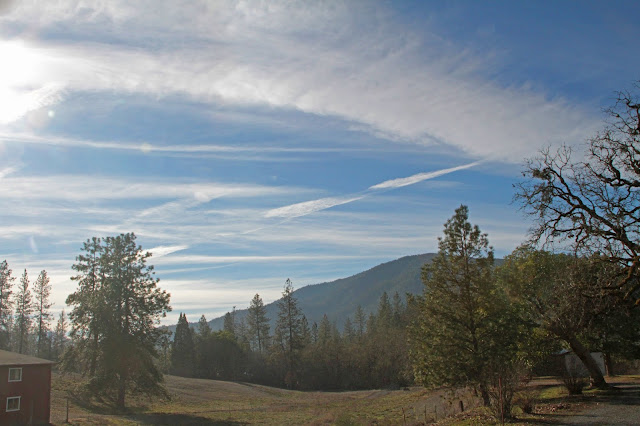 Picture of the Day....  Steam and smoke rise into the sky as lava from Kilauea meets the Pacific Ocean off the big island of Hawaii. The volcano is one of the most active in the world, recently erupting in May 2018. 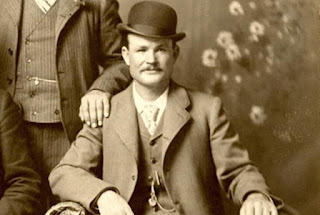 Butch Cassidy was born Robert LeRoy Parker on April 13, 1866 in Beaver, Utah.
Cassidy’s first recorded criminal offense occurred around 1880, when he stole a pair of jeans. To his credit, the teen left an IOU. The store’s owner pressed charges, but the soon-to-be outlaw was acquitted.
After leaving home in his teens to find work, Cassidy—then still known as Parker—took a variety of jobs on ranches and dairy farms. He spent some time working as a butcher in Rock Springs, Wyoming, which is how many theorize he came to be known as “Butcher,” which was later shortened to “Butch.”
Why Cassidy? That’s a trickier tale. During his time at one ranch, Butch reputedly met small-time cattle thief J.T. McClammy, who went by the alias Mike Cassidy. The legend goes that Butch came to see McClammy as something of a mentor and so adopted the surname.

Cassidy was believed to be involved in his first bank robbery in 1889, when he and three others made off with more than $20,000 from a bank in Telluride, Colorado. However, the law didn’t catch up with him until 1894, when he was found guilty of horse theft. He was sentenced to two years in prison, but released after 18 months. 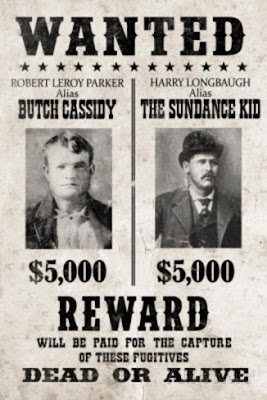 As odd as it sounds to think of an outlaw who disliked getting rough, records and personal recollections from the era all describe Cassidy as a very polite man who avoided violence whenever possible. He may have waved a gun around when robbing trains and banks, but he didn’t use it. Those who knew him said that one of his proudest claims was that he never killed a man.
Although they were known as Butch Cassidy’s Wild Bunch, with Cassidy serving as the intrepid leader, recent scholarship has questioned this idea as “romantic mythmaking.” Joe LeFors, who was one of the lawmen who chased the gang in the late 19th century, only mentions Cassidy once in his memoirs, and never mentions the Sundance Kid. The historians who subscribe to this theory think that Harvey Logan (Kid Curry) and Will “News” Carver were the actual forces behind the success of the gang.
Despite what was portrayed in the Oscar-winning movie, there’s little indication that Butch and Sundance were in fact best friends. They were both members of the Wild Bunch gang, but Butch was closer to William Ellsworth “Elzy” Lay. Butch and Sundance later owned property together in Argentina, although it is not clear whether they fled to South America together or if Butch joined Sundance at a later date.
Butch and Sundance were killed in early November of 1908 following a shootout with authorities in Bolivia … or were they? Some historians argue that there is no real evidence that the two men were involved in the payroll robbery that led to the shootout, or that they were even involved in the shootout itself. Several alternative theories have arisen, claiming that the outlaws were not killed that day.
Josie Bassett, an acquaintance of the Wild Bunch, claimed that Cassidy visited her in the 1920s and that he “died in Johnnie, Nevada … He was an old man when he died. He had been living in Oregon, and back east for a long time, where he worked for a railroad.”
By far, the most popular theory is that Butch may never even have gone to Bolivia. Rather, he left Argentina in early 1908, adopted the name William T. Phillips, got married, and passed away (anonymously) in Spokane, Washington in 1937. Butch’s younger sister Lula added credence to this in her 1975 book, Butch Cassidy, My Brother, saying that he visited her and their father at the family home in 1925. A handwriting analyst also claimed that Butch Cassidy, Robert LeRoy Parker, and William T. Phillips were one and the same. But the main proponent of this theory, Larry Pointer, has recently said that he was wrong and Phillips was not actually Cassidy.
In 2009, an unabridged copy of Phillips' Bandit Invincible, a Cassidy biography, emerged. And following clues, Pointer came to the conclusion that William Phillips was actually another Wild West outlaw named William Wilcox. So for the moment, the mystery lives on. 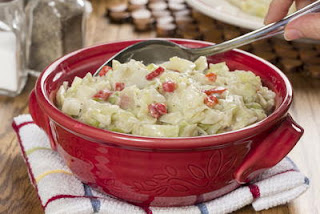 I posted the Creamy Cabbage recipe on my blog Saturday January 12th. This was the comment my friend Trish sent me re that recipe:
"Sue, last night I made that wonderful cream cabbage!  OMG it was so good that everyone slurped it all gone.  None left!"
Sorry, no recipe today. 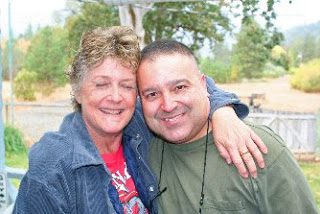 A super guy, worked at ELA when I worked there. Came by to give me a hug after Jerry passed away! HAPPY BIRTHDAY AL!!! 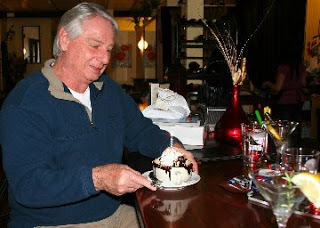 Historically this date...
1870 – A political cartoon for the first time symbolizes the Democratic Party with a donkey ("A Live Jackass Kicking a Dead Lion" by Thomas Nast for Harper's Weekly).


1947 – The brutalized corpse of Elizabeth Short ("The Black Dahlia") is found in Leimert Park, Los Angeles.


2009 – US Airways Flight 1549 makes an emergency landing in the Hudson River shortly after takeoff from LaGuardia Airport in New York, New York. All passengers and crew members survive. 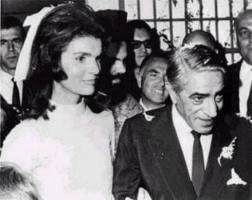 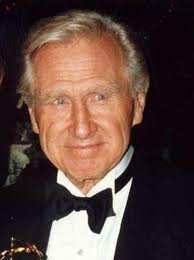 "It should come as no surprise that Dr. Martin Luther King, Jr. was a Republican. In that era, almost all black Americans were Republicans. Why? From its founding in 1854 as the anti-slavery party until today, the Republican Party has championed freedom and civil rights for blacks. And as one pundit so succinctly stated, the Democrat Party is as it always has been, the party of the four S's: slavery, secession, segregation and now socialism." 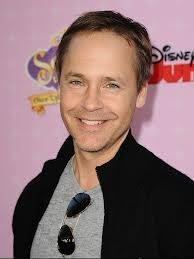 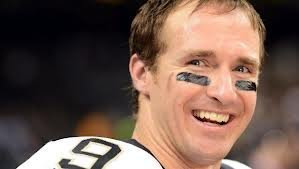 I went to town yesterday... post office and market. At the market the gentleman who checked me out is a manager, new, as I had not seen him before. Anyway, I asked him if the 25º morning bugged him. He said no, he had lived not too long ago in Tahoe. Ahhhh, I said my sister lived there and had a real estate office in Tahoe City, that my nephew now runs. He, Bruce, said he worked in real estate too, but at South Shore. He had also lived in Los Angeles once and had been a cop! OMGOSH, we chatted and chatted. Lots in common. That was fun. Super nice guy. I told him that my license plate has 417 on it (and it stands for a California Penal Code for "brandishing a firearm in a rude or threatening manner" and it's also a radio code for "person with a gun".) He said he had forgotten most of the codes. I told him an older gentleman asked me once what my license meant. I told him. He then put his arm around my shoulder and asked,"Is that what they got you for?" LOL!!!!!!

Later for dinner I had a Schwans "Classic Crust Mexican-Style Supreme Pizza". 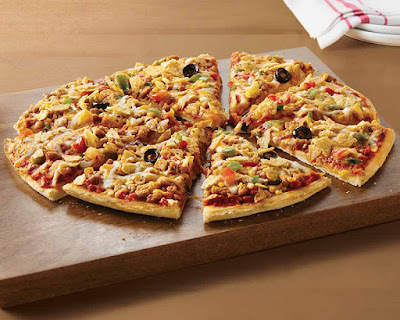 " Our 12-inch special-recipe pizza, featuring our traditional, crispy crust, is topped with a blend of mozzarella and cheddar cheeses, Mexican-style sausage, a spicy sauce, crunchy tortilla chips, green chilies, tomatoes, onions, black olives and bell peppers." And the pizza is only $4.99 ! It will serve 2 easily, or 3. 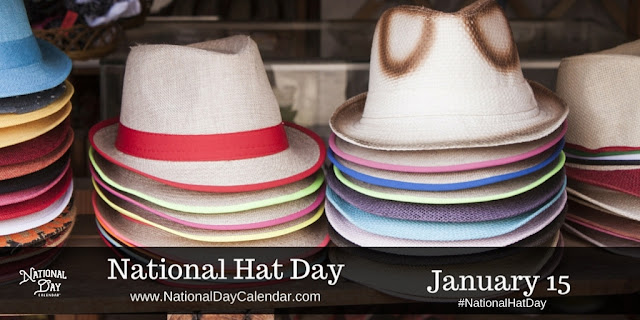 Hang on to your hats and celebrate in style on January 15.   Millions will participate in National Hat Day.
Depending on where you live, if you are outside in the middle of a cold January, you may definitely want to wear a hat on National Hat Day! 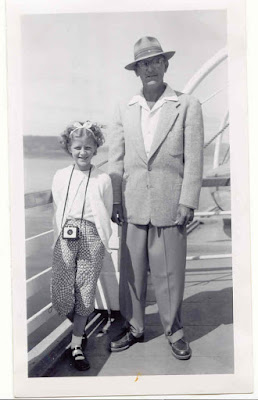